Satisfaction on a Stick

When the weather heats up, Evansvillians cool down with Lollys Pop Bar’s artisan popsicles. 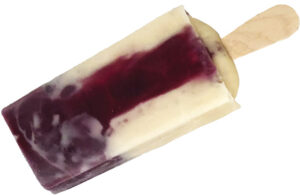 “I’ll get bored and just make up some flavors, and sometimes they sell out really fast,” owner Todd Megar says.

Megar, who moved to Evansville from Texas in 2009, takes inspiration from his southern roots, even importing all the equipment used to make the frozen treats from Brazil, where paletas — natural ingredient popsicles — are common.

The pops are frozen at about -10 degrees in stainless steel molds. Megar says he keeps the pops flavorful by not adding water. All of Lollys’ popsicles, including the specialty pops, are $4.

“We keep it simple,” he says. “It’s become kind of iconic. We have like a cult following now.”

Lollys Pop Bar is open for scheduled catering events April through November, though you can find it at pop-up events around town or at Farm 57 on Wednesday evenings and the Franklin Street Bazaar on Saturday mornings. The artisan ice pops also are available at Tri-State retail locations including Honey Moon Coffee Co., Henderson Juice Co., Thrive Dance Company, and Black Lodge Coffee Roasters in New Harmony, Indiana.