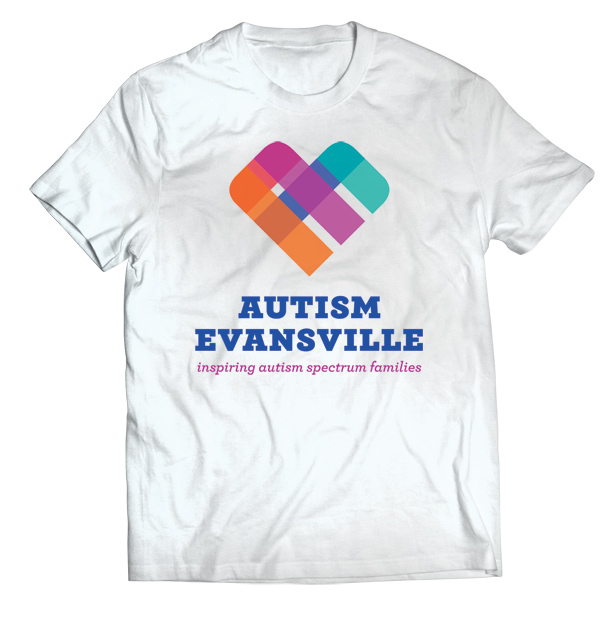 Rain fell on a metal Vanderburgh County 4-H Center roof, above a board draped in black cloth. A crowd, gathered April 30 for the fourth annual IASF Walk for Autism and 5K, anticipated the big reveal.

Just over a year prior, members of the Evansville Design Group’s Design for Good committee sat down with about 10 requests from local nonprofits.

“These are organizations that didn’t spend any money on design and weren’t actively looking for clients,” says Evansville Design Group President Matt Wagner.

“But they had a need,” says Design for Good Chair Bryan Horstman, “and they knew something was missing.”
Local organizations, however, have not always had EDG and the Design for Good initiative to turn to.

Around 2010, the area’s passionate designers began meeting at Turoni’s Main Street Pizzery to discuss Evansville’s demand for a cohesive group of creative problem-solvers.

Slowly, meetings grew into a formal nonprofit organization, which allows designers, from graphic artists to engineers, to work together on shared causes.

“All communities that are successful, that do well at talent retention, growth, and attraction, embrace design and the brand of their community,” says Wagner. “That’s a fact. So we feel like it’s our responsibility to stop waiting for people to come to us. We need to take action.”

From that mindset the Design for Good initiative was born.

“We can all learn from each other and how we do things,” says Wagner, “but also we’re teaching these nonprofits why design’s important and how to value it.”

The first official year of Design for Good, EDG called for applications from all nonprofits seeking design assistance, promising that the selected organization would receive free work on a project of choice for about a year.

By that process, the Design for Good initiative has assisted Aurora, Big Brothers Big Sisters, and The Literacy Center.

“They really got to know us,” says Jennifer Wigginton, The Literacy Center executive director. “They looked at every document that I gave them, and we started talking about what our challenges were. Honestly, it’s for individuals that need our services to find us.”

The Design for Good committee understood the challenge and researched what potential students would need in order to understand where they could find help.

The committee created a new logo and three different poster-brochure sets. One was easy to read — for prospective students. The others, aimed toward volunteers and community sponsors, involved jumbled letters — simulating the struggles of someone with a learning difference.

“It’s given us such a more professional appeal,” says Wigginton. “Organizations have asked for our brochures and our posters, rather than us going to places and saying, ‘Will you put these up?’”

Into the coming years and during work for other grant recipients, EDG has been there for The Literacy Center.

“We always keep those relationships open,” says Horstman. “It’s not one and done.”

By July 2015, EDG had narrowed the year’s Design for Good applicants down to one grant recipient, Inspiring Autism Spectrum Families, whose request was humble.

With that, the Design for Good committee asked the IASF board of directors to meet at Central Library for a presentation and discussion.
Autism Evansville President Cory Kuhlenschmidt was one of about seven board members in attendance, joined by twice as many EDG members.

“They’re engaged,” says Kuhlenschmidt, recalling the spirit of the Design for Good committee. “They’re asking questions and wanting to know more. And then they say at the end of the meeting: ‘I-A-S-F.’”

The acronym was difficult to pronounce and remember. There was no indication of the organization’s grassroots origin and local focus. The logo’s primary colors were fun but juvenile.

“We didn’t expect a rebranding to come out of the Design for Good grant because we had asked for much less than that,” says Colleen York, Autism Evansville executive director. “When they came back with this big proposal and scope of work to go along with it, it was flattering that they wanted to help us and saw so much potential, and at the same time a little overwhelming because we realized that rebranding is a big venture.”

The Design for Good team broke into subcommittees and dedicated themselves to a schedule of work for promotional material, a new logo, and a new name — Autism Evansville. Each step required extensive research into autism spectrum disorder, similar organizations, and discourse about symbols.
Woven into the final heart-shaped logo are layers of meaning.

Instead of the controversial puzzle piece, which many other autism-focused organizations employ, EDG adopted a quilt pattern. Not only does it separate Autism Evansville from national and local groups and communicate individuality and togetherness, but its handmade quality speaks to dedication and family.

The spectrum of colors in the logo represents the wide range of symptoms and severity within autism spectrum disorder, just as the old colors did. However, the new palette is more mature.

“We wanted to modernize that palette and thereby dissociate it with a lot of the national organizations,” says Horstman.
“It also feels more adult,” says Wagner. “The other one feels very childlike, and I think people forget that autism is not just kids.”

Revealed by the element of transparency are the letters of the organization, an A crossed with an E. The transparency refers to the honesty and genuine passion of everyone who works with Autism Evansville.
And then there’s the final element.

“The heart,” says Horstman. “That’s what drives everything. I mean, the people on this board and the people who volunteer for this organization work night and day.”

EDG first presented their work to York, who had just accepted the executive director position.

Then, a couple months before the IASF Walk for Autism and 5K, they pitched the rebranding to the rest of the board, which hesitated. “Autism Evansville,” they worried, had the potential to sound as though the six-county group only served one city.

Before the board made an official decision about the new name and logo, EDG had to release promotional materials for the walk. As a result, the transition happened incrementally, first allowing the public a peek at new colors and fonts.

After deliberation, the IASF board agreed to the rebranding and avoided pre-walk confusion by electing to announce it April 30, at their largest fundraiser.

In front of that community, under the rain-soaked roof, York and Evansville Mayor Lloyd Winnecke pulled the black cloth away from the board that introduced the new logo, the new name, and the future of Autism Evansville.

Much like The Literacy Center, Autism Evansville continues to work with EDG.

“Bryan and his committee have just stood by us after the announcement. They have been involved in the design of the brochures, the letterhead, the business cards, and the billboard,” says York. “They just keep giving.”