Working in the competitive industry of commercial real estate, Jack Rogers was looking for a way to stand out. While others would take the opportunity to simply revamp their logo or webpage in hopes of turning a few heads, Rogers, the owner of Jack Rogers Realtor, Inc., went a few steps further.

The Bosse High School and Indiana University alumnus noticed a 1985 “757” Camaro for sale on eBay. The record-holding racecar, which was previously owned by GM engineer Tom Doll and crewed by Jim Fox and Steven Christophersen, would be Rogers’ way of emerging from the crowd.

“In about 1995, I became acutely aware of how many commercial realtors there are today,” says Rogers, who at 72 continues to pilot his racecar at parts of the legendary Bonneville Salt Flats known as the Bonneville Speedway in Northwestern Utah, in other parts of the country, and internationally. “I started thinking about how to distinguish myself from some of the others, so eventually, I hit upon the idea that some of the same skills you need in the real estate business are the same you need in the racing business. I’m not the first person to do this — Joe Gibbs, who coached the Washington Redskins, had his own team in NASCAR. In my case, I had to devise a way to keep my name in front of the public.”

And Jack Rogers’ racing team has done just that for the Evansville native. The “757” Camaro broke its first world land speed record of 225.366 mph in Utah with Rogers as the owner and driver (the car’s previous owners hold five land speed records with the vehicle). Today, Jack Rogers’ team holds nine land speed records at Bonneville and has been featured in local newspapers and national magazines. Rogers describes racing at Bonneville “like racing on the moon. It’s so flat that you can see the curvature of the Earth.” 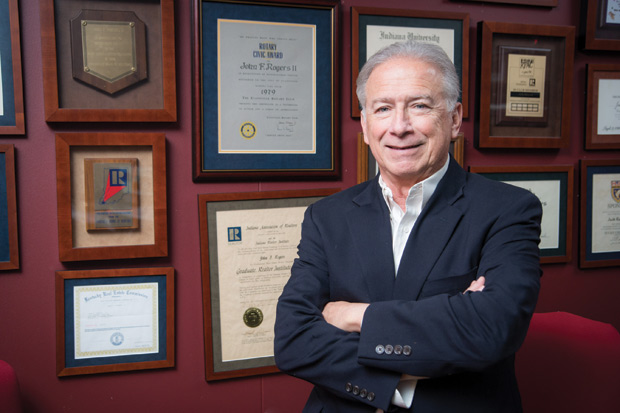 ▲ Above, Jack Rogers, owner of Jack Rogers Realtor, Inc., stands against a wall of accomplishments in his office at 400 E. Sycamore St. To keep the name of his commercial real estate company out in front for the public, Rogers created his alter ego of a racecar driver for Jack Rogers Realtor, Inc. Rogers’ extracurricular activities have earned him the place in magazine features such as one titled “The 200 Club” in Camaro Performers Magazine. 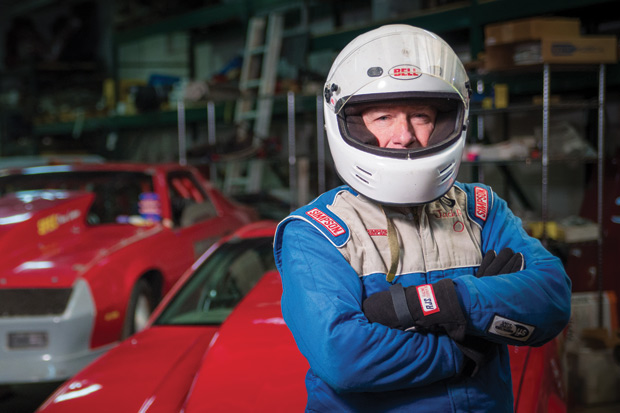 “A lot of the work that this company does is visible,” he says. “That’s the work we do for our own account, but there’s that portion of the work that is done for other people and our name usually never sees the light of day and that’s by design … A lot of things we have worked on have a confidentiality agreement and as a result of that, it is very difficult for us to tell people about what we do. That’s why we formed an entity that promoted our name in the racing business.”

Rogers’ road racing cars compete at La Carerra Panamericana in Mexico, at Pikes Peak in Colorado Springs, Colorado, and at Targa Newfoundland in Canada, an event that Jack recently won. Rogers, who shares videos of his past races, can recall the speed of the car at any moment of the event by the sound of the engine. When asked about the danger aspect of the sport, Rogers replies nonchalantly while watching a replay of the race in Mexico, “It can be, it can be. Most of these roads have guardrails and some of them don’t … I have been through Vietnam. After that, nothing is terrifying.”

Cars always have been of interest to Rogers, who in the racing world is considered a “gentleman driver” with his primary source of income unrelated to professional driving. Rogers says none of the events he enters have prize money associated with them. He dismisses the idea of defining the motor vehicles as his passion. “It is a part of a business plan,” he reaffirms. “It is something that is enjoyable and a lot of work. I’ve always been interested in people who did well racing cars.”

Before leaving Indiana University, Rogers worked at the Indiana Daily Student. On Nov. 22, 1963, the day that President John F. Kennedy was shot, he was in Ernie Pyle Hall gathered around a Teletype when it stopped and rang 12 times, which signifies the death of a president. “The whole room was in shock — almost everyone was crying. I will never forget the feeling of desolation and grief,” recalls Rogers.

Rogers’ career first began with Goodyear Tire and Rubber Co. in Akron, Ohio, and he later took a job with Boeing in Seattle. In 1968, he was drafted into the U.S. Army and spent a year in Vietnam after basic training at Fort Lewis near Tacoma, Washington. Rogers was injured in combat and received a Purple Heart and a Bronze Star. He later returned home to Evansville where he spent a “nonproductive year doing nothing” until his father John persuaded him to join the real estate business. Rogers’ family history also has ties to the original Roca Bar in Evansville, which was a creation of his father and Earl Carter in 1943. Together, the first two initials of their last names make Roca.

Rogers worked in residential real estate for four years with Chick Shively until he started developing a real interest in the commercial side of the business. Emge Realty (now F.C. Tucker Emge Realtors), which was founded in 1946 by Norman Emge, asked Rogers to do some work in the commercial department. In 1978, Rogers joined with Greg Kempf, and together, the two made headlines as they developed Downtown Evansville and the current Fifth Third Building.

“Greg was probably the best influence on me that I have ever had,” says Rogers. “I have had a lot of great partners, but he was the guy who has influenced me the most.”

The pair worked together for five years until Rogers began operating his own real estate agency of Jack Rogers Realtor, Inc. Also during that time, Rogers married his wife Nona in 1979, which he says, “I couldn’t have done any of this without her.” The two have one son John who is involved in management at Tri-State Athletic Club and does real estate work for his father. John graduated with a degree in accounting from the University of Evansville and currently is pursuing a master’s in business administration from Indiana University. 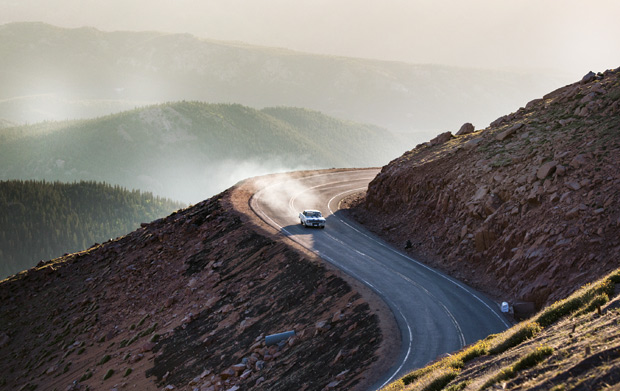 ▲ At an elevation of more than 12,000 feet, Jack Rogers seemed to have nerves of steel racing around the left-hand corner at Devil’s Playground during practice for the Pikes Peak International Hill Climb in Colorado Springs, Colorado. Rogers was driving a white 1965 Ford Falcon. He describes racing in the mountains as being balanced “on the accelerator, on the brake, on the accelerator, on the brake. The idea is to transfer weight as easily as you can so you can go as fast as you can.” Below, Rogers finishes the 2013 Pikes Peak International Hill Climb while driving the Shelby Mustang GT 350. 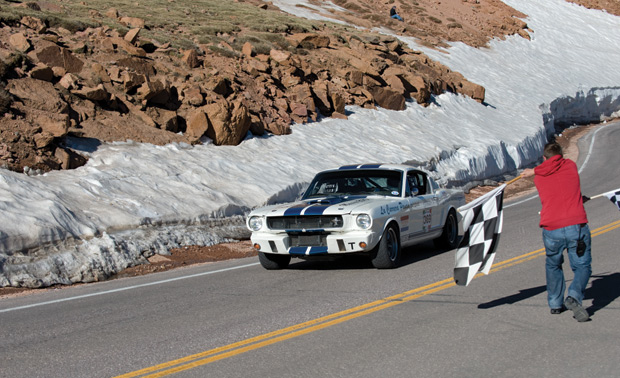 Today, Rogers continues to make significant impacts in the commercial real estate business as he is redeveloping the former Sterling Brewery site, located near the Fulton Avenue – Lloyd Expressway intersection. The facility once housed one of the most dominant brewers in Evansville. The brewery went through several owners before closing in 1997, the same year Rogers purchased the site. The four-story, 100,000-square-foot building project called Sterling Square will transform into condominiums on the top floor and the other two floors will be rebuilt into offices over the next year.

“In 1997 when we purchased the site, it looked like a strategic piece of real estate, sitting at a major intersection,” says Rogers. But because of road construction on Fulton and the Lloyd Expressway interchange, his plans were delayed.

“It took a long time to evolve,” says Rogers. “It wouldn’t have been appropriate for us to take the project forward until everything was in place with the roads. We are now in the process of changing the property from an industrial use into a commercial development.”

Jack Rogers Realtor, Inc., located at 400 E. Sycamore St., recently was involved in completing the expansion of Berry Plastics facility at the airport from 600,000 square feet to more than 1 million square feet. There are several properties on the East Side of Evansville and near Newburgh, Indiana’s Walmart that Rogers is working with prospects for the future of building on the sites.

“Evansville has been a really great place and that’s the reason I have never relocated,” says Rogers. “Some of the people I have met here are people who are at the top of their professions, and in most cases, they could be at the top in any city they choose to live in and they could make a lot more money in other places, but the fact that they stay here is the same reason I am here. I have a lot of rich history with the people here. The whole experience has been very enjoyable.

“That’s the thing that keeps you really going — being able to see these things that you’re involved with come to life.”