When Harold and Carolyn Nix opened Western Ribeye in 1975 at 1401 N. Boeke Road, the menu offered only small, medium, or large rib-eye steaks; baked potatoes; and a salad bar — only the second offered in the city of Evansville.

“In 1975, that was enough to be a good steakhouse,” says David Nix, who now owns the restaurant along with his brother Dan after taking over from their parents. “One of the things we’ve seen now is you really have to have something for almost everybody.”

Today, 42 years later, the restaurant still is owned and operated by the Nixes in the same location, and has expanded to offer everything from the mainstay, 52-item salad bar and steaks to a wide array of seafood options, chicken dishes, and ribs — one of the restaurant’s hidden gems according to David. In 1995, the restaurant changed its name from Western Ribeye to Western Ribeye & Ribs.

“That was the commitment we made to that,” says Dan. “We actually added that into our name.”

The brothers attribute the success and longevity of the family restaurant to having quality products, friendly service, and a stellar flavor profile on all of the dishes. All steaks, burgers, and beef options are seasoned using a secret family blend of spices.

“It’s not something you buy in a bottle,” says David. “It is made to our specifications.” 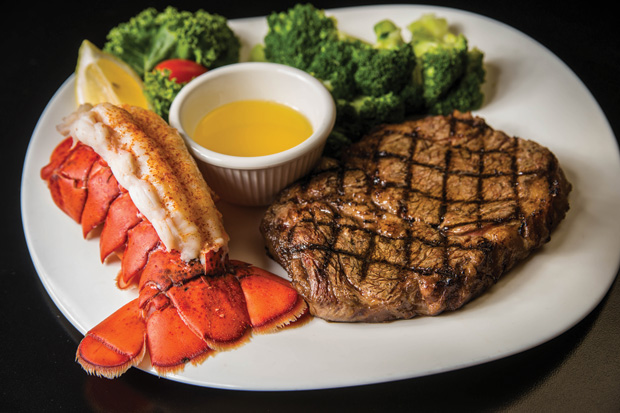 ▲ Where’s the Beef? The Nix family opened Western Ribeye & Ribs in 1975. Today, brothers David and Dan Nix own and operate the steakhouse and still serve up the original rib-eye steak, above. Honoring history is important to the brothers, who have lined the walls of the restaurant with photographs of Evansville dating back to the late 1800s.

Another aspect of the business that sets Western Ribeye & Ribs apart from other restaurants in the Nixes’ eyes is the restaurant’s ability to serve large groups. It’s not uncommon to see groups of up to 20 people at the steakhouse, from family gatherings and parties to business lunches and training sessions.

“We are able to have banquets, parties, and events like that,” says Dan. “Some places they’re not really set up that way, or they don’t really want to be.”

“Most restaurants don’t even want to, because it takes too long,” says David. “It’s too hard to wait on. You can’t turn the table around fast enough.” 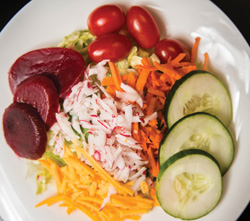 Other specialties found at Western Ribeye & Ribs are the prime rib and 20 oz. rib-eye steak. David says many restaurants have moved away from serving prime rib because of the long process. At Western Ribeye & Ribs, preparing prime rib is a five-hour, time-consuming, and costly process. A special blend of seasonings is rubbed on. It is then slow cooked for four hours followed by an additional hour for the meat to rest before serving.

“Most people who order it do finish it, surprisingly,” says David. “If I ordered it, I probably would be having a little bit of steak and egg for breakfast the next day.”

Outside of beef, the marinated chicken, salad bar, and seafood section, including jumbo and fried shrimp, lobster, and tilapia, all are extremely popular at the restaurant. There is a couple who visits every Friday just to have the salmon.

Perhaps the most unique aspect to Western Ribeye & Ribs, however, is the Nixes themselves.

“I think that’s been our success, knowing each other’s strong points and relying on that person to go with that stuff,” says Dan.

“Especially when Dad still was in the business, when we were addressing a problem, we came at it from three different angles,” says David. “But once we decided what we were going to do, we all went the same way. There is no win or lose. It’s what is the best thing to do.” 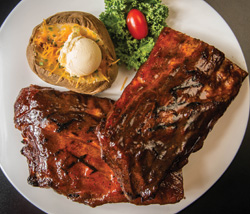 Western Ribeye & Ribs isn’t the only restaurant venture for the Nix family. In fact, it’s just one in a long list of the family’s establishments.

Harold got his start in the restaurant world in Fort Lauderdale, Florida, where he owned and operated a little carryout chicken place. The first establishment for the family in Evansville was Bockelman’s Restaurant, purchased in 1970 on the West Side and which the Nixes sold in 1995. Western Ribeye followed in 1975.

In 1990, the family opened Jacob’s Pub in the North Park Shopping Complex. They owned
the bar and restaurant until October 2007 when it was sold. Four months later, the brothers purchased the Pizza King restaurants with locations on the East Side, West Side, and Newburgh, Indiana.

Walk into Western Ribeye & Ribs today, and customers can see the Nixes’ commitment to community displayed on the walls. Pictures of Evansville dating back to the late 1800s cover the walls of every room in the restaurant. Upon entering, visitors are greeted by a 19-foot-long mural of Evansville painted by the local artist Judith Powers (featured in “Artistic Freedom” in the May/June 2016 Evansville Living issue) based on photographs from the early 20th century.

“We’ve been in the restaurant business for a long time and in a lot of different areas,” says Dan.

“Between Bockelman’s, Jacob’s Pub, Western Ribeye & Ribs, and Pizza King there are few people, I believe, in the city of Evansville who at one time or another our family hasn’t fed in the course of the last 47 years,” says David. 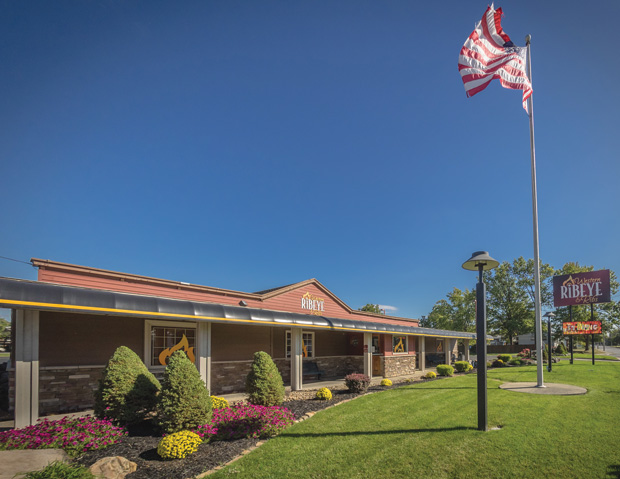