The Sound of Christmas

After the Thanksgiving feast is cleared away, telltale signs appear proving it’s beginning to look a lot like Christmas.

“This is to me, and I think to many people, the true, traditional way to kick off the holiday season,” says Alfred Savia, Evansville Philharmonic Orchestra music director. “Often people say now it really feels like Christmas time.”

The key for these concerts is keeping the tradition in a new, exciting way. Many of the performances keep the same basic format year to year. It’s the arrangements, song choices, and guest artists that keep the concerts fresh. This year, Peppermint Pops, Dec. 2 and 3, and the Bunny Bread Candy Cane Express, Dec. 2, will feature several new arrangements — “Jingle Bells” based on Andy Williams’ Christmas special, David Foster’s “It’s Beginning To Look A Lot Like Christmas” from Michael Bublé’s Christmas album, Nat King Cole’s “The Christmas Song,” Josh Groban’s “Thankful,” and Schubert’s “Ave Maria.”

While Peppermint Pops has been an Evansville Philharmonic Orchestra tradition for about 35 years, the Bunny Bread Candy Cane Express, underwritten by Lewis Bakeries, is in its fifth year. The show gives younger children the opportunity to enjoy holiday music in a shorter, lighter format.

LillyBea Ireland, a local eighth grader who toured with the national production of “Annie,” will host this year’s Bunny Bread Candy Cane Express along with guest performer Tim King, who also will perform in Peppermint Pops.

Aside from the two philharmonic concerts, the orchestra also provides live accompaniment for the Evansville Ballet’s production of Tchaikovsky’s “The Nutcracker,” Dec. 9 and 10.

“It’s the only chance people in the area have to see ‘The Nutcracker’ and hear a live orchestra play Tchaikovsky’s score,” says Savia. “There’s nothing to replace live music in ballet.”

Of all of the holiday concerts, however, Savia considers the two performances of Handel’s “Messiah” by candlelight, one Dec. 15 at Trinity United Methodist Church and one Dec. 16 at St. Joseph Catholic Church in Jasper, Indiana, to be the shows he is most attached to.

“Something I brought to the philharmonic when I came was the idea of doing a ‘Messiah’ with not a gargantuan orchestra, but a small chamber orchestra,” he says. “The way it really was conceived by Handel.”

With each of the four traditional holiday shows, becoming repetitive isn’t a worry. The holiday concerts are some of the Evansville Philharmonic Orchestra’s most popular and well-attended productions.

“One thing people generally say is, ‘That is the best one ever,’” says Savia. ‘“How are you going to top it?’ That’s my challenge every year, to make sure that happens.”

For more information on the Evansville Philharmonic Orchestra, call 812-425-5050 or visit evansvillephilharmonic.org. 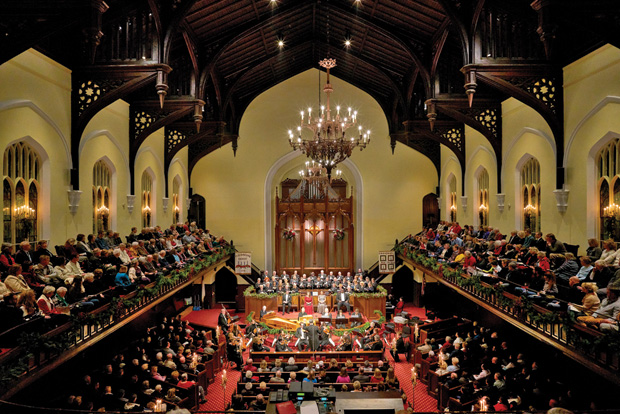