Most artists have their own style, whether it be abstract, minimalism, impressionism or others. For photographic-based designer Jenna Citrus, her style is non-style.

“As I kept developing as an artist, one thing people kept saying is, ‘Oh, as you get older and more developed as an artist, your style will emerge,’” she says. “For me, it just hasn’t, almost on purpose. I just love trying new things and incorporating different elements.”

Citrus was 14 years old when she first entered the art world. Every night before bed, she painted in her notebooks and felt a compulsion to keep creating. She received her first DSLR camera in 2009 and has been shooting and creating ever since.

She graduated from the University of Southern Indiana with a degree in graphic design in 2015 and left Evansville in 2017 to attend graduate school at the University of Cincinnati. She came back to the area two years ago after leaving Georgetown, Ohio, when her partner Bryan Gish began working for her full-time for a year. They currently reside in Henderson, Kentucky.

Lately, she’s gotten into video and music video production, including creating a stop-motion video. Her goal this year is to hire someone to help her write her own song. She’s also published two full poetry books, a photography book, a guided meditation audio book, and numerous journals with printed artworks on them.

But at the end of the day, it’s photography that Citrus always comes back to.

She says the camera is always involved at some point with whatever artwork she is creating. 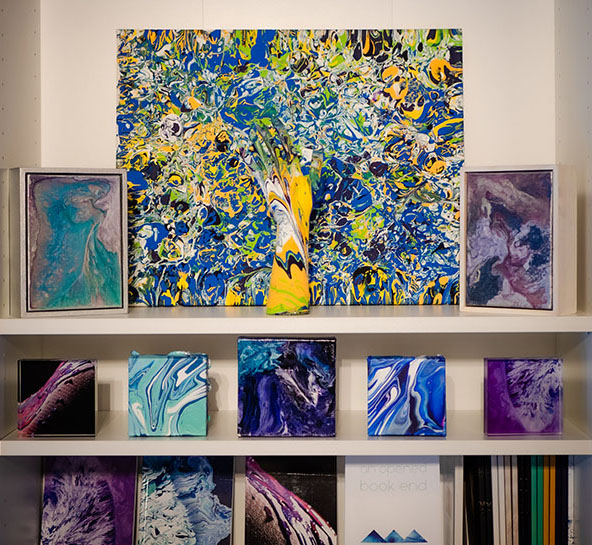 “I love taking pictures of paintings that are wet, so they’re a work in progress, and from there I’ll take them into the computer and work with them,” she says. “I did a series called the hand painted series, where I worked with other people and I painted their hands and then it dripped down onto canvases, and I was able to manipulate that digitally.”

Recently, Citrus has looked for ways to reinvent herself, specifically when it comes to designing album and book cover art. Some of the books she’s created cover art for include “A Pursuit Of Summits” and “Gang of Four,” written by local authors Johnnie Williams and Terry Seaton. She enjoys finding different ways to integrate photography and graphic design.

Ultimately, Citrus wants people to understand the happiness and positivity behind her art.

“I’ve spent enough time in the sadness that I really just want to evoke positive, happy emotions with people and try to spread the happiness,” she says.