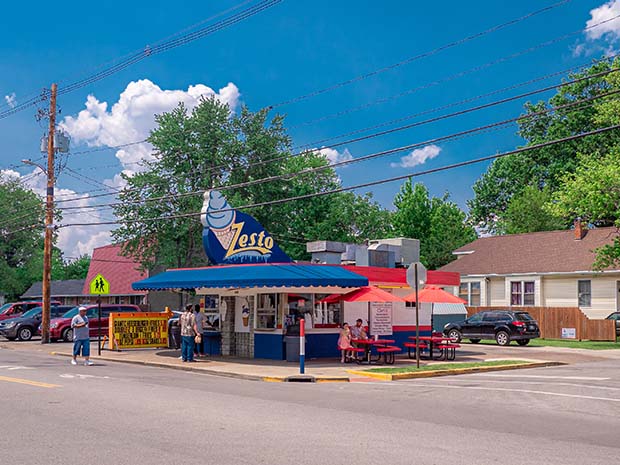 It’s been a habitual sight during Evansville’s scorching summers for the past half century: crowds of families lined up on Riverside Drive awaiting the service windows of Zesto to open, ready to bite into a classic burger, hearty chili dog, or soft serve ice cream cone.

For many people, Zesto brings back memories from a simpler time devoid of slick restaurants and national chains. For Dan and Todd Hardesty, Zesto means more than just a reminder of yesteryear’s fast-food era; it means family.

Opened in 1952, Zesto on Riverside Drive is celebrating 70 years of filling hungry patrons with sizzling burgers and soft serve ice cream. Now, a not-so-new face will greet loyal customers of this neighborhood favorite.

After more than 30 years of ownership, Dan Hardesty is retiring from the business he has worked at since he was 11 years old. On Feb. 1, Dan officially sold Zesto to his brother Todd and his wife Peggy, passing on one of Evansville’s most iconic properties and keeping afloat the restaurant that has been in the Hardesty family since 1971.

“I just thought it would be cool to keep it in the family,” says Todd, who is retiring after a 20-year career as a sign fabricator to take up ownership of Zesto. “We have a personal touch. People get to know you. All the neighbor people tell us they want to get to know us.”

At one time, Zesto on Riverside Drive was part of a larger chain of restaurants scattered throughout the Midwest and southeastern U.S. Frank and Mildred Krug partnered with another couple in the late 1940s to open three Zesto franchises in Evansville on Riverside Drive, Franklin Street, and Boonville Highway. The Riverside and Franklin locations remain open, but with different owners.

The franchises would be short lived, abandoned by 1960 to become privately owned and operated locations. Seizing an opportunity to own what was still a popular ice cream and burger joint, Tom and Pat Hardesty purchased the Riverside location — positioned between the Tepe Park and Glenwood neighborhoods on Evansville’s South Side — in 1971.

The couple kept to Zesto’s 1950s approach, specializing in juicy quarter-pound burgers and ice cream. The soft serve from the trusty Taylor Freezer Corp. machine — Taylor originally franchised the Zesto concept in 1945 and centered it around the Zest-O-Mat frozen custard machines the company sold — that defined the walk-up restaurant. Soon, the Hardestys brought their 11 children on board to help take orders, flip burgers, and pour ice cream.

“We grew up in this business,” Todd says. “We lived just a block away on Ravenswood (Drive). Everybody in the whole family — all 11 of us — worked here.”

Todd recalls stopping by to order a milkshake or Z burger combo — costing a measly $1.99 at the time — when he was young. He worked at Zesto as a teenager, often with one of his siblings or friends who were employed there throughout the years.

“This was back when it was a big deal to share a Coke with a sibling,” he says. “We stayed open until like 3 a.m. back then. We used to stay open until the bars closed.”

The Hardestys entered an ownership partnership in the early 1980s with their son Dan, who managed Zesto until officially buying out his parents in the early 1990s. Dan subsequently became the owner of the Riverside restaurant along with his wife Mary.

After 30 years, Dan decided it was time to retire from the only job he has ever known. He approached his brother in April 2021 about the prospect of purchasing the ice cream and burger stand. Todd and Peggy eventually agreed to purchase Zesto in September, with the deal finalized in February.

“I picked them because I knew they were right for it,” Dan says. “They were the first ones I went to asking if they were interested in buying it.”

Dan certainly had plenty of family members to choose from. Out of the 11 Hardesty siblings, half of them went into the ice cream or food service business. His brother Dave owned a Dairy Queen franchise in Mount Juliet, Tennessee, for about 20 years, and youngest brother Joe recently purchased Big Top, a similar walk-up style ice cream and burger shop on North Fulton Avenue, from their sister Becky Hofmann, who owned the restaurant with her husband Jerry for nearly 33 years. Todd and Peggy also owned a mall Dairy Queen franchise in Tennessee for about three years in the mid-1990s.

Zesto continues to run on family. The Hardestys’ brother-in-law Jim Ward is a manager and has worked at the restaurant since he was 15 years old. Todd and Peggy’s daughter Grace also works part-time at Zesto.

The plan, Peggy says, is to keep Zesto in the family once they too decide to retire.

“It would be nice to keep it in the family and keep the tradition going,” says Peggy, who serves as bookkeeper while Todd runs the day-to-day operations. The setup mimics the roles Dan shared with Mary.

“Dan’s been impeccable in being patient and guiding us through this whole thing,” she adds. “Without Dan and Mary, I don’t know if we ever could have done this.”

Despite the new ownership, don’t expect any changes on the menu. Todd says apart from repainting the service windows and installing LED strips around the roof to revive the retro appearance, customers can count on the same Double Z Burger Special and twinkle kote ice cream (a vanilla cone rolled in a combination of peanuts and sprinkles) they’ve been ordering since they were children.

“Everybody knows when they come up here what’s here because it’s been so long,” he says. “We’re not changing anything.”

It’s a new chapter for the small restaurant that has survived a furious wave of fast food giants and corporatized industry, but Zesto is sticking to what it does best: easy, good food for a community that supports them, and vice versa.