At the offices of Motivating Systems in Downtown Evansville, it is common to hear the ring of a school bell followed by clapping and cheering. Every time the bell rings, it means Motivating Systems has a new agreement to provide its PBIS Rewards services to a new school.

Officially established as its own company in December 2016, Motivating Systems began as a division of Lieberman Technologies that developed software schools use to manage their Positive Behavioral Interventions and Supports (PBIS) initiatives. The PBIS framework has been around for decades, and over the last several years K-12 schools have been rapidly adopting their PBIS management system.

“You can do PBIS without software to help you, but I don’t think you can do it well,” says Pat Heck, president and CEO of Motivating Systems. “It is very data driven. Without the software component of it, you’re really behind the eight ball.” 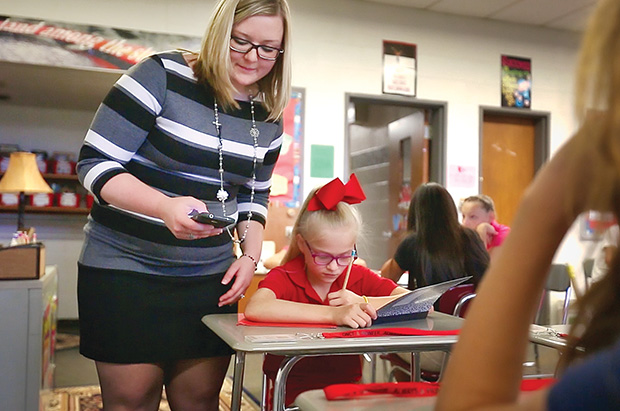 As of January 2019, Motivating Systems has provided PBIS Rewards to more than 1,100 schools in 47 U.S. states and seven countries, including South Korea, Australia, Canada, Saudi Arabia, the Virgin Islands, and Qatar. When Motivating Systems was established, the company had seven employees. Today, they have grown to 23 employees.

“We have a great mix of people who have really good business experience, really good software experience, and a lot of our staff now has an education background,” says Heck. “I think there are 11 of our 23 who either were a teacher, are married to a teacher, or have a parent who is a teacher.”

The core of PBIS Rewards’ function is to make schools a better place for every kid to learn and grow academically, socially, and emotionally. The PBIS framework is based on research that shows in- and out-of-school suspensions do not work. Suspensions do not address the behavioral problems; they only remove the problems from the classroom. Through PBIS, students are rewarded and recognized for doing the right thing, whether that is walking quietly down the hallway, helping a classmate, or being at their desk on time with materials ready when the bell rings. When schools successfully implement PBIS, suspensions drop significantly.

“What most schools call office discipline referrals is the main gauge to how they are measuring the success with their PBIS Rewards program, but there are lots of other data points in our system,” says Andrew Epperson, vice president and chief marketing officer at Motivating Systems. “We have a component to our system that tracks the positive recognition and the discipline referrals, so all of that data is in one spot for the school.”

“There are schools who will see their in-school and out-of-school suspensions drop by 75 percent, and that changes a school entirely,” says Heck. “The culture of the school is a different place when that happens.”

After launching PBIS Rewards and seeing the success in schools, Motivating Systems (which was still part of Lieberman Technologies at the time) started thinking about issues in its own office — specifically issues with time card compliance. Instead of badgering employees to submit time cards on time, the company decided to reward people through a new program called “PhilBucks,” named for the company’s founder Phil Lieberman. If an employee submitted their time card on time, they were rewarded with PhilBucks.

“I’m not exaggerating that our time card problem almost disappeared instantly,” says Heck. “I had no idea of the impact it would have.”

Around the same time, news outlets picked up stories about schools who had success implementing PBIS Rewards, and businesses would reach out to Motivating Systems asking if they had software to implement in a professional setting.

“We started saying there is a product here,” says Heck. “We said let’s go build a workplace product called Workplace Rewards that embodies some of those same concepts of being positive and recognizing people for doing the right thing.”

“Since it started back in its infancy, we’ve more than doubled the number of schools using PBIS Rewards each year,” says Epperson. “We’re targeting to accelerate that pace because of the success stories our schools are having with using the software. We want to make sure more schools have the opportunity to have that success.”

“When we go to conferences, it is common for our schools to come up to us and give us hugs — that’s how much the schools love what we help them with,” says Heck. “It’s unlike anything I have experienced in most of my business-to-business relationships.” 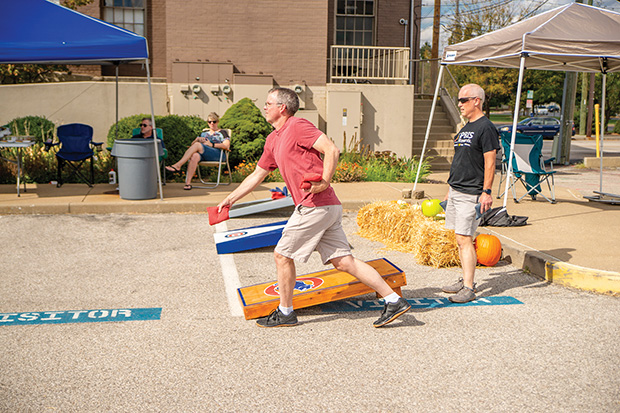 ▲ Workplace Rewards was born from an idea to motivate employees at Lieberman Technologies to turn time cards in on time. Now, the program has expanded to reward employees for company-enriching actions, like participating in a work corn hole tournament.
Share
Facebook
Twitter
Previous articleWork Together
Next articleBob Jones to Retire from Old National Bank