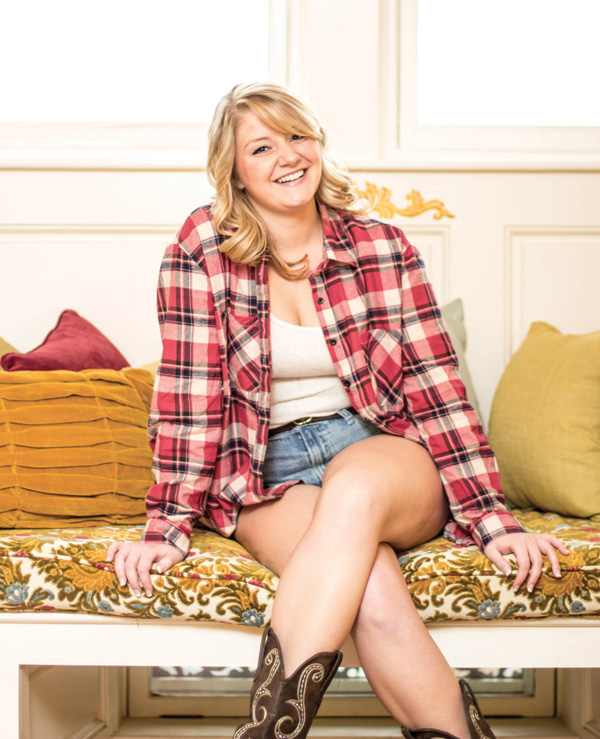 Twenty-year-old Meghan Gallagher’s Facebook page says a lot about the aspiring country singer: she likes to take selfies with her parents and she is a class clown, posing with a goofy, cross-eyed grin in several photos.

A 2012 Reitz Memorial High School graduate, Meghan Gallagher is making her name known in the Nashville country music scene. Meghan returned to her alma mater March 7, with her family, to perform her five songs to the student body for the first time. She got the crowd up on its feet, clapping and swaying, to songs titled “I’ve Got To Believe,” “Ain’t Gonna Give It Up,” “Breakin’ Up Is Going Around,” and “After This.”

“It meant a lot to come back to Memorial to do this,” says Meghan’s dad, Brian Gallagher, also a Memorial graduate. “They’re our family and are credited for helping her get where she is now,”

It all began 10 months ago in early July 2013 when Meghan’s mom, Rita Gallagher, chatted with Brett Holland, drummer in a local band, MaVeety, about her music-loving daughter. He frequented the bank where Rita works, bringing in weekly deposits for his employer. On his next visit, he brought in the CD that his band produced, featuring lead singer Tim Ash. When Ash came in to open an account, Rita recognized him and told him how much her and her daughter loved his album. Weeks went by, and Ash showed an interest in hearing Meghan sing, so after meeting up and singing “The House That Built Me” by Miranda Lambert and “Before He Cheats” by Carrie Underwood, Ash was sold and immediately wanted to “sign this girl.”

“Before I knew it, we were scheduling a photo shoot and producing my EP a few months later in a recording studio in Nashville,” says Meghan, adding that artists like Rascal Flatts, Florida Georgia Line, and Kenny Chesney recorded at the same studio, County Q Productions. Gallagher’s stage name is Meghan Nicole and she is an artist for Muddy Records, in Harrisburg, Ill., co-owned by her manager, Tim Ash. Gallagher’s mom and dad have been very supportive of her potential singing career since she was a young girl, enrolling her in voice classes when she was 9 years old.

“She’s been singing since she was 3 years old. She would sing (music from the movie) ‘Beauty and the Beast’ all the time, it was her favorite,” says Rita, picturing Meghan dancing around in front of the television. Meghan has participated in several singing competitions, including the Indiana State School Music Association Annual State Solo and Ensemble Championships where she’s won the gold award five times (with a perfect score in 2012) and silver once.

When Meghan finished her last song in front of the 713 students in the Memorial High School auditorium, one student stood up and asked her to sing “Light the Fire,” seen as a Memorial tradition, for old-time’s sake. “Light the Fire” is the song performed by the school choir at the end of Mass each week. Meghan then gave an emotional performance. Meghan ended with some advice to her peers: don’t ever give up on your dream, even if it seems unreachable. Look for that one opportunity to make it happen, and go for it, don’t let your fears hold you back.