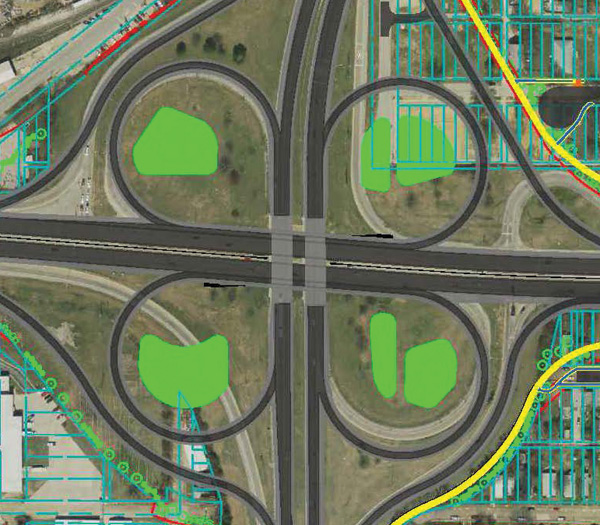 When the new cloverleaf interchange at the Lloyd Expressway and U.S. Highway 41 is complete late next year, it will not only speed up traffic through Evansville’s most congested area, but also make it safer.

According to Indiana Department of Transportation spokesman Will Wingfield, about 122,000 vehicle trips are made each day through the interchange.

This $19.1 million project will eliminate two stoplights from the Lloyd Expressway, increasing traffic capacity. The construction contract was awarded to Ragle, Inc. of Newburgh, Indiana.

“All of the ramps will be free-flow, without any traffic signals,” says Wingfield. “In addition, the project will have a pedestrian bridge (just to the east of an old pedestrian bridge that has been removed since the start of construction) with a multi-use trail connecting with it.”

“When we plan a work zone such as this, we are balancing the speed of traffic with the speed with which the contractors get the work done,” says Wingfield.

“We are trying to balance that effectively. But the early onset of winter has posed some challenges for us.”

New entrance-exit ramps and connector and loop ramps will be added in each corner of the interchange. On U.S. Highway 41, the project will include pavement and bridge rehabilitation.

Evansville leaders, including Mayor Lloyd Winnecke, pushed for the full cloverleaf design. Doing so required INDOT to purchase about 30 parcels in the area.

“It creates much better traffic flow through the heart of the city,” says Winnecke. “INDOT’s plan before they agreed to build the cloverleaf was to build a partial cloverleaf and move those traffic lights to U.S. 41. The last thing we wanted was more traffic lights on 41. So that’s why we fought diligently to remove the lights all together.”

Traffic will be maintained during the project by phasing construction on both U.S. Highway 41 and the Lloyd Expressway. Businesses in the area also will remain open. The project broke ground Oct. 1 and is expected to take about a year to complete. INDOT is encouraging drivers to avoid the area during construction, or to allow additional time to travel through the work zone.