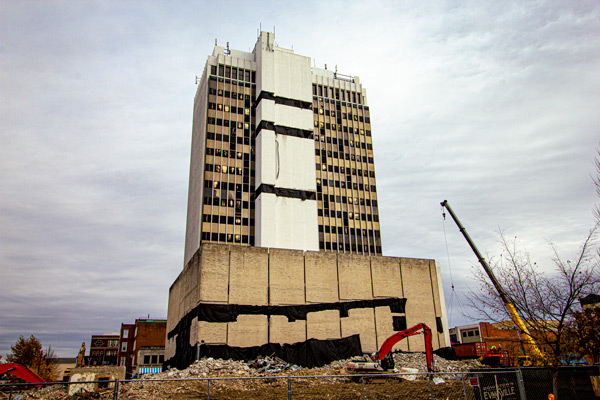 At roughly 7 a.m. this Sunday, Nov. 21, several explosive charges will detonate, and the 18-story tower at 420 Main St. will crumble to the ground, taking with it 50 years of Evansville’s memories.

Built in 1970 as the headquarters for Old National Bank, 420 Main was revered for its towering presence and grandeur of The Petroleum Club, an exclusive supper club on its top two floors. Created in the 1940s to cater to oil industry barons, and originally located in the McCurdy Hotel, the Vendome Hotel, and Citizens Bank building, the club moved into 420 Main in 1970 and became Evansville’s best place to see and be seen. Visiting stars, such as singer Tom Jones and baseball legend Yogi Berra, also stopped by the club, adding to its allure.

In 2004, Old National Bank moved into its current headquarters at the corner of Main Street and Riverside Drive. The Petroleum Club closed its doors two years later, and 420 Main has mostly been vacant since. Several renovation ideas have been floated to rejuvenate the building, the most recent by Carmel, Indiana-based Domo Development, which bought the site in 2019. A post-purchase assessment determined the cost to renovate the building would exceed any revenue it would bring it, and the decision was made to topple 420 Main and the adjacent Sycamore Building for smaller, mixed-use structures and a Downtown park.

After the site was found to be unsalvageable, Indianapolis-based demolition contractor Renascent Inc. began chipping away at the buildings in the 400 block of Main Street. A specialist in removing and repurposing old structures, Renascent used mechanical demolition to take down the Sycamore Building in September while interior demolition was performed on 420 Main. According to Candace Chapman, the executive director of the Downtown Evansville Development Corporation, interior demolition has removed the risk of asbestos being released into the air during Sunday’s implosion, and shipping containers have been set up along Main Street and Northwest Fifth Street to protect neighboring buildings from falling debris. (A study performed by Seismic Surveys and submitted to the U.S. Bureau of Mines found a minimal risk of damage to surrounding buildings, which allowed the implosion plans to proceed.) Following a successful implosion and post-blast site assessment, Renascent will stay onsite to perform cleanup.

This Sunday morning, Controlled Demolition Inc. will take the reins and set the charges to bring down 420 Main. Founded more than 60 years ago in Maryland by the Loizeaux family, CDI has worked on six continents and performed the controlled explosive demolition of more than 8,000 structures, including Market Square Arena (Indianapolis, July 2001); RCA Dome (Indianapolis, December 2008); 14 towers in Las Vegas; and Trump Plaza casino (Atlantic City, New Jersey, February 2021). Notably, CDI’s explosives specialists were called upon to demolish the Alfred P. Murrah Federal Building damaged in 1995’s Oklahoma City bombing, and this summer, the company performed emergency demolition on the Champlain Towers South condominium after it partially collapsed in the Miami suburb of Surfside, Florida.

According to Renascent project division manager Rick Hall, Renascent, CDI, site general contractor Barton Malow, and local government and public safety officials will meet at 4 a.m. Sunday to determine the feasibility of the implosion as scheduled. Should the current plan be given the final green light, 420 Main is slated to fall three hours later.

Leading up to Sunday’s demolition of 420 Main, Fifth Street between Sycamore and Locust streets has been closed to vehicular traffic; those barriers will be extended north to Vine Street and south to Walnut Street at 5 a.m. Sunday morning. Main Street is also closed between Fourth and Fifth streets.

The area from Vine to Locust streets and Third to Sixth streets has been designated as an exclusion zone, which represents an area of potentially dangerous decibel overpressure. No one in the exclusion zone is allowed outdoors during the blast. Spectators on the ground must remain outside the exclusion zone, which will be enforced by police patrols on the ground until 6:50 a.m. and via drone from 6:50 a.m. to the time of implosion. The heaviest of the implosion’s resulting dust is expected to dissipate within a few minutes, with the timeline for the remaining dust settlement dependent on the day’s wind patterns.

The City of Evansville has encouraged those curious to see the implosion to watch a live stream of the event from the safety of their homes.