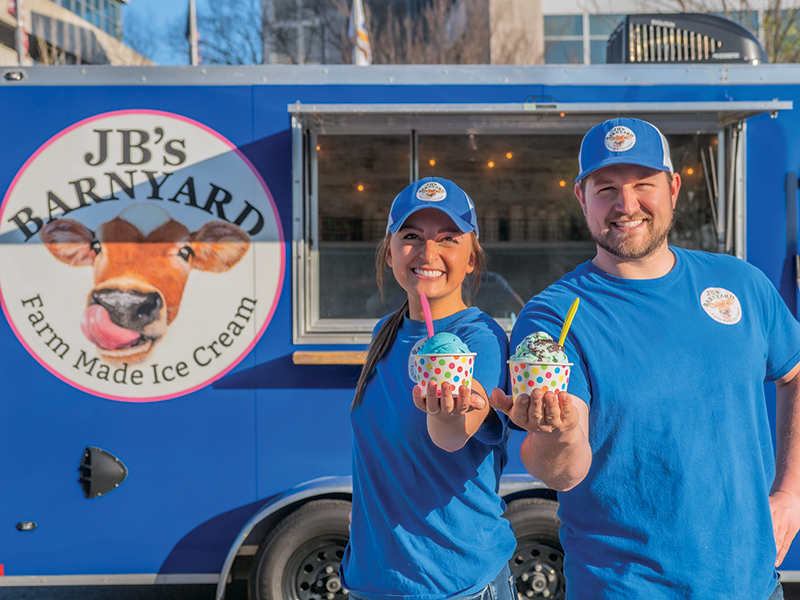 The bold blue trailer, easily recognizable to Evansville residents as the JB’s Barnyard ice cream truck, had been parked Downtown for only 20 minutes when a line began to form. While owners Briley and Jared Simpkins were visiting for an interview with Evansville Living, the young couple still served customers with the same contagious positivity that’s become a benchmark of their brand.

“We always knew for years that we wanted to do some sort of business; we just didn’t know what,” says Briley. “But what better way to bring smiles to Evansville than with ice cream?”

Both Tri-State natives — Briley hails from Newburgh, Indiana, and Jared is from Evansville — the couple didn’t cross paths until college when they were both students at Western Kentucky University in Bowling Green. Graduating in 2016, Jared received a degree in construction engineering, while Briley holds a bachelor’s degree in agriculture with an emphasis in agronomy, the study of field crops.

“When we met in college, what struck up the conversation was, ‘Oh, wait, you’re from Evansville, so am I.’ And then we both had aspirations to move away after college,” says Briley. “Once we moved back (to Evansville), we knew it was our place to stay for sure.”

An estimator at Sterling Industrial LLC and a supervisor at Mead Johnson respectively, Jared and Briley got married in 2019. As the couple were stuck at home during the COVID-19 pandemic, their entrepreneurial desires came to the forefront.

In the midst of self-help books and inspirational readings, Briley found herself reflecting on her career path, which led her back to one of her favorite jobs.

Working at Chaney’s Dairy Barn while attending WKU, Briley milked cows, fed calves, maintained the farm, and worked in the onsite ice cream shop. As the idea for JB’s slowly developed, a vision the Simpkins like to say was truly given to them by God, collaborating with Chaney’s became a no-brainer.

In October 2020, they visited the farm and struck a deal with the owners, Carl and Debra Chaney. The Simpkins now make monthly trips to the dairy farm to stock up on ice cream they store in a local commissary freezer.

“The milk they get from their cows goes into this ice cream,” says Briley. “They have Jersey cows on the farm, which are the brown cows. But what’s super unique about Jersey cows is that they have a much higher percentage of butter fat in their milk, so that’s why we have the creamiest ice cream you can get on the market.”

JB’s trailer cooler can carry 16 flavors at a time, each as irresistible as the next. Their best seller is the Wow Now Brownie Cow made of chocolate ice cream, chocolate flakes, chocolate swirl, and brownies. The cheesecake flavors, such as strawberry or blueberry, are also popular.

This summer, dairy-free options also will make a debut with a mango sorbet. All ice cream is sold as a single or double scoop in a cup or a waffle cone. The Simpkins also make Moo Shakes, their version of a milkshake, out of every flavor, and they seasonally have Mini Moos, a warm chocolate chip cookie served with ice cream on top.

They may not make the ice cream themselves, but Jared and Briley still put their own signature on every scoop.

“Trying all of the flavors and making different combinations honestly is really fun,” says Jared. “My favorite is the old fashioned, so it’s the bourbon crunch with the wild cherry. We’ll do the chocolate monkey, which is the Wow Now Brownie Cow with our banana ice cream. We try to put our own little twist to it.”

“It’s really neat just to be able to bring the ice cream from (Chaney’s) to Evansville and truly be able to say this is made on a dairy farm,” adds Briley.

Bobbie is shown on decals printed by Slade Print across the Simpkins’ trailer, which Jared renovated. Originally a cargo trailer with a bare plywood interior, Jared redesigned the space for a clean, farmhouse chic design and functionality. He also cut the service window and installed the foldable, wooden counter.

“I’ve worked in construction a long time, so you learn a lot of skills along the way that help you in your future path,” he says.

A year since they served their first scoop, the couple has built a following in the community.

Both Jared and Briley agree that meeting and talking to new people has been their favorite part of the journey so far. From posting up in neighborhoods for an afternoon to signing up for major events such as the Evansville Food Truck Festival, they’re ready to make more friends and serve up even more of residents’ favorite flavors.

“We’ve got pretty big aspirations for the company,” says Briley. “We’re not necessarily revealing what our plan is, but we always like to say we’re a little ice cream trailer with big dreams. Our journey is going to be long, but we are so confident in the support we’ve already had from the community.”