A Valley of Opportunity.
Feel the Pride Come Alive.
Go Forward with Evansville.
Gateway to the South.
e is for everyone.


Over the course of Evansville’s 208 years as a city, we’ve marketed ourselves through many phrases and slogans. Each has its own story — some are tied to specific business or tourism campaigns, while others were a part of efforts to share Evansville with the country and the world.

Looking back through local archives, we pulled seven of Evansville’s slogans, some successful and endearing to our history and others that couldn’t get a foothold.

As our city continues through a period of tremendous growth, while also coming together during the recent novel coronavirus pandemic, these phrases remind us how Evansville can and has united to move forward.

It’s prevailed for over a century and can still be found in various places throughout our city. Former Evansville Mayor Benjamin Bosse’s iconic phrase is known well by city residents and historians.

Though it appears in countless newsletters, newspapers, and magazines of the time, the slogan was never officially adopted by the city — its creation stems from the building of an Evansville landmark.

“Its origin was from the opening of Bosse Field in 1915,” says Kelley Coures, director of the department of metropolitan development. “It was his personal slogan but was not an official city slogan.” 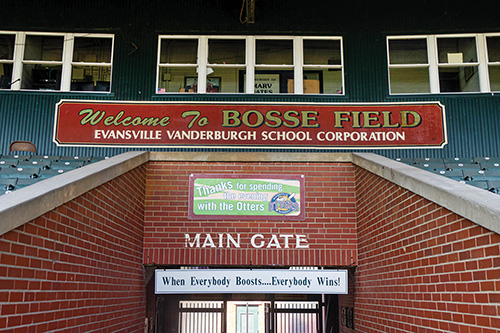 An article from the Courier at the time, provided by Coures, stated: “‘When Everybody Boosts, Everybody Wins.’ — Benjamin Bosse This is the motto Mayor Bosse wrote at the invitation of the Central league management to fill the space above the scoreboard at Bosse Field.”

He may have written it to go upon a scoreboard, but Bosse took ownership of the quote and used it at every opportunity to call on others in Evansville to “boost” their city. The quote and Bosse’s name were interchangeable in a way — you couldn’t read about Bosse without seeing “When Everybody Boosts, Everybody Wins” written before or after his name.

In the October 1921 edition of the “National Engineer,” an account of the Convention of National Association of Stationary Engineers held in Evansville in September 1921 includes Bosse’s introduction to the crowd, where association Chairman Chas Streithof called the phrase “the best and truest motto that has ever been written.”

Bosse’s impact on our city is constantly summed up simply by saying “When Everybody Boosts, Everybody Wins.” Time and again, it is used as a reflection of the growth and prosperity Evansville experienced under the former mayor’s guidance — one of the largest periods of growth in our city. It’s also harkened to by civic and business leaders to this day, using it as a rally cry for Evansville to step up.

Bosse was a champion of Evansville — the city’s grandest cheerleader during his lifetime. His famous quote was made in an effort to have residents and business leaders follow Bosse’s lead, to be a “booster” for all things Evansville. So in a way, the former mayor’s hope for the quote survives still today.

When we all come together to work for one another and for our city as a whole, we all come out as winners in the end.

Air Cross Roads of America and Gateway to the South

“In the period from 1928 to 1935, the city was touting itself as the ‘Air Cross Roads of America,’” explains Stan Schmitt, Vanderburgh County historian.

This phrase came about, most likely, as Evansville turned a corner in its transportation history. Beginning with the announcement of a new municipal airport in 1928, the city seemed to be looking for ways to get the word out about Evansville in a brand-new way.

The slogan could have been the reason for the production of a series of postcards featuring some of Evansville’s landmarks. Each postcard bore the slogan “Air Cross Roads of America” along the bottom.

“Postcards were a popular way to show off and advertise your city at the time,” says Schmitt.

In the early 20th century, up until the 1930s, postcards in the U.S. were experiencing a golden age. According to an article written by Fred Bassett, senior librarian, manuscripts and special collections at the New York State Library, “Postcards were produced for every occasion. Whenever America paraded or celebrated anything, the postcard photographer was there.” 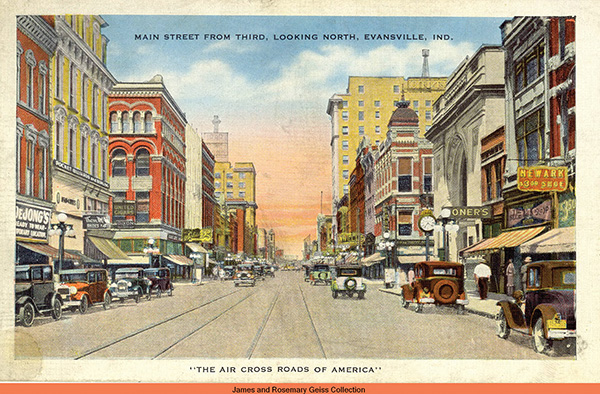 Given the fact postcards reflected so much of American life during the early 1900s, it was natural for cities to use them in early branding and marketing efforts. As Evansville celebrated the completion of the bridge over the Ohio River with neighbors in Henderson, Kentucky, in 1932, another set of postcards appeared, touting Evansville as a “Gateway to the South.”

As it was only one of three spots at the time that allowed motorists into Kentucky without using a ferry, the bridge truly made our River City a gateway.

I Will … Go Forward with Evansville and the Valley of Opportunity

Wartime in the 1940s brought a tremendous jump in population and business to Evansville. The city was equipped for manufacturing and was able to switch gears to help build LSTs, Thunderbolt air fighters, bullets, and more.

But after the conclusion of World War II, the growth tapered then fell hard. By 1955, things were not boosting around Evansville. Major manufacturers Chrysler, Servel, and International Harvester had shuttered their doors and left town quickly — enough to cause Evansville’s collective head to spin.

The economic situation was not healthy. Evansville was in need of help.

On Dec. 31, 1955, mayor-elect R. Vance Hartke ran a full-page piece in the Evansville Courier. At the top, bold letters proclaimed “On the Threshold of Evansville’s Greatest Era of Expansion…” 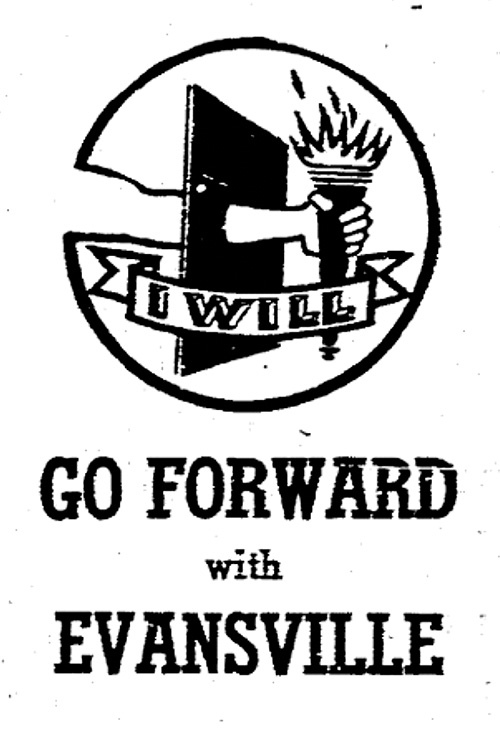 In this advertisement, Hartke used the phrase “I Will … Go Forward with Evansville” and indicated his administration would be focused on reviving the city’s industrial and commercial economy, supporting local businesses, while also starting programs “that will make Evansville an even more inviting place to work and live.”

Businesses all throughout the city latched onto the slogan as Evansville worked to pull itself up by its bootstraps. Ads from multiple businesses around town carried the logo tied to Hartke’s phrase. And Benjamin Bosse’s iconic “When Everybody Boosts, Everybody Wins” came back with force as a large group of “public spirited firms and individuals” showed support for Hartke’s plan.

It was a lead up to the now well-known Fantus Report, released in 1958. Commissioned by the newly formed Evansville’s Future, Inc. and paid for by city residents, this report identified priority recommendations for leaders of the city to address in order to move it forward. Amongst the suggestions were developing sites to attract new industry, attract tourists to the city, and creating a “new Evansville through urban renewal and sound zoning practices.”

Evansville’s Future, Inc. didn’t bat an eye — they immediately dove in to address the problems the Fantus report raised, looking to work on Evansville’s image and self-promotion, says Coures.

“It’s how we got Alcoa, multiple plastic companies, and a state university,” he says.

Along with “I Will…,” another slogan was presented in the mid 1960s by a new image committee formed within Evansville’s Future, Inc. “A Valley of Opportunity” was adopted out of several suggestions, and the group hoped it would not only entice new businesses, but encourage residents to take pride in their city.

By the end of the 1980s, Evansville was looking for another jolt to its image. A new decade was around the corner. The Evansville airport had just hired Keller-Crescent Co., Indiana’s largest advertising agency located in Evansville, to help with their marketing efforts. The city was trying to once again find its identity.

“It was an exciting time,” says Appler, who headed up the airport’s “Say Yes” campaign, an effort to bring a new terminal to Dress Regional. “I think the [new airport project] was the beginning of people realizing Evansville’s potential. I think it was the first step Evansville did take in spiffing itself up.”

While Appler and the airport board worked to educate city residents and Indianapolis lawmakers on the Evansville airport’s needs, the city chamber was crafting their own campaign — “Feel the Pride Come Alive.”

This slogan’s goal was to tackle Evansville’s perceived “communitywide inferiority complex,” officials said at the time.

“A chamber survey found that Evansville residents thought the community either had no image or a negative image,” an Evansville Courier article said in July 1989.

“Feel the Pride Come Alive” included another round of bumper stickers, newspaper advertising, billboards, and jingles that aired on television and radio. 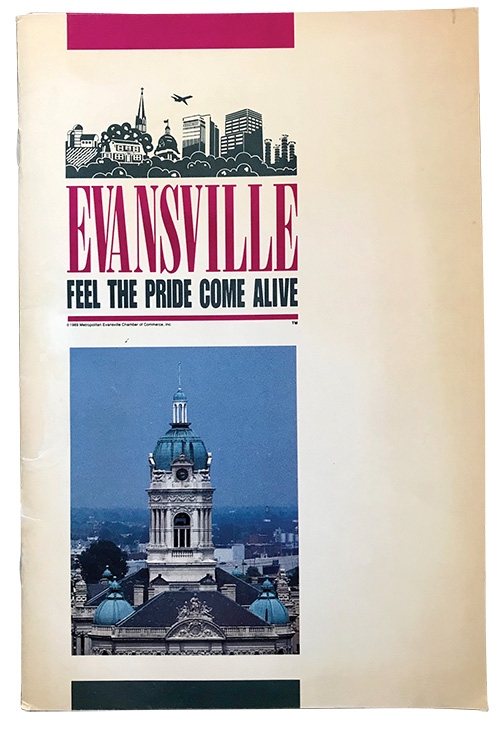 “Pride” unfortunately did not catch on in Evansville. One month after its debut, it was clear residents wanted more than radio jingles and bumper stickers to boost their love of the city. By 1990, Evansville was right back where it started in terms of an image and spinning its wheels on how to move forward.

The city may have not settled on a brand during Quick’s time in Evansville during the 1990s, but groundwork was being laid for a foundation of growth. While Appler and the airport board’s new terminal project kicked off the decade, Quick and other city and business leaders focused their energies on bringing in a Toyota manufacturing plant in Princeton, Indiana, and the beginnings of Interstate 69.

“The community was challenging itself. It was thinking how do we get I-69 down here? How do we get companies like Toyota and some of the best in the world here?” says Quick.

Though obstacles were plenty, there was success.

“Toyota Motor Manufacturing Indiana coming to Princeton was absolutely the shot in the arm we needed,” says Quick.

e is for everyone

The new millennium would bring about a new Evansville. What kicked off in the ’90s would slowly but surely gain steam into the 2000s.

In 2015 — a century after Bosse first jotted down “When Everybody Boosts, Everybody Wins” — Evansville would be awarded funding through the state’s Regional Cities Initiative. This boost would help Evansville and the southwestern Indiana region work to build its quality of life, economic foundation, and much more.

As a new face of Evansville began to emerge from the growth of new industries coming to town, a new branding campaign would launch as well. “e is for everyone” kicked off in 2017 with the mission to “create a platform where everyone can connect with someone or something new, find a unique way to contribute to the community, and celebrate together what makes our region great.”

“Evansville has changed for the good,” says Quick. “The brand that’s been created through the E nailed so many of the significant things the city could have.” 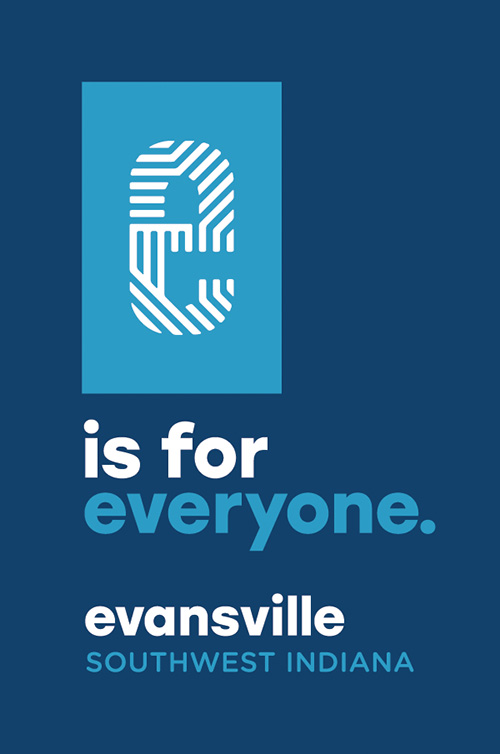 “e is for everyone” encourages businesses, residents, and anyone and everyone in Evansville to take ownership of the “E” and make it their own, showcasing the diverse options the city can offer to anyone, be it for a college student moving here to study, a family putting down roots, or a business wanting to start up.

As the city continues through this period of growth and change, promoting that “e is for everyone,” still shows how Bosse was right more than 100 years ago. When we all come together, we all will succeed.

The current slogan of Evansville certainly won’t be the last, and that is a good thing.

“Evansville has so much potential, and the potential is still untapped. That’s why it keeps growing, and that’s why every few decades, they have a new slogan come out,” says Appler. “It has to be fresh. As long as you’re changing and moving forward, developing, and the community is together, I think that’s how cities and towns grow. And I think that’s how Evansville continues to grow.”