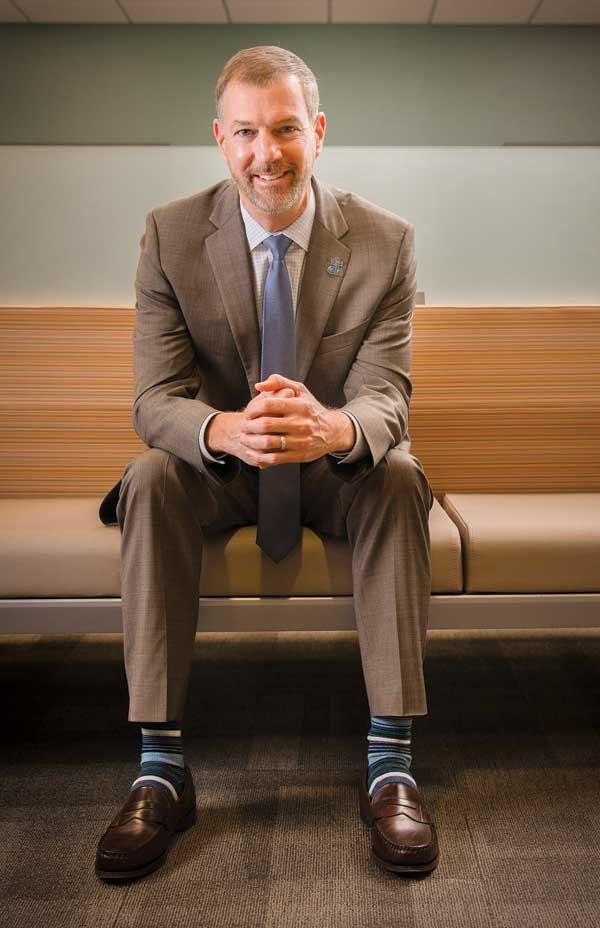 Working in the healthcare industry was not in the plans for Shawn McCoy. In fact, he was targeted to join automotive giant General Motors in Toledo, Ohio, upon graduating Purdue University.

“At the last minute, I decided to come to Deaconess. That was a huge decision for me and changed everything,” he says. After two and a half decades with the health system, McCoy now finds himself serving as chief executive officer.

As a young engineer right out of college, did you have any special mentor relationships?

My first boss Bruce Epmeier. He really helped my career. Very patient, always trying to help me grow as a person, grow as a manager and in my career. My second mentor actually was Linda White. She has been a mentor to a lot of folks within Deaconess, but also a mentor to many outside Deaconess.

When you became the administrative director for the emergency department, you were the first non-clinical person in a clinical role. How steep was that learning curve?
Peter Stevenson, the medical director and really a third mentor, helped me understand the medical field, relationships with physicians, and how to get the most out of folks. Peter was a huge part of my life for a number of years. (Dr. Stevenson still serves Deaconess as an emergency room physician.)

Once you joined the administrative suite, you were heavily involved with facilities. How did that change your career?
Being in charge of facilities gave me the opportunity to develop the original business plan for the Deaconess Gateway Hospital; this involved putting the business plan together and ultimately taking it to the board of directors for approval.

That probably seemed like at the time — and I guess it was — a huge leap?
It was a major risk for the health system. We were concerned. It originally started as a 60-bed facility, but on a plane coming back from a conference, Linda and I decided to announce it would be 100 beds at the press conference later that day. We ended up building the first tower with 116 beds, and within two years we were out of space and adding another tower. When the volumes were low in the first year, the board stood behind us the entire time. They knew what the plan was. They knew the long-term vision. In the second year, the volume started coming in, and we’ve had three additions since, with another addition going up now.

How do you follow a local business legend like Linda White?
Well, Linda is irreplaceable. She told me early on you have to be your own leader. I told her, “I am going to be different, and that’s an OK thing.” When you hear the name Linda White, you think Deaconess. She always will be Deaconess.

Once again Deaconess is expanding its footprint?
I want to make sure we have the quality and level of service to be able to take care of the needs of our families here. I don’t want people to have to leave town to receive services. If they need emergency services, I want to have that level of care here. We are trying to be the regional provider of care in the area.

We’re going to have enhanced levels of services for spine, stroke, and post-stroke patients (at the new Orthopedic and Neuroscience Hospital). We’re going to have an orthopedic surgeon on site and available to care for any acute orthopedic need you many have. That is not a service offered today. It’s a game changer.