On Oct. 31, 1942, Evansville’s shipyard rolled out its first landing ship, tank, otherwise known as the LST. These compact but maneuverable water vessels were to be a key element in the oncoming Normandy Beach operation.

It’s a well-known story throughout Evansville and the region how the River City and Tri-State came together during World War II to help in the war effort. If a man or woman wasn’t making bullets or riveting together P-47 Thunderbolts, they were down at the shipyard crafting LSTs.

LSTs were constructed to land battle-ready tanks, soldiers, and supplies on enemy shores. Evansville’s shipyard — which cost $6.358 million to build at the time and was located on 45 acres south of Ohio Street between the old Southern Indiana Gas and Electric Co. generating plant and Mead Johnson terminal — laid its first keel on June 25, 1942. Over the course of its lifetime, the shipyard was the largest producer in the country, churning out four ships a month at first and eventually launching ships every three to four days. The Evansville Shipyard is still recorded as the largest employer in Evansville’s history, with a peak employment number of 19,213. 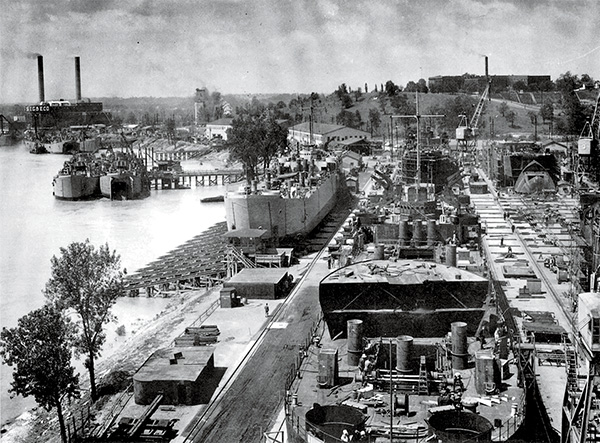 Though the LST 325 was not made in Evansville, the community has been her home for the last 15 years. And in June, she found a spot front and center with the move to the completed LST 325 Visitors Center and mooring spot.

“It’s been on the horizon for a long time,” says John Tallent, president of the USS LST Ship Memorial Inc. Board of Directors. “Then all of a sudden, it got up close and personal.”

The board of the LST 325 and the city of Evansville have had a long-standing contract, according to Tallent, which would grant the former warship and current museum a spot Downtown should the casino boat ever be removed. Once legislation passed in 2015 allowing Indiana casinos to move on land, Tallent and the board members of the 325 began their plans. The hope was not only for a new mooring facility along the Downtown riverfront, but a visitor’s center building — thankfully both came to fruition. The project broke ground in June 2019 and was finished by late spring 2020.

“The city supplied a large chunk of the money [for the move and building]. Tropicana put $1 million into the pot, and the LST and Evansville Convention and Visitors Bureau put some money up as well,” explains Tallent.

The Port Authority managed the administering of the money and the contracts for the build. Morley Corp designed the project and local contractors were brought in for the two parts of the new complex. ARC Construction built the new visitor’s center and outside facilities, while Skanska handled the pontoon and mooring facilities for the LST herself. Tallent explains the facility was essentially a built-to-suit project, with the Evansville Parks and Recreational Department working alongside the Port Authority to plan the build and input from the LST 325 board as well. 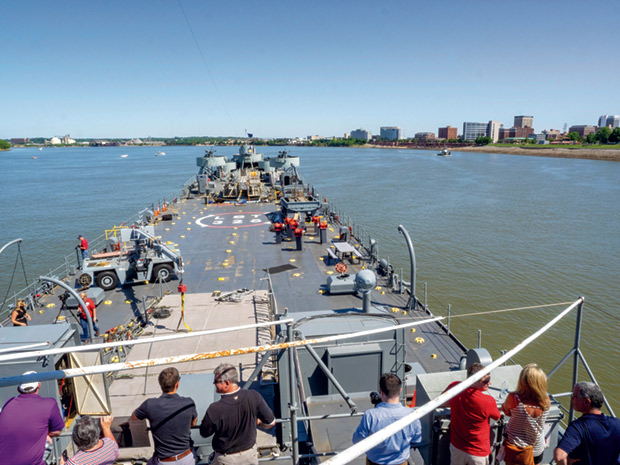 “I’m telling you, Evansville is blessed,” Tallent adds. “The city has some super people working here.”

Tallent is heavily involved with the ship, though he did not first see her in Evansville. A native of Cincinnati, Ohio, he first laid eyes on the 325 in 2006 in his hometown.

“I about passed out because I served on the same hull type in Vietnam. I couldn’t believe what I was seeing,” he says. “I found out more about it and came down to visit a couple times in Evansville.”

In 2012, Tallent decided to join the crew of the LST 325, working his way through various jobs on the ship.

“Evansville is an extraordinary and vibrant community. They’ve got a great business community that is very engaged, they’ve got great leadership, and the people are just super,” he says. “The support is just so essential and so in depth here. It’s hard to describe.”

That support has and continues to be an important part of what the LST 325 is. The only operational landing ship, tank, in the U.S. still in its World War II configuration, the 325 was launched in Oct. 27, 1942, and commissioned on Feb. 1, 1943. She served in the European efforts during WWII as part of the invasion forces at Sicily and Salerno, Italy, and at Normandy, France, during the D-Day operation.

After the war, LST 325 was reactivated in 1951 for service in the construction of the arctic DEW line radar stations. She subsequently was placed in the National Defense Reserve Fleet before being acquired by the Greek Navy in 1964. She remained in Greece until 2000, when The USS LST Ship Memorial, Inc. purchased her from the Greek government. She crossed 6,500 miles from the island of Crete in the Mediterranean Sea to Mobile, Alabama. Donations from the public and work from on-board volunteers brought the ship up to public presentation in September 2001 in Mobile, just eight months after she returned to the states.

Over the next four years, she would make several trips around to many ports of call in the U.S. On Oct. 3, 2005, the LST 325 arrived at her new homeport in Evansville, where she has remained. 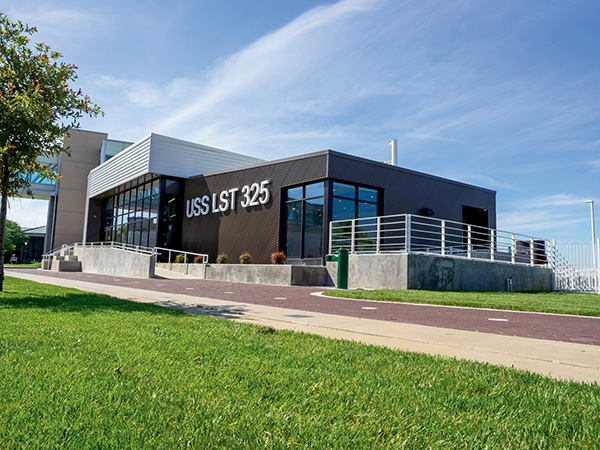 The new facility along Riverside Drive is just the next chapter in this “Grand Old Lady’s” history, as she continues to astonish and educate visitors on her decks each year. With the new facility, Tallent says, the board and staff hope to not only share LST 325’s story, but the story of homefront industry in World War II.

“The entire ship itself is a museum, but the space in the building gives us an opportunity to put up some rotating displays that focus on specific events or time periods and tell the story of the LST from inception and WWII to Korea and Vietnam to today,” he says. “Also, it lends itself to a lot more telling of the story of the Evansville shipyard.”

On June 13, a skeleton crew of just 30 moved the LST 325 to her new home a few miles down the river. Spectators lined the riverfront to watch her sail to the new mooring, an event that has been anticipated by many in the city. This new spot was just as important as the 3,000-square-foot building constructed on shore. Mooring the 325 is more than just tying the boat to a dock and is no walk in the park, says Tallent.

“We had an enormous number of meetings in the design phase about what would meet our requirements,” he says. “For instance, it had to be a totally passive mooring, meaning when the river goes up and down, no one has to go out and change the lines [that secure the boat].”

The back and forth has paid off, however. The new facility opened to the public on June 27. And while COVID-19 has changed many things — the LST 325’s board decided in June to cancel its annual cruises for this year — Tallent and members of the crew still are excited to finally bring the ship to the heart of Downtown Evansville.

“Being up at Marina Pointe was good for us, and I think it was good to be there,” says Tallent. “But down here, we are fully integrating into the life of the community and the business community. One of our goals is to develop synergies with Tropicana and the hospitality industry, where we become a part of things to see and do in Evansville.”

The hope with creating such partnerships is to keep not only the history of the LST 325 alive, but the memory of those who served — both on the war’s front lines and back home in the factories.

“The LST 325 is a piece of literal living history. It’s well worth the effort and expense to keep it alive. It’s for the American public,” says Tallent. “It’s about an accomplishment of the American public. And we’re proud to show it off and help people understand the history that most of them are totally unaware of.”