Christmas time tends to be filled with merriment — a pleasant season of good tidings and joy. But what happens when the jolly holiday turns into yuletide terror? 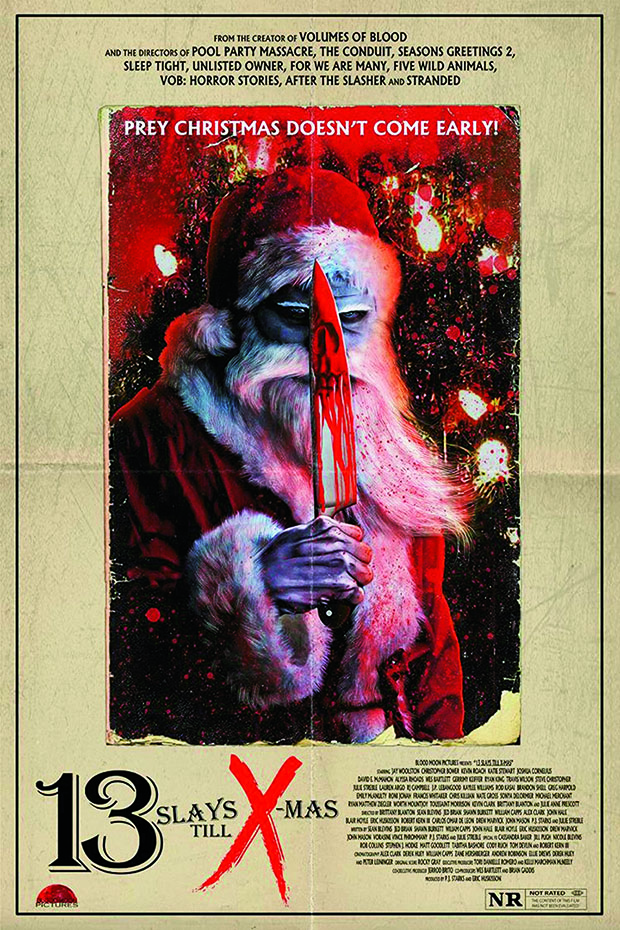 “13 Slays Till X-Mas,” a horror film anthology produced by Owensboro, Kentucky-based Blood Moon Pictures, tells the story of five random people brought to a dive bar on Christmas Eve by a mysterious email. To pass the time, they tell scary stories. As the tales unfold, the group realizes they may be connected to a terrible tragedy.

Uncharacteristic of most films, each “story” told is shot by different filmmakers from across the country, with the majority shot in Owensboro. Each filmmaker — 15 in total — was given full creative control, with only a list of technical guidelines to adhere to, in order to make sure the film, which was released in March 2021, was visually cohesive.

“It was probably the hardest project I’ve ever produced, because I haven’t done it before where everyone was completely spread out and producing an entire movie where you can’t be on every single set,” says Blood Moon Pictures co-owner P.J. Starks.

“When we were making our second one, I had come up with the idea for ‘13 Slays Till X-Mas,’” he says. “We kind of put it on the shelf and didn’t necessarily plan on doing anything. When we were struggling to get the third feature anthology financed, I decided to pull this one off the shelf, because I knew it was something that could be quick and fun and easy and not take a whole lot of capital to make.”

Music for “13 Slays Till X-Mas” was scored by Rocky Gray, best known as the former drummer of alternative rock band Evanescence. The film’s actors include Kevin Roach, an Evansville resident and managing artistic director for the Evansville Civic Theatre, who has also worked on Starks’ previous two horror films.

“Horror movies at Christmas are some of my favorites because you don’t see them that much. This is kind of the anti-Christmas movie,” says Roach. “It was definitely a neat experience to finally be a part of one of those.”

“13 Slays Till X-Mas” is currently available on Blu-ray through screamteamreleasing.com. Starks says Blood Moon Pictures also has a contract with Comcast to begin streaming on its platforms starting in December.