Snow may not be on the ground just yet, but the fluffy precipitation will be showing up in mailboxes nationwide well before winter arrives.

The United States Postal Service recently released its Songbirds in Snow Forever stamps, featuring the artwork of illustrator Robert Giusti. Each of the four designs features a bird perched in snow-dusted trees. The stamps come in booklets of 20, with the four designs repeated five times, and can be purchased online or in stores.

Included in the collection are images of the gold-crowned kinglet, cedar waxing, red-breasted nuthatch, and the northern cardinal.

Most recognizable to Hoosiers, of course, is the cardinal — Indiana’s state bird. The stamp features a male cardinal sitting on the branch of a holly tree; the cardinal’s red plumage strikes a stunning contrast to the holly leaves, but matches the red drupes growing at the center of the leaves.
The cardinal was chosen to be Indiana’s official bird in 1933. In addition to Indiana, the cardinal also is the state bird for Illinois, Ohio, North Carolina, Kentucky, Virginia, and West Virginia.

Cardinals mate for life; once together, it is uncommon to see a male cardinal without a mate. Easily seen during winter against the bright-white Indiana snows, the male is a bold red color with a black mask. Females’ coloring is a dull brown, with red crest, wings, and tail. Both males and females have a distinctive crest on the head.

Much like the recognizable coloring of the redbirds, cardinals also have a distinctive song. Used to mark their territory, males use song to ward off other males or to warn of predators. While it sounds cheery to the human ear, cardinals’ melodic chirps are a mode of survival.

For more information about the Songbirds in Snow Forever stamps, visit about.usps.com/news/national-releases/2016/pr16_063.htm. 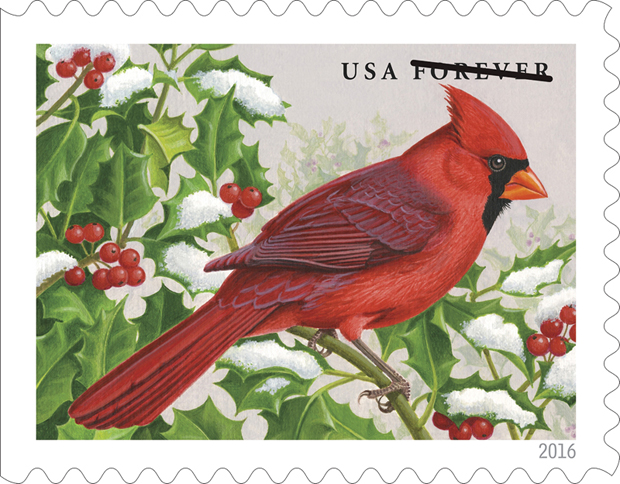