What are the two best winter words? Without a doubt, for me, they are “spring’s coming.” But for school-aged children, the best two winter words are “snow day!” With a forecast of two to three inches of snow the day this issue of Evansville Living went to press, the Evansville Vanderburgh School Corporation issued its early morning statement to the delight of the more than 25,000 students in the county, many of whom likely already were awake, checking their Twitter, Snapchat, and Instagram feeds under the covers for the good news.

A native of mild-weathered North Carolina, writer David Sedaris recounted a weeklong, snow-induced vacation when he was in the fifth grade for the Dec. 22, 2003, issue of The New Yorker magazine:

On the fifth day of our vacation, my mother had a little breakdown. Our presence had disrupted the secret life she led while we were at school, and when she could no longer take it she threw us out. It wasn’t a gentle request but something closer to an eviction. “Get the hell out of my house,” she said.
Dusk approached, and as it grew colder it occurred to us that we could possibly die. It happened, surely. Selfish mothers wanted the house to themselves and their children were discovered years later, frozen like mastodons in blocks of ice.

Growing up with a schoolteacher mother, my husband recalls a different snow day reaction: “My mother, a second-grade teacher, was often more enthusiastic about it than even I could be.”

I don’t know that any of our mothers locked us out of the house on snow days, and though winter storms can be deadly, we’ve all lived to recall our favorite snow day memories. I asked the Evansville Living staff to describe what the best two winter words mean to each of them.

Jessica Hoffman, account executive: Watching Bob Barker on the Price is Right in my pajamas.

Trista Lutgring, senior writer: For me and my cousins, it meant long treks up tall hills with a sled behind us for a day full of sledding! In Perry County, there were plenty of hills that kept us busy for hours.

Zach Straw, photographer/graphic designer: Snow days are amazing — a break from school and assignments. Regardless of your age, they’re a time to bundle up, drag the sleds to the nearest hill, and spend the day being a kid!

Jordan Evans, marketing and circulation coordinator: Going outside to play in the snow — building snow forts, making snowmen and snow angels, and sledding. After the first snow, we also made snow cream to eat. This is like an ice cream made with snow, cream, Milnot/milk, sugar, and vanilla. This may be followed by hot chocolate.

Emily Miles, editorial contributor: Those words meant my dad calling in “sledding” to work and a trip with him to Helfrich Hills Golf Course. It meant hot chocolate and marshmallow fluff with my mom and a dog bouncing around me as I tried to build snowmen in the backyard.

Amanda Redenbaugh, graphic designer: Snow days were fun when I was little, especially in Northern Indiana (LaPorte). Snow angels with my little brother and sister were fun memories. My mom always would have hot chocolate ready for us when we came inside.

Zach Wehner, senior graphic designer: To me it meant a full day of playing outside with the neighborhood kids. We had a huge hill where we would have sled races throughout the day. It usually ended up with a sleepover and long night of video games.

Nicole Neff, managing editor: Sleeping in and watching cartoons — usually Bugs Bunny and Tom and Jerry — when we would wake up.

Heather Gray, creative director: I hate being cold, so I opted for reruns of the Little House on the Prairie and my grandmother’s cinnamon toast!

Perhaps Heather despises cold so much because she was born right after the great blizzard of 1978 brought high wind gusts, low wind chills, nearly two feet of snow, and eight-foot drifts to the Tri-State.

Happy New Year! If you find yourself snowbound, I hope the annual Best of Evansville issue will keep you entertained for at least part of the duration. 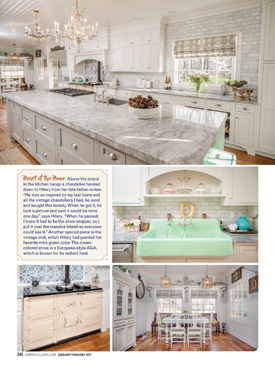 Ever since my days of cooking in an Easy-Bake Oven, I’ve been impressed with fancy stoves and ranges. My own gas stovetop is nice enough, and I do have a double oven, but it’s the European ranges by La Cornue and AGA that capture my attention in home magazines. While there is plenty to admire in Hilary and Trey Denton’s home on Cedar Hill Road, I’m particularly drawn to their cream-colored, cast-iron, English-made AGA range in their sparkling kitchen. Bon appétit!