For most homebuyers, the kitchen is the heart of the home. A nexus of activity including family time together and cooking, the kitchen is where food is prepared and shared with loved ones and friends. Anthropologists know food sharing is one of the most culturally universal human activities, so it is no wonder that when we have the opportunity to raise our kitchen game to new heights, we do. Add a bad habit of watching HGTV, and this new game can get costly. Toss in a Food Network addiction, and you find the core kitchen truth: the stove is the workhorse of the kitchen.

To use a stove is to cook. Alton Brown in his 2002 cookbook “I’m Just Here for the Food” gives us this equation: food + heat = cooking. Heat is very important to a stove, and is different from temperature. Temperature is measured in degrees Fahrenheit or Celsius. Heat is measured in British Thermal Units or BTUs, where a BTU is the amount of energy required to warm one pint of water one degree Fahrenheit.

While a match is very hot and has a high temperature, it lacks the BTUs to warm a bathtub or sear a steak. By paying special attention to heat, as well as top-notch design and manufacturing origins, we begin to understand the differences between a $15,000 AGA cast-iron stove, a $55,000 La Cornue Grand Palais 180 — the crown jewel of their Château Series — or a $699 stainless GE gas range from Lowe’s. 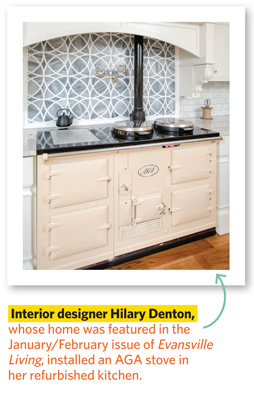 The AGA stove, or cooker as they are called in England where they are made, is famous for its timeless design and cast iron construction, which allows for the supremely gentle and even distribution of heat. Because of this, the oven is the soul of an AGA. To keep all that cast iron ready to cook, they also are famous for always being on. Being well insulated, however, they release the same amount of heat into your kitchen as approximately a dozen 100-watt incandescent lights. They also are famous for their enamel colors, which come in dozens of options. And like a great stove, the burners can put out an excess of 20,000 BTUs per hour each.

In France, the La Cornue Company dates back to 1908, when they developed the first convection oven. Their burners and cook tops come in a range of configurations, crank out an excess of 20,000 BTUs per burner, and — like the AGA stoves — feature timeless designs with 50 enamel colors, some custom.

Not to be outdone in the United States, BlueStar Cooking Company has been manufacturing stoves in Reading, Pennsylvania, since 1880 — and their high-end commercial quality stoves come in 750 color options. BlueStars are priced competitively to AGA stoves, and embrace a more contemporary style that looks fabulous in stainless. You don’t have to sacrifice heat when you spend a fraction of the cost of a La Cornue flagship stove — the BlueStar’s premium burners scorch a whopping 25,000 BTUs, while their burners geared for sauces keep a steady 130 degrees with enough heat to do much more. 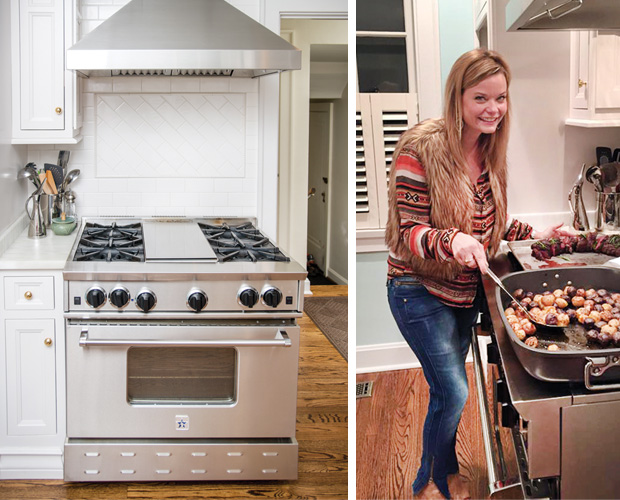 ▲ Scott and Susan Hyatt knew they wanted a premium stove when they began to renovate their kitchen in 2015. The couple’s search would bring them to the BlueStar line, made in the U.S. and priced competitively to the European AGA stoves. Susan adores the stove; at right, she gives the BlueStar a whirl soon after it was installed in 2015.

When Scott and Susan Hyatt began the 2015 renovation of the kitchen in their 1928 home, the hunt for their favorite stove landed them with BlueStar, where Susan to this day is ecstatic about their stove.

“We didn’t want just any stove. We love to cook, and we love to entertain. And frankly, I don’t have time in life to waste on things that aren’t amazing,” she says. “So we asked tons of people who cook, chefs like Scott Schymik, and the answer kept coming back to BlueStar.”

Like owning an Audi S8 and knowing how to drive it well is the key, Susan knows how to drive this Audi of a stove.

“I love searing vegetables; you can caramelize them without burning them. I love, love cooking steak. You simply cannot cook with these results with a stove that is not this hot,” she says. 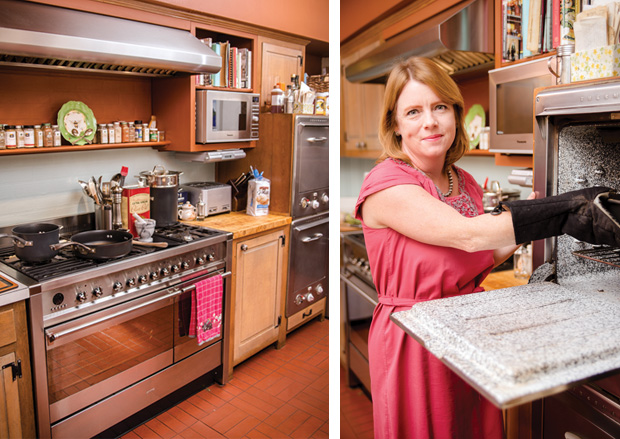 ▲ With an impressive output of BTUs and a smaller price tag than an AGA or BlueStar, it isn’t hard to see why Kristen Burkhartt enjoys her SMEG stove. She also has two stacked 1947 Thermadors installed by the Karges family during their renovation of the kitchen that same year. The knobs of the two conventional ovens were modeled after dials and controls on World War II airplanes.

Go back across the world to Italy and you’ll find Bertazzoni stoves (available at Ferguson Enterprises), and their cousin, SMEG. SMEG stands for Smalterie Metallurgiche Emiliane Guastalla, which translates to Metal Enameling Plant from Guastalla. Based in the Northern Italy town of Guastalla, SMEG was actually started by Vittorio Bertazzoni in 1948, and they compete to this day for Italian kitchen appliance dominance with their same-named cousins in the same small Italian city. Kristen Burkhartt snagged a SMEG for her kitchen at her home along Sunset Avenue in Downtown Evansville and has not been disappointed.

“I have a 48-inch, six-burner, double oven range. One is a conventional oven, and one can operate both as a conventional oven or a convection oven,” she says. “I love the high output burner. One burner has larger flames for different kinds of cookware, for woks and stir-fry, and one burner is for lower, consistent heat for sauces and crusts. I have been really happy with the results.”

It is easy to be happy with a Bertazzoni  — in a side-by-side comparison a Bertazzoni reveals similar Italian styling, a higher BTU output, and a smaller price of an AGA or BlueStar with impressive results.

But when BTUs really count, and you want to sear with the best, come back to the U.S. for a Southbend. Now manufactured in North Carolina, this range has roots with the South Bend Range Company founded in 1898 by two South Bend, Indiana, real estate agents. Workhorses of commercial kitchens all over the country, Southbend ranges are truly made for the restaurant world. You can order one for your next kitchen renovation or new home build, and a 60-inch, six-burner, double oven with a raised griddle over a broiler still will set you back less than a BlueStar of similar size. 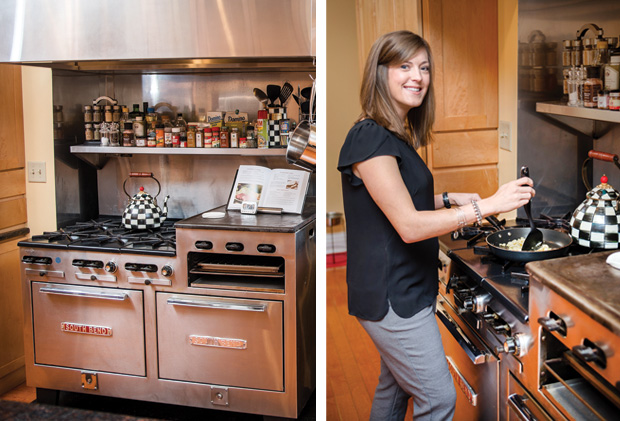 ▲ When David and Lindsay Whitehead bought their Lincolnshire home, they were surprised to see a vintage Southbend stove already installed in their kitchen. Originally manufactured in South Bend, Indiana, these stoves take home the gold in BTU production — nearly 30,000 BTUs per burner.

Or you can buy a house with a classic, vintage Southbend already installed, complete with a true commercial grade hood. While you can’t count on such real estate availability, David and Lindsay Whitehead scored on the purchase of their Lincolnshire home.

“We were kind of stunned when we saw this at first, like we had hit the kitchen stove lottery,” says Lindsay. “The more we thought about it, the more excited we got for the entertaining and culinary possibilities with having a stove like this. It definitely has inspired us to keep our kitchen skills sharpened.”

With nameplates that read South Bend, and not Southbend, the Whiteheads’ range dates prior to 1982. Not only is their stove the inspiration for a kitchen design in a custom home now under construction across the river in Henderson, Kentucky, but it also is the winner of the BTU contest at nearly 30,000 BTUs per burner.

Combined with the two ovens and the raised broiler and griddle, their stove puts out a combined 300,000 BTUs per hour. That’s enough heat per hour to heat six 2,000-square-foot homes. Though it isn’t blasted through ductwork, like the heat being circulated in a convection oven is more efficient at heat transfer, it is a pinnacle of kitchen awe, power, and finesse none the same.

You know what they say: “If you can’t take the heat, then get out of the kitchen.”

Fun in the Oven 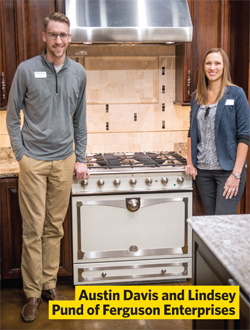 For more than 100 years, La Cornue has brought the excellence and style of French culinary tradition into novice chefs’ homes. They began under the principle that every client is unique and deserves a kitchen that caters to their specific needs.

Evansville La Cornue customers are “very much that specific customer who has researched,” says Ferguson Enterprises showroom manager Michelle Ferrero. “They’re seeing the brand in places like Chicago and New York and are thrilled to see it someplace locally where they can come and get the assistance they need.”

A La Cornue stove costs anywhere from $8,000 to $50,000, but Ferrero says the service customers receive in exchange is the highest quality. Ferguson (6620 Interchange Road) also carries BlueStar ranges, which compete in the same price range at $4,000 to $20,000.

“If they really are a true cook and it’s their passion, then they want something that’s going to perform like a professional appliance,” says Ferrero. Those homeowners looking to add an AGA to their kitchen lineup are in luck as well. According to the brand’s website, Trend Setting Appliances (951 N. Congress Ave.) is a local distributor.

For amateur chefs not set on the European models or who wish to buy American, King’s Great Buys Plus (5010 E. Vogel Road) carries the Thermador line of professional, high-end stoves, as well as Whirlpool’s Kitchen Aid brand gas ranges, also popular among homeowners with chef-style kitchens.

Another destination to explore on a search for a range is Wayne’s Appliance (5719 E. Morgan Ave.), which carries Kitchen Aid, as well as Jenn-Air, a Whirlpool brand established in Indianapolis in 1947.