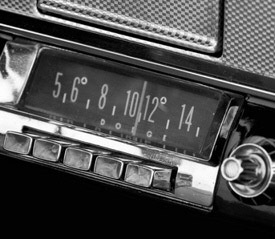 Musical memory begins with Johnny Cash, of course, when recalling my songs of summer — “Jackson,” “I Walk the Line,” “Ring of Fire,” “A Boy Named Sue” — “The Man in Black” providing the background music during my elders’ euchre games and horseshoe matches. They indulge in the hops and barley market, their empty brown bottles lined up across picnic tables, like the stalled march of a glass army, some discarded in the grass, fallen soldiers with names like Sterling, Falls City, and Stroh’s, the late 1960s, the decade of my birth, barefooted southern Indiana July days “hotter than a pepper sprout.”

Fast forward cassette-like into the 1970s, to the city pool, my chlorinated afternoons, wicked scratches on my midriff from the stem of a rented inner tube, my summer smile sticky and sweet from taffy as I hear diving board boings, lifeguard whistles, swimmers’ splashes and squeals. WTCJ reverberates off the inner tube-infested water: “Crocodile Rock,” “You’re So Vain,” “Listen to What the Man Says,” and Marvin Gaye asking, “What’s Going On?”
There’s an 8-track tape, my first, in our family’s Ford LTD, the label bubbled from too much front-seat heat: “Jim Croce’s Life and Times.” The cork bobbers on the lines of our cane poles sticking out the backseat window bob as if invisible fish inhabit the country road breeze. “Bad Bad Leroy Brown” plays. The adults allow us to sing “the baddest man in the whole damn town” without replacing damn with darn.

I walk the sawdust grounds of Tell City, Ind.’s Fourth of July Picnic. There’s the Pirate Ship funhouse with its hall of mirrors. I see my reflection stretched, fly-eyed, then squashed and turned troll-like; from there, we are herded into darkness where unseen carnival hands reach through wall holes to touch us. Exiting, I walk by the games of chance — the ring toss clinks, the paddle wheel clacks — and gravitate to The Tempest. Its four cage-like pods move in synchronized tilted revolutions while the cloudy-eyed carnival ride operator throttles the noisy engine another notch each time he sees the panic and plea in a green-faced kid’s eyes. I hear Steve Miller blasting from the Tempest’s speakers: “Jungle love, it’s driving me mad, it’s making me crazy …”

From Tell City, I hitch a ride in my Uncle Rick’s red Pontiac LeMans to Santa Claus, Ind., the death highway obviously designed by roller coaster engineers and inspired by camel humps and the curvature of corkscrews. I am seatbelt-free in the back, wedged snugly between two high school girls — a good gig for a grade-school boy like me if you can get it. Exceeding the posted speed limit, the car lifts with each hill crest, like something out of “Starsky and Hutch,” Rick and his buddy up front laughing maniacally, the squealing girls squeezing my scrawny knees while Boston’s “Long Time” plays.

I learn to play air guitar the summer of 1979 thanks to Cheap Trick’s “I Want You To Want Me,” the same summer I experience newfound freedom via a white Indian moped purchased by my parents. Red and orange stickers adhere to its sides, giving the impression of flames while I shoot through town at 25 miles per hour. My first major moped wipeout occurs with a girl aboard. Coincidentally, this occurs at the same time I discover how each handbrake squeeze, especially on a downhill run, delivers the full glory feel of the female form pressed upon my back. I unnecessarily brake often, the last time occurring on a fateful patch of loose gravel. We topple. We slide. The doctor fishes pebbles from my elbow and her knee. Stitches are involved. She never rides with me again. I recall her each time I play air guitar and sing, “I’ll shine up my old brown shoes, put on a brand new shirt, get off early from work, if you say that you love me …”

This column idea occurs in Huntingburg, Ind., during a recent Dubois County Bombers summer collegiate baseball game. The Bombers organization keeps things fun and lively in the stands — music, of course, being a big factor. Between innings, a song plays, “December, 1963 (Oh What a Night),” by Frankie Valli and The Four Seasons. I recall it being the first 45 RPM record I ever owned. I played it endlessly on my parents’ stereo console, loud enough to hear through the window screen while throwing a baseball into my pitch-back net in preparation for a Little League game. I recall winning a pepperoni pizza due to this song. I was the first to call WTCJ during a contest to identify the group singing it. I treated my parents and brother at Patio Pizza. It’s still the best pizza I ever tasted. Oh, what a night.

So there you have it. My songs of summer and the random memories they evoke, yanking me to my youth when summer was summer, that magical triumvirate of seemingly endless months: June, July, and August.

You have your own songs of summer, different from mine. I hope you recall them and time travel to a younger day. I hope you continue to play them loud.