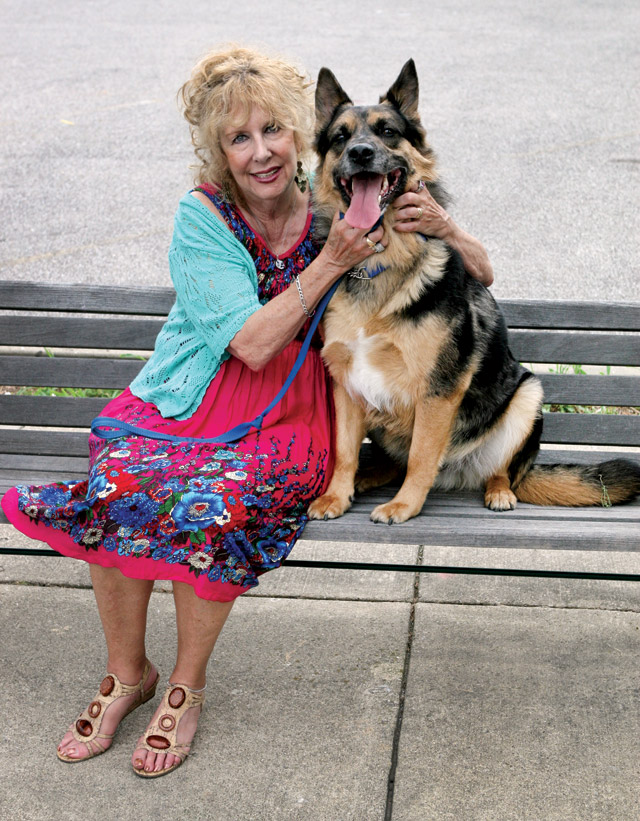 I sat down and gazed into the eyes of my new dog, Spencer. I could not imagine that this guy was rescued only days before he was to be put down. God only knows what he went through. Late at night, if there is even a slight movement or sound, his ears stand up and he growls before becoming relaxed again. We think that he might have thoughts of past abuse.

His big, brown, loving eyes are now opening to what love, caring, and normality can be. He is one of millions of animals in this country that is abused and caged up. Most wind up dead. As I sit here typing with my two happy and healthy dogs hanging out in my office, I can’t help but think of all those who will never have the chance to live.

Sometimes when we all are asleep, we will hear Spencer whimpering. It is obvious that he is dreaming that he is still in the place that hurt him. It breaks my heart when his eyes open and he starts wagging his tail, and the thumping on the floor makes us smile. My brother, Warren Eckstein, who is a dog trainer and runs “Hugs and Kisses” rescue service out of Los Angeles, told me that where my dog came from was the Auschwitz of pounds. The dogs were kept packed on top of each other in kennels. Spencer also seems very afraid to be too close to water. When I take my bath, my dog, Maxi, and cat, Fogerty, are always happy to get splashed. It took Spencer months to come in and lie on the bathroom floor; he still will not allow me to put any water on him. He is fine when my husband, Gordon, walks him and Maxi down by the river in Newburgh because he is always a safe distance from the water.

One recent evening, I put Spencer out in our fenced backyard. When I went out and called him and Maxi to come in, Spencer was nowhere to be found. I then noticed that when my husband mowed the lawn, he forgot to tightly close the back gate. As I yelled Spencer’s name once again in panic mode, thankfully he came running. I knew then that he understood this was his happy place and he will never want to leave.

While running down by the riverfront, I see many dogs lovingly being walked by various kinds of people. When you talk to any of these pet owners, you can see the love they feel for their four-legged children. We are a land of too many animal lovers to allow the atrocities that are all too common to continue.

A few months ago, we found a dog I named Trixie that was running all alone in downtown Newburgh. She had no identification. She was bloated and not breathing properly. We took her home and, although we knew she was sick, her little tail continued to wag a mile a minute. We got in touch with Proving Animals Are Worth Saving (PAAWS), a no-kill animal rescue and shelter. With tears in his eyes, my husband dropped the dog off and the shelter staff said they would call us after taking her to a vet. PAAWS visited her often and, although she had heartworm and other problems, she was going to recover. A volunteer from PAAWS eventually adopted her.

If that had not happened, there would have been two more sad eyes in my house. We had no room with our three animals; however, we fell in love with her. Somebody did not want to care for a sick dog with bladder problems. So instead of taking her to a vet, they just left her in the road. She ran over to my husband and our two dogs. The dogs acted in a manner of minutes like they had been Trixie’s brother and sister their whole lives. We knew she had to be saved.

Spencer is part of my family now, and we all are close. But he will never lose those “Spencer’s Eyes.” He went through so much for a year-old puppy. I am so thankful because when we save an animal, the real truth is they are saving us as well. They are making our souls full and they have a magic power to make you feel better about yourself. Before you buy a dog or go to a puppy mill, find a rescue dog, and you too may find a pair of “Spencer’s Eyes.”