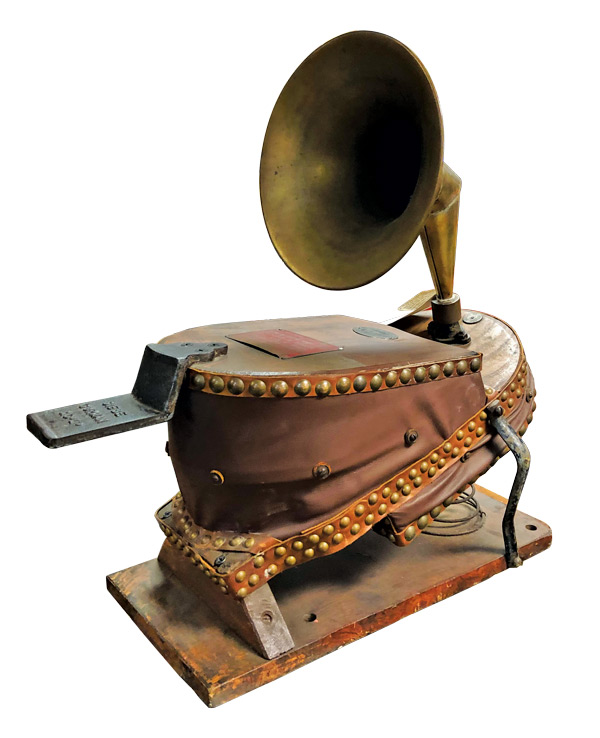 Thousands of collectibles line the stalls of Riverside Antique Mall (1205 E. Riverside Drive), but of all the vintage relics in the shop, this 1800s fire horn stands out as one of its more unique items.

Before Siebe Gorman and Company developed its famous deep-sea diving gear, it manufactured fire safety equipment, including this rare fire horn that was used in the mid-to-late 19th century.

But before this instrument alerted residents to the presence of fires, it actually was a mechanism of pumping fresh air into firefighters’ helmets using the double bellow operation. Air was sent to the firefighters’ helmets from a heavy brass foot pedal that was pressed down to release the tension of a large spring. Out of the bellow system, where the horn is now attached, was a hose up to 600 feet in length that reached the rescuer.

Firefighters would communicate how much air to pump through a system of tugs and pulls: One tug meant more air, two tugs meant more slack, and three tugs meant to pull them out immediately.

As firefighting became more efficient with the development of a self-contained breathing apparatus, Siebe Gorman attached brass horns to the bellow pump and then sold them as fire horns, which worked well as the noise they made carried for quite a distance.

“It’s quite a weird piece,” says Robert Carter, an Evansville resident who owns this fire horn. “Once you get it going, it’s pretty loud. It starts roaring after a while, but it doesn’t start out loud. It was a good fire horn back then.”

An antique collector for 15 years, Carter says he purchased the vintage fire horn at an antique road show. You can find, and own, Carter’s fire horn for yourself for $995 at booth 44 inside the Riverside Antique Mall.