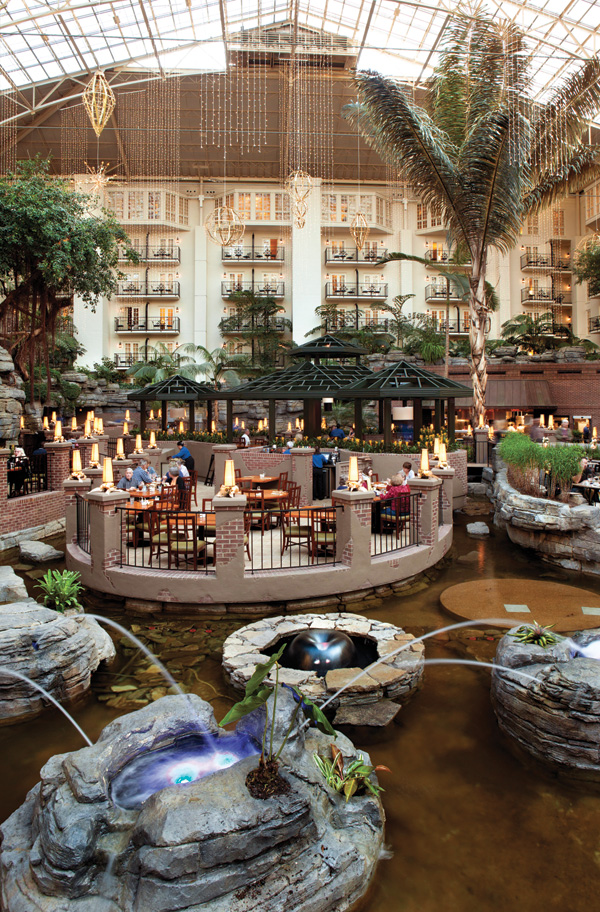 Spring break had finally arrived, and the Nussmeier family was packed and ready to go. Deviating from the usual dreaded long car ride south, my husband, Steve, a partner at Nussmeier Engraving, and I decided to keep it short this year, driving with our daughters, Carlie, 13, and Mallory, 10, only south enough — 2 1/2 hours — to get us from Evansville to the Gaylord Opryland Resort and Convention Center in Nashville, Tenn.

My family had not been to the resort since it was refurbished following flooding in 2010, which shut down the hotel for six months due to millions of dollars in damage to more than 100 guest rooms, all the exhibit halls, multiple atriums, the Cascades Lobby, and the hotel’s complex mechanical, electrical, and power systems. Its grandeur of glass ceilings and abundant gardens preserved, Opryland appeared even more magnificent to us than before the renovations.

The rooms are fairly small, but time is better spent outside the room, in the resort or in downtown Nashville, where every bar, restaurant, and street corner teems with live music. Other notable city attractions include the Parthenon, the only full-scale replica in the world of the Parthenon in Athens, Greece, and the world-famous Grand Ole Opry.

Opryland Hotel offers a peaceful respite from the urban action. The resort itself, known as a business convention and wedding destination, has restaurants, shopping, nightlife, and the occasional bride sauntering through the lobby. From the Relâche Spa, Salon & Fitness Center to top-notch restaurants, such as Old Hickory Steakhouse Restaurant and Cascades American Café, to the choice of indoor or outdoor pools, the amenities are many.

Upon our arrival, I was struck by the resemblance to a Las Vegas hotel — everything seemed perfectly manicured. Instead of the constant cacophony of slot machines pinging out their tribal call, I heard the gentle sound of running water; there are gorgeous gardens, sparkling waterfalls, and flowing streams at every turn. The lobby is spacious, as is the rest of the 4 million-square-foot resort, with fabulous flora throughout the entire facility.

Our first night, we dined on burgers and hot dogs at the Fuse Sports Club while watching the NCAA Men’s Basketball tournament. The atmosphere was electric and the food was delicious.

How exciting to take a break from work, devoid of the encompassing hive of traffic and the white-knuckled race to the sand that we normally embark upon this time of year. We really enjoyed our stay at the closer-to-home Gaylord Opryland Resort and Convention Center.