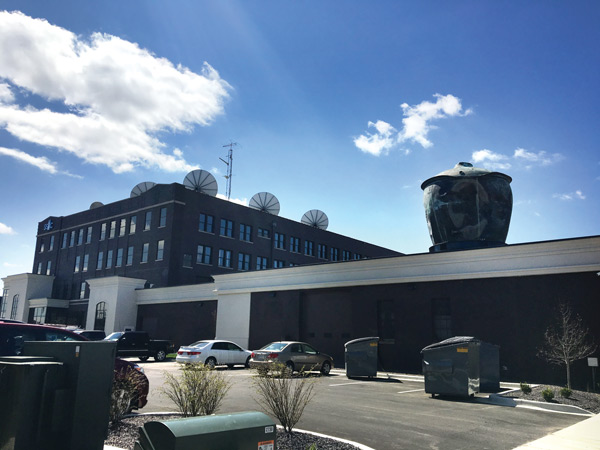 The old Sterling Brewery site presently may be home to financial services company SS&C Technologies, but a piece of the building’s storied past remains.

On March 14, workers from Powers Welding and Cranes and Odyssey Construction moved a 7,000-pound copper kettle from the old brewery onto the corner of the property’s garage.

“There was a lot of talk about where to put it,” says Mike Morrow, a contractor on the project. “We decided on the garage because the kettle is so big and would be out of the way.” It can be seen from the Lloyd Expressway.

Before being moved to its new spot, the kettle was pulled out of one of the buildings in 2014 and sat on the ground on the corner of the property on Fulton Avenue. Evansville Business first wrote about the development when the site was under construction in “Racing Ahead” in the February/March 2015 issue.

“The reason we put it on the corner was because guys would come through here and cut it apart at night,” says Morrow. “This way, the kettle could be seen 24/7.”

The decision to keep the kettle was an easy one.

It was the last kettle that was used to brew beer in the Sterling building, and Morrow and property owner and developer Jack Rogers wanted to honor the history of the site.

In the future, Morrow and his team plan on putting “Sterling Square” on the side of the kettle.