A 1950 Mercury convertible is a rare sight alone — one sporting a pearly purple paint coat with the words “Still the One” in nostalgic script along the back definitely turns heads.

“It’s a unique car,” says owner Jerry Walker. Over the last 19 years, Jerry and his wife Myra have worked to restore and customize the car. “There’s not another one in the world like it because of all the changes we’ve made.”

Jerry and Myra (who have been together for 61 years) purchased the Mercury in 2000 in celebration of their 42nd wedding anniversary. When the couple started dating in the 1950s, Jerry drove them around in a 1950 Mercury convertible. Through the years, the car was lost to the Walkers during various moves. But after their five children had grown up, they knew they wanted to find another convertible like the one they once had.

The convertible — sporting the 1965 GTO factory color Iris Mist — borrows from a few different cars to get its iconic look. The custom steering wheel comes from a 1959 Impala. The bar-grill on the front — courtesy of a 1955 Desoto. The taillights are from a 1959 Cadillac and the exhaust pipes from a Harley Davidson motorcycle. The dash, however, is a classic 1949 Mercury.

“Every idea has been our idea — every change on it is an idea we have had together,” says Jerry. “It’s our car. ‘Still the One’ on the back means the car and us both.” 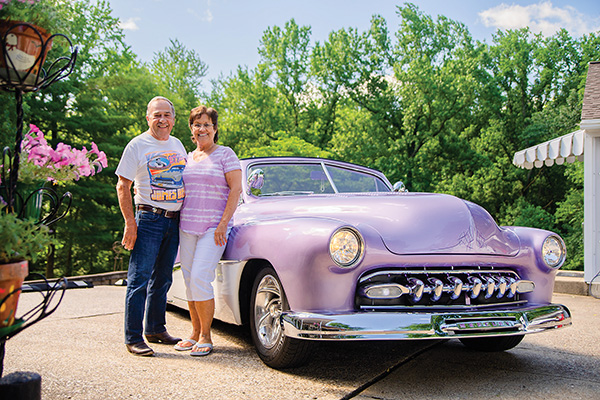