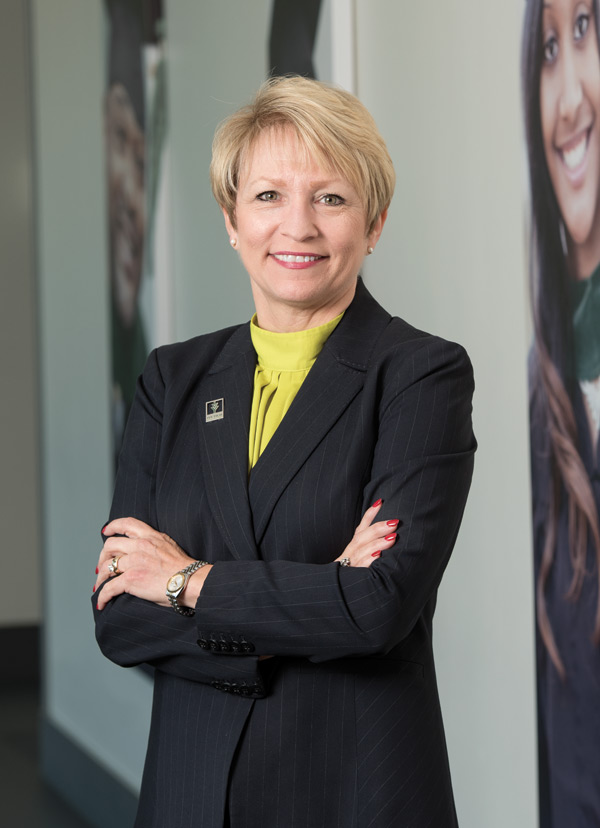 While Sue Ellspermann has served in Indiana’s House of Representatives, as lieutenant governor to Indiana Gov. Mike Pence, and now as the president
of Ivy Tech Community College of Indiana, she says her career truly boils down to one thing.

“I think most people you would ask would say I’m predominantly a problem solver, and I entered public service to do just that,” says Ellspermann, who holds a bachelor’s degree, master’s degree, and Ph.D. in industrial engineering.

In 2006, Ellspermann became the founding director of the University of Southern Indiana’s Center for Applied Research, which helps connect community businesses and organizations to universities and their resources. The experience has left an impact on her.

“I have great admiration for all three presidents of USI — doctors Rice, Hoops, and now Bennett. They really are exemplary leaders fueling the growth of USI into the powerhouse it is today, helping to promote and grow educational attainment in Southwest Indiana,” she says. “USI has served as my model
of what a public institution should do in serving a region or a state.”

How would you characterize the last four years of your career?
As lieutenant governor, I traveled all 92 counties and got the chance to hear Hoosiers’ dreams and challenges, and then come back and figure out how to leverage government resources to help us move forward. In a lot of ways, I say the last four years was falling in love with the whole state of Indiana. Having grown up in the southwest part of the state, it was my opportunity to see the rest of the state and know it at a level very few people ever have the chance to experience.

You resigned from the lieutenant governor position in early March and publicly indicated a desire to be president of Ivy Tech. Did you consider this career change as a leap of faith, a gamble, or a thought-out strategic move that worked well?
When I looked at my career, I always simply looked at how do I make a difference using the gifts and talents God gave me. Last summer, an Ivy Tech board trustee approached me after President Thomas Snyder announced his retirement. Initially, I thought that was nice but moved on. Then I started to take stock of my experience, which was a unique blend of workforce, higher education, and governmental experience. The more I thought about it, the more I really did believe I was a good fit for this executive position. So I took the idea to the governor. It took a little persuasion. The rest is history.

What is the biggest secret about Ivy Tech you want to proclaim to Indiana and beyond?
The Ivy Tech name is known very well across the state of Indiana, but few people in Indiana truly understand the concept of community college. We’ve been taught to think everybody should go to a four-year school. In most states, community college is the place where students go their first two years, and for a twofold reason — one is to save thousands of dollars in tuition, room, and board, and the other is the opportunity to gain their first degree in the form of an associate’s degree allowing them to enter the workforce or continue toward a four-year degree. In Indiana most associate degrees will seamlessly transfer to four-year institutions like USI, UE, Purdue, or IU.

What is a trait of Gov. Pence you believe would perhaps serve him well should he be elected vice president?
The thing that stands out to me is that he has a great gift of connecting with people. The governor is a very good listener. He exudes warmth and sincerity in all his actions as a leader. Gov. Pence, one-time talk show host, is an amazing communicator and would be a great negotiator across the aisle as he helped the president move an agenda forward.