Long before the first issue of Evansville Living (March/April 2000) was put on the press, I was interested in dialogue about cities. It wasn’t the political organization of cities that interested me; it was their Main Streets and neighborhoods.

My interest was inspired by a term I learned only in the early 1990s: New Urbanism. It arose in the United States in the early 1980s, and has gradually informed many aspects of real estate development, urban planning, and city land-use strategies. (The first Evansville Living Idea Home was built in Evansville’s Sutherland, a neighborhood developed by John and Susan Pickens using the principals of New Urbanism.)

During a trip to Panama City Beach, Florida, before we had kids, we visited Seaside, Florida, the master-planned community on the Florida Panhandle renowned among architecture buffs for its proportions, scale, and walkability — all tenets of New Urbanism. We have visited Seaside for close to 25 years, most recently over the Independence Day Holiday. Its iterations continue to fascinate me.

Time Magazine, in its Jan. 1, 1990, “Best of the Decade” issue, called Seaside, “the most astounding design achievement of its era and one might hope, the most influential.” 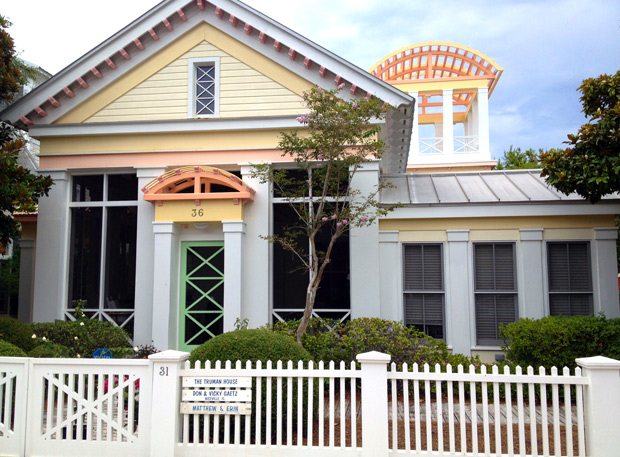 What makes Seaside so special is its whole: the pastel houses, front porches, picket fences, narrow lanes, and pavilions to the sea, leading to the star attraction – the acclaimed sugar-white sand beaches of Florida’s Northwest coast. If this sounds like a movie, it is: Seaside was the filming location for The Truman Show, which debuted 16 years ago.

The town of Seaside has more than 340 homes, cottages, town homes, and penthouse apartments. More than 200 are available to rent from the town’s Cottage Rental Agency.