T is for Thunderbolts 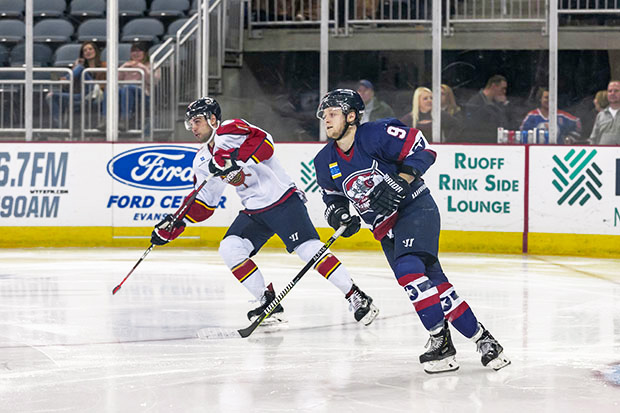 A newer addition to the Evansville sports scene, the Thunderbolts hockey team was started by local businessman and avid hockey fan Mike Hall, who secured an expansion team in the Southern Professional Hockey League in 2016. The team is named after the P-47 Thunderbolt planes that were largely manufactured in the city during World War II.

The Thunderbolts replaced the Evansville IceMen, who played at the Ford Center from 2010 to 2016 and relocated to Jacksonville shortly after leaving Evansville.

Now owned by VenuWorks, the company that operates the Ford Center, the Thunderbolts have had mixed success across their four seasons in Evansville. The team has compiled a 78-104 record since the 2016-2017 season, though it was on track to make the SPHL playoffs in the 2019-2020 season before it was cancelled due to COVID-19.

The team opted out of the 2020-2021 season but plans on returning to play in the 2021-2022 season. The Thunderbolts currently hold a five-year lease with the city of Evansville to play at the Ford Center through the end of this season.

Photo provided by The Thunderbolts