Jim McCarty Jr. still remembers the building — a two-car, metal garage with a rhinestone gravel floor and doors that lifted after turning a knob on the front.

McCarty, or J.T. as most call him, was 5 years old when his father Jim McCarty Sr. and grandfather Jacob McCarty opened the first Colonial Garden Center on the corner of Green River Road and Washington Avenue in 1958.

The location came after the decline of the family’s successful seed company business, the J. A. McCarty Seed Company, and provided customers in the area with supplies like seeds, fertilizer, plant starts, and a few trees.

“Landscaping really hadn’t become an art at that point,” says J.T. “The notion of a garden center didn’t really exist. You just went to the seed company.”

Reinventing the business and staying on the forefront of trends was how they thrived.

This approach began in the early 1920s with J.T.’s grandfather Jacob, a graduate of Purdue University, West Lafayette, Indiana, in the field of agriculture, who was working as a cooperative extension agent.

Jacob eventually left the cooperative extension world and began consulting farmers on how to rotate their crops, use new seed and plant varieties, and combat weed, insect, and pest problems. Then, the Great Depression hit.

Farmers who were purchasing fertilizer, seed, and materials from Jacob couldn’t make payments on their properties.

“All of a sudden they’re literally walking into the bank, laying their keys on the table, turning around, and walking out the door,” says J.T. “It must have been terribly disheartening.”

Jacob, however, had an idea. He worked out a deal with the banks to allow farmers and their families to rent their property until they could afford to buy it back. Since the banks were stuck with acres of farmlands and equipment they didn’t know how to manage, they employed the farmers to continue harvesting crops. The banks would pay for wages, upfront fuel costs, seeds, herbicides, and other expenses. Once the crop was harvested, Jacob split the profit with the bank.

It kept families in their homes and prevented the banks from owning several uninhabited parcels. For Jacob, it meant the start of a lucrative and successful partnership between himself and local farmers.

Through these relationships, Jacob convinced farmers to grow a certain percentage of their crops in popcorn. He then would process and sell the crop to Loews Theatres (now AMC Theatres) across the world, leading the J. A. McCarty Seed Company to become one of the world’s largest processors of popcorn.

During his time at Purdue, Jacob was a member of the fraternity Alpha Gamma Rho, where he met one of his close friends and business allies, Orville Redenbacher. It was Jacob’s entry into the popcorn industry that inspired Redenbacher to begin what would become his eponymous popcorn empire.

The J. A. McCarty Seed Company swelled until the 1950s. At this point, J.T.’s father Jim McCarty Sr. had joined Jacob in the business after also graduating from Purdue University in agriculture.

Corn blights, a rapid browning and subsequent death of plant tissue due to disease, suddenly devastated the production and quantity of popcorn, causing the seed company to take a dive. The price of crops skyrocketed. Farmers who had made deals with Jacob and Jim began going around the two and selling on the spot market.

“It broke my granddad’s heart,” says J.T. “And it also broke a multimillion-dollar corporation.” 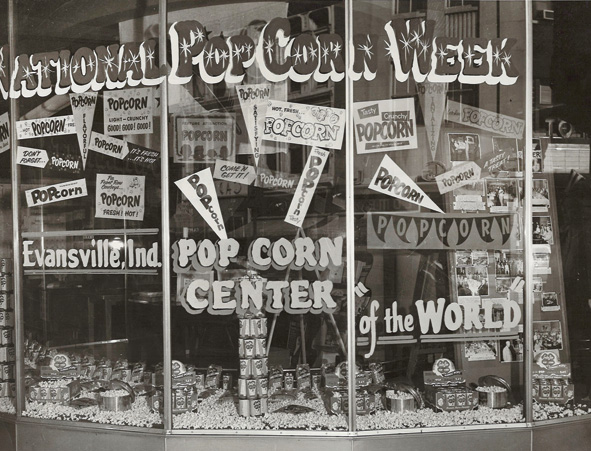 Along with their garden center services, Jim also began selling and renting other items like Drift-R-Cruz houseboats, Ranger fishing boats, and Apache travel trailers — anything to turn a profit. 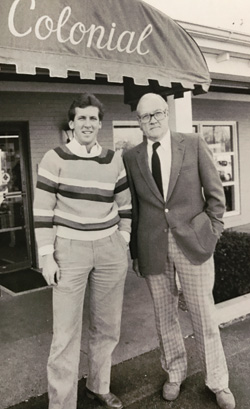 Though J.T. began working in the business as a kid, he didn’t start fulltime until after he graduated, like the generations before him, from Purdue University, in 1975.

“I started working fulltime in 1975, but I’ve really worked at Colonial since the day my dad told me to carry a bag of peat moss out to some lady’s car,” says J.T. “If I put something in somebody’s car and they gave me a quarter or 50 cents, much less a dollar, I felt like I was in hog heaven.”

In 1970, Jim bought the old Tri-State Nursery on Outer Lincoln Avenue, where Greengate Court currently is located and where Jim dove into the landscaping business. After J.T. came into the business, the two opened a second location in North Park Shopping Center. In 1980, a location in Newburgh, Indiana, followed where Newburgh Powersports stands today. In 1985, the two purchased property on the corner of Epworth Road and Division Street. In 1990, J.T. took over the business.

At the company’s height, it employed about 120 staff members, had five locations, opened seven days a week every month of the year, and brought in almost $8 million in business.

Then came the big box stores of the ’90s.

“I started getting phone calls from a number of friends who were participants in the Garden Centers of America, of which I was president, going, ‘J.T. what do you know about Lowe’s,’” he says.

With the introduction of stores like Walmart, Lowe’s, The Home Depot, Meijer, and Menards, the company was forced to adapt or fail, their tradition of ingenuity coming into play once again.

“We’ve always tried to take a progressive position in introducing new products or new services people otherwise weren’t accustomed to around here,” says J.T. “That being said, there’s certain things you can control as a retailer and certain things you can’t. One thing we couldn’t control was the advancement of the box stores. I saw it happening back in the ’90s, and I knew then we needed to, instead of having five locations in Evansville, have two or three.”

In 2006, Colonial Garden Center’s many stores consolidated to its current location in Newburgh at 3633 Epworth Road and became Colonial Classics. 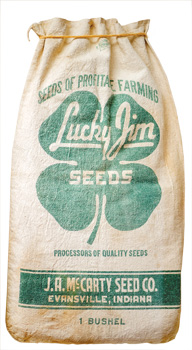 “This whole thing today really is, in my mind, evolve or perish,” says J.T.

Knowing the business would never have the purchasing power of a Lowe’s, Home Depot, or Walmart, J.T. had to find what he could offer to customers that big box stores could not. The answer was service.

With trends of both partners working outside of the home, there was not as much time for families to plant gardens or maintain yards. Customers could get products at a cheap price but didn’t have the time or know-how to plant or maintain on their own.

“They want people to help them prune their shrubs; fertilize their lawns; plant their trees; build their patios; install their mosquito preventative devices, outdoor lighting, and a fire pit; and it just goes on and on,” says J.T. “You can’t get that done at Lowe’s or Home Depot.”

The company went back to their roots of creatively providing for their customers’ needs. Today, clients can see 3-D presentations of what a landscape design’s eventual outcome will be, a technology J.T. quickly adopted.

Design Manager Matt Bell was interested in working for Colonial after graduating from Oakland City University, Oakland City, Indiana, with a degree in industrial technology. He had been working in a corporate job he didn’t enjoy but knew he loved landscaping. Throughout high school and college he worked for both Buschkoetter’s Nursery in Jasper, Indiana, and Landscapes by Dallas Foster. Four years ago, Bell saw an ad on Monster for a job at Colonial and visited on his day off.

“I asked, ‘What would it take for you to get some computer-aided drafting into your landscaping?’ And J.T. said, ‘We’re already doing that,’” says Bell. “I said, ‘Are you kidding me? Unfortunately, that’s what I wanted to bring to the table.’”

Bell did get hired and, instead of doing 2-D drawings, began work on 3-D conceptual presentations.

“The look on our customers’ faces when we do the presentation and they look up and say, ‘Wow, is that my house?’ That really gets me excited,” says Bell. “It really is like fuel to keep doing it better and better.”

At Colonial, J.T. sees his employees as an investment for the company’s future. Pouring resources and opportunities into his employees will lead to success down the road.

Jennifer Addison, operations coordinator, has been at Colonial for eight years. When she started, she only wanted part-time work while going to school fulltime. J.T. allowed Addison to work split shifts, coming to work for a couple of hours before going to school for the day then returning to work again. She left the company for a year but came right back to Colonial.

“That’s what kept bringing me back was working outside,” says Addison. “I really enjoy the work. I enjoy the people. I enjoy the customers.”

It is the relationships J.T. has built with his employees that keeps him hopeful about the future of Colonial. At 64, with the legacy of his family’s business on his shoulders, the future is not something he easily can hide from, but it also doesn’t worry the third-generation owner. He predicts he still will be working 10 years from now. Maybe not as much, he admits, but still working.

“He is very hands-on with the business,” says his wife Julie McCarty, who also is now involved with the business after working at Old National Bank for 26 years. “We all know it around here. J.T. is not happy unless he is talking to a customer, planting something, or on a piece of equipment.” 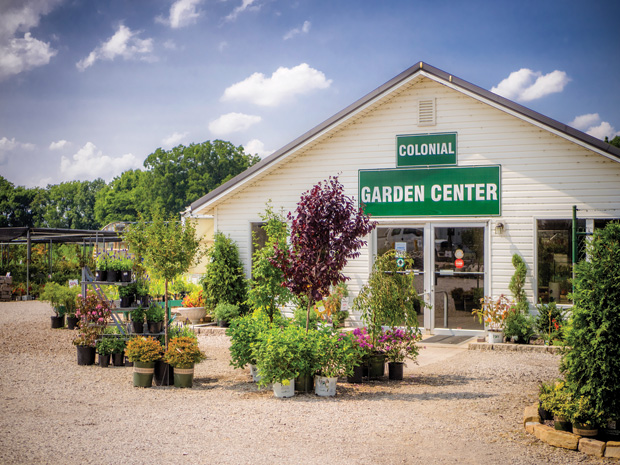 ▲ The first Colonial Garden Center, top left, opened in 1958 on South Green River Road. At its height, the company had five different locations throughout Evansville and Newburgh, Indiana. Today, the company has one location at 3633 Epworth Road in Newburgh. Above, seed bag, today, J.T. still displays old seed bags from his grandfather’s company in the Colonial Classics offices.

Today, J.T. doesn’t see a future where Colonial Classics will pass down to a fourth generation of McCartys, but this doesn’t seem to bother him.

“I haven’t necessarily encouraged my kids to go into the business because it’s demanding,” he says. “It’s seasonal. It’s unpredictable because of Mother Nature. Because of my persistence and dogged determination we continued to fight the fight but evolve with the changing market.”

Through the Great Depression, crop shortages, industry changes, big box stores, economic downturns, and changing of hands, Colonial Classics has evolved and survived. The future of the company promises to be just as unpredictable, perhaps with J.T. giving up control of the business to some of his trusted and trained employees.

As a company that has reinvented itself time and time again from its beginning as an agricultural consulting business into a landscape and garden center, not even J.T. can predict the path Colonial Classics will take. Like his grandfather and father before him, he puts in hard work for rewards he may never reap. That’s what the McCarty business is all about.

“One of my favorite quotes is, ‘A man has just begun to discover the meaning of life when he plants a tree under which he knows full well he’ll never sit,’” says J.T.

For more information about Colonial Classics, call 812-853-6622 or visit colonialclassics.net. 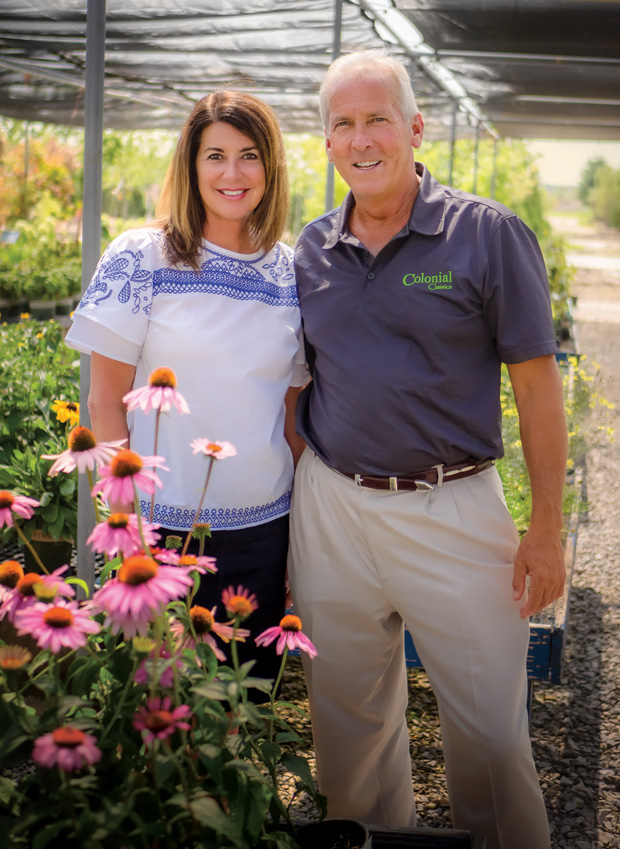 ▲ Julie and J.T. McCarty have been married for nine years. When they met, Julie was the director of talent development at Old National Bank. She retired after 26 years and now works at Colonial Classics with J.T. “J.T. and I certainly have a lot to talk about pertaining to the business,” she says. “One of the challenges is knowing when to turn it off.”
Share
Facebook
Twitter
Previous articleWe Can Do Better
Next articleChew on This