For more than 100 years, Anchor Industries, headquartered along the northern stretch of Highway 41, has progressed to become a leader in fabric and structure manufacturing. With a long list of awards and accolades, the company has pioneered innovations in tent and tarp manufacturing that has enabled the business to be passed down from generation to generation.

Founded in 1892 by Louis A. Daus and Peter Emrich, Anchor Supply Company — as it was known then — was renowned locally as one of the best riverboat supply and awning companies in the area. Nestled on the banks of the Ohio River in Evansville, Anchor furnished oil, paint, groceries, and other supplies to the popular steamboat trade.

Later on, Anchor would add canvas goods to the line to meet increasing demands for water-proof covers. The company would eventually move their business from tarps to largely manufacturing tents, becoming the industry leader in party tents.

“When there is something big outside in a party atmosphere, we’re there,” says Anchor President Pete Mogavero.

Mogavero started at Anchor in 1981 after graduating from Indiana University with a master’s degree in business administration and working in Detroit with Ford Motor Company. Looking to get out of the automotive industry, he took an opportunity from his father-in-law John Daus, who headed up Anchor at the time.

Over the course of Anchor’s 128-year history it also has grown into one of the world’s most respected manufacturers of awnings, pool covers, fabric structures and fire shelters. With about 300 team members from across the Tri-State, Anchor has been located in Evansville for the entirety of their existence. They moved from the riverfront to their current location on North U.S. 41 in 1968, where they now have more than 350,000 square feet of production capacity. 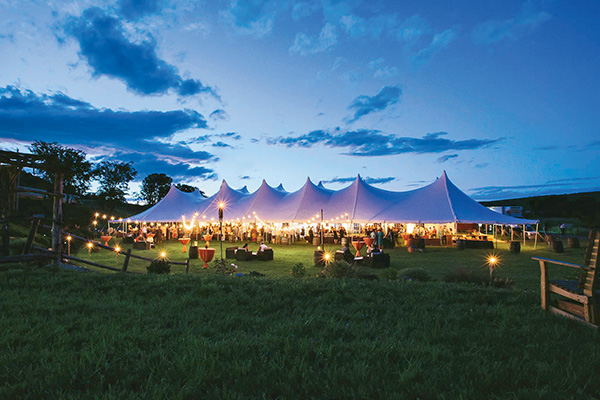 Anchor’s tents have appeared all over the country including the Olympic games, NASCAR events, presidential inaugurations, and Disney World. The company provides tents for 70 percent of PGA golf tournaments as well.

Anchor also has produced products for countries across the world in the Caribbean, Western Europe, and Asia for 30 years. Those sales account for about 5-7 percent of their total products.

“We are certainly known throughout our traditional customer base as being the folks you go to when you need a custom fabric or frame products for the outdoors,” says Christen Mogavero Schmitt. “That’s our wheelhouse.”

The great-great granddaughter of Daus, Mogavero Schmitt is the fifth generation of her family to work at Anchor. Starting at the company in the fall of 2016, she now serves as a sales representative for the family business.

Mogavero Schmitt says the company prides itself on quality, craftsmanship, and customer service and while they are certainly not the least expensive product on the market, it is these principles that keeps customers coming back.

When the COVID-19 pandemic shut down much of the country’s economy in March, Anchor already had protocols in place to continue operating safely as they were considered an essential business.

Sales slumped substantially and by May, overall business was projected to be down by 33 percent from last year. Business was so low, executives were discussing moving to a four-day work week and cutting pay by 20 percent.

When the reality of the impact COVID had begun to settle in, everything changed.

Recognizing that traditional products weren’t what customers were looking for at the moment, the company began to design and manufacture a whole new line of products within a two-month span. Leadership took a hard look at what Anchor was doing and knew their business model needed to change to stay relevant with the new restrictions at the state and federal levels.

Anchor began connecting with customers to share the news the company could now provide fabric barriers, tents, and other new products to keep employees and their customer-base safe during the pandemic.

The idea worked — when the numbers came in, Mogavero says it ended up being the best fourth quarter Anchor ever had in the history of the company. The massive turnaround was really something the company did not see coming. 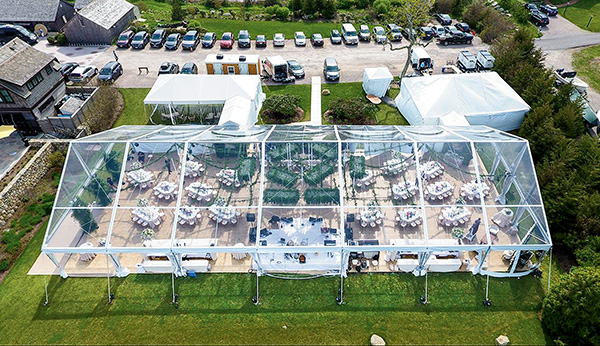 “That opened up so many avenues for us and for our customers nationwide,” says Mogavero Schmitt. “It was almost like everyone woke up in the middle of June and decided they needed a tent.”

With such a massive spike in sales, Anchor is projecting to end the year within 4 percent of what the company made last year, which also was a record year for them.

“Relationships that we’ve built and the quality and pride we take in our products really shines through and that has helped us to maintain a very good reputation in several of our markets,” says Mogavero Schmitt.

Those relationships expand beyond just sales and products, however. Anchor also is heavily involved in the community, working with the Southwestern Indiana Chamber of Commerce and participating in United Way campaigns for nearly 10 years.

Mogavero Schmitt says it’s the relationships they’ve built with their customers and their staff that have helped them have so much success for more than 100 years.

“We care about people outside of our walls,” she says. “I think our team members recognize and appreciate that.”