Decades ago, Evansville probably would have called itself a meat-and-potatoes city. Not anymore. These days, families and friends gather for sushi on birthdays and Chinese buffets on anniversaries. They eat kimchi before seeing the IceMen play at the Ford Center. They meet dates for Phad Thai. And they shop in local Asian markets, where it’s common to find new, untried foods and ingredients. Here is a list of six diverse dishes that give a taste of how varied our city has become:

Fusion sushi rolls like Roppongi Japanese Steak & Sushi’s Crunch Munch — a blend of spicy crab meat, crunchy fried flour, rice, and a sweet eel sauce — are just a sampling of what many Americans these days refer to as sushi.

Yet the concept of sushi has evolved over the years, and there are many types. A Chinese dictionary from the 4th century has one of the first written references to this dish, which at that time described salted fish being placed in cooked rice, according to PBS Food. Much later, fermented rice was used as a fish preservative, slowing the bacterial growth in fish.

The idea of sushi was likely introduced to Japan in the 9th century. As time went on, it took less and less time to prepare the fish that was served as sushi. These days, the fish is so fresh that it doesn’t need to be fermented or preserved, but it can be. Nigiri (hand-formed) sushi is vinegared rice with a slice of fresh, raw, unfermented fish on top of it. Maki sushi is typically wrapped in seaweed, and it doesn’t have to include raw fish — hence the Crunch Munch at Roppongi, 7221 E. Indiana St. 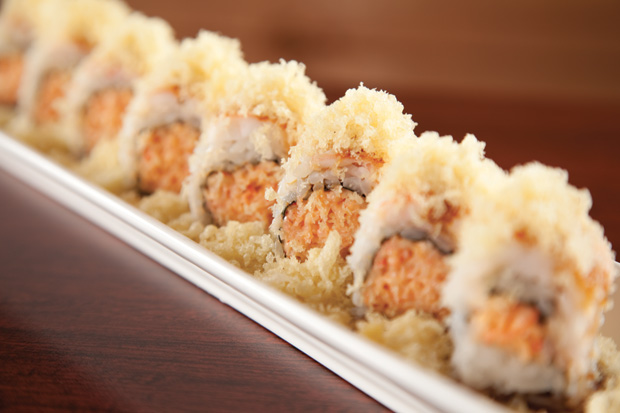 It’s not Mongolian. Neither is it barbecue. Yet Charlie’s Mongolian BBQ remains a mainstay of the North Side — for good reason.

Hungry customers flock to this 315 E. Diamond Ave. location to pile vegetables, noodles, and thin strips of chicken, pork, and beef on their plates. Seafood lovers enjoy the selection of shrimp, squid, and scallops. And when they finally arrive at the hot iron griddle, diners are greeted with a question: How hot do you want it to be?

As tasty as Charlie’s plates are, it’s the style in which they are cooked, and not the flavor, that makes them Mongolian barbecue. Mongolian barbecue describes a cooking process where meats and vegetables are mixed with oils, wines, and sauces and then stir fried over a large, round, and solid griddle. Barry Popik, an editor of the Oxford Companion to American Food and Drink and an expert on the etymology of many food terms, says Mongolian barbecue is actually the same as Japanese teppanyaki. Teppan means iron plate, and yaki means fried or boiled. The origin is murky, but one version is that Teppanyaki cooking entered Japan in 1945 and was popularized by Benihana, a restaurant chain that originated in New York. 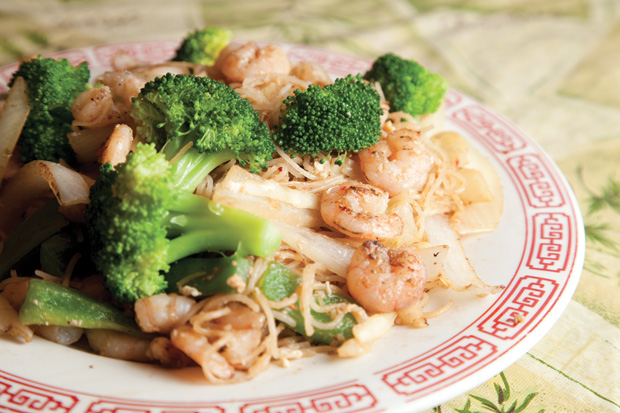 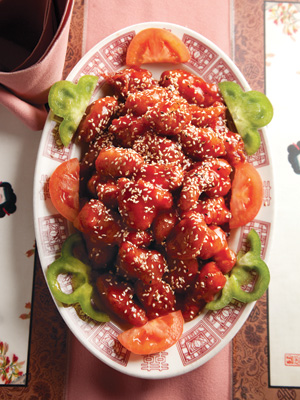 Shing-Lee Chinese Restaurant, a Downtown staple at 215 Main St. for more than 40 years, serves Cantonese cuisine, which comes from the Guangdong province (the most populous province in China). One of China’s eight culinary traditions, Cantonese food is known for tasting light, crisp, and fresh. Chefs usually incorporate techniques such as roasting, stir-frying, sautéing, deep-frying, braising, stewing, and steaming to prepare ingredients. Presentation is very important as well, so chefs always make sure their meals are aesthetically pleasing.

At Shing-Lee, the sesame chicken is a customer favorite. The chicken itself is tender and perfectly fried, slathered with a sweet, reddish-brown sauce and is served piping hot alongside a mound of scrumptious fried rice. Sesame seeds are sprinkled liberally on top of the chicken (hence the name).

“A man can live without a wife, but not without kimchi.” That’s an old Korean saying as quoted in Authentic Recipes from Korea: 63 Simple and Delicious Recipes From the Land of the Morning Calm by David Clive Price, Masano Kawana, et. al. Kimchi is a type of fermented vegetable — cabbage or radishes, for instance — that is oftentimes buried in the ground in clay pots. It is also usually served cold.

There are many different recipes for this famous Korean appetizer. Jaya’s Authentic Foods, 119 SE 4th St., prepares a version that is made with cabbage, onion, turnips, ginger, garlic, red pepper, salt, sugar, and anchovy liquor. Kimchi also happens to be healthy. A 2011 study published in Nutrition Research found that it can reduce body weight and improve blood pressure. 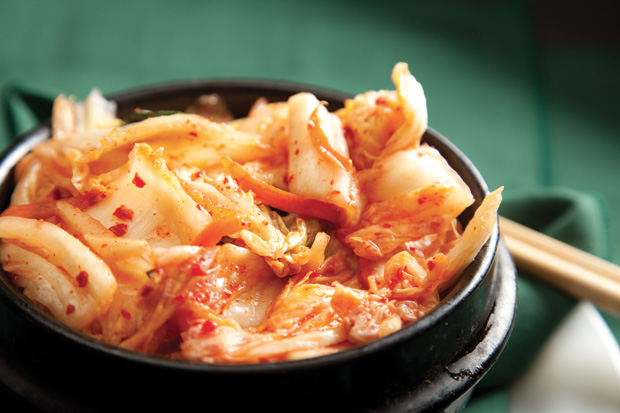 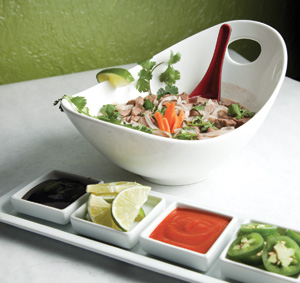 Kanpai, 4593 Washington Ave., serves this Pho beef soup with beef broth, chewy noodles, and chunks of beef. Pho noodle soup developed in northern Vietnam in the 1800s after the country was colonized by the French. “When cows were slaughtered for beef, the local people picked up the parts that the French didn’t want to use,” says chef Andrea Nguyen, who was born in Vietnam but then fled to the United States when she was 7 years old. She later went to cooking school, wrote for Saveur magazine, and published her own cookbook, Into the Vietnamese Kitchen: Treasured Foodways, Modern Flavors.

American bowls of pho are about 30 percent bigger than what’s found at street side food carts in Vietnam, Nguyen adds on vietworldkitchen.typepad.com. American restaurants often also offer many options to personalize bowls of pho, from raw beef, to cooked beef, to meatballs, and more. That’s not the case in Vietnam, which has fewer meat options than in the United States.

Regardless of the options, this hot soup is only growing in popularity. As chef Mai Pham told Nguyen in a story Nguyen wrote for The San Jose Mercury News in 2004, “Visually, it’s easy to see. It’s not mysterious.”

Phad Thai may be the American symbol of Thai cuisine, but it’s not eaten that often in Thailand, says Thim Potchanant, who owns Thai Papaya, 6240C E. Virginia St., along with her husband, Joe. The ingredients to make Phad Thai are easier to find here in the United States, but they are not always available to chefs in Thailand. Still, Phad Thai gives the uninitiated a good sense of what Thai food can be: savory, sweet, sour, and spicy. This stir-fried dish of rice noodles, egg, sweet turnip, bean sprouts, a special sweet tamarind sauce, and either chicken, pork, beef, shrimp, or tofu is served with lime juice and peanuts on the side. It’s one of many different items on the Thai Papaya menu, which offers spicy dishes as well.

David Thompson, an Australian chef who owned a restaurant in Bangkok for years, wrote in his book Thai Food that Thai cooking is not an instant cuisine. “It needs the cook’s attention, it expects time and effort to be spent, and it requires honed skills, but it rewards with sensational tastes.” Thim Potchanant would agree. She puts her heart into her dishes, using recipes from her parents. 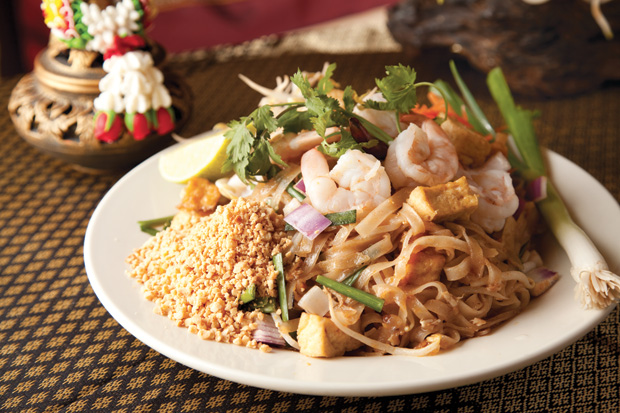 We purchased ingredients and other items for this story at Aihua Oriental Market, 1624 N. Green River Road, 479-7168. While not the only Asian market in Evansville, it offers a wide selection of fresh vegetables, dried peppers, fish, teas, and more from a variety of countries — not just those on the Pacific Rim. If cooking’s not your thing, though, try a night out at the various restaurants we feature here: