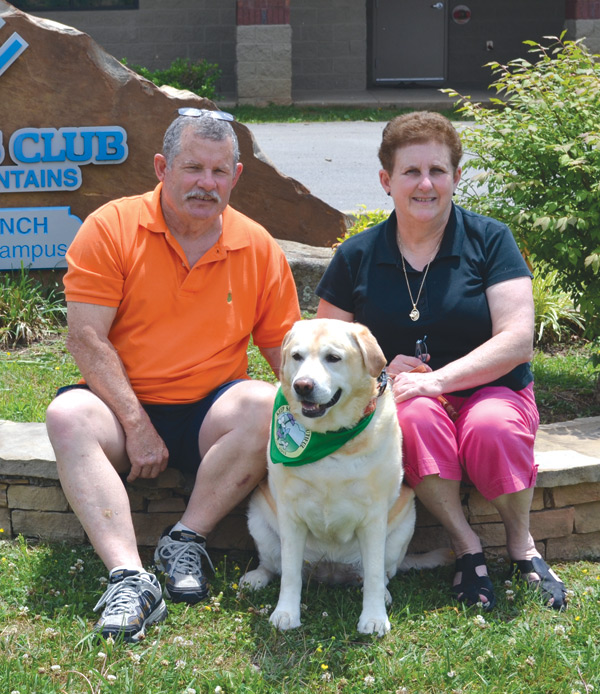 Evansville residents Steve and Susan Harp’s 8-year-old yellow Labrador retriever EVIE SUE often is seen snoozing during class presentations and events. But when she hears the magic words, “Do you want to see EVIE pick up litter?” she comes to life and the crowd goes wild with excitement.

EVIE SUE, which is a backronym for Every Volunteer is Essential and Shape up Evansville, visits area classrooms and other community events to promote anti-litter with the help of the Keep Evansville Beautiful staff and Steve. Susan goes along when she is not teaching in her own classroom at Dexter Elementary. EVIE has shared her environmental message with more than 60,000 children and adults at presentations in Indiana, Tennessee, Florida, and Washington, D.C. She also is an honorary Vanderburgh County Deputy Sheriff.

“EVIE’s ability to convince people to take care of the Earth is a special trait that has lasting effects. When she races to retrieve litter, people are in awe as she proudly brings the trash back to her bucket,” says Susan. “She leaves paw prints on the hearts of people she meets.”

The couple has been involved with Keep Evansville Beautiful since 2000, and in 2004, they attended a Regional Neighborhood Network Conference in Columbus, Ohio, and learned about the success of Ohio’s anti-litter program with a costumed mascot.

As the couple traveled home from the conference, they tossed around the idea of using a mascot in Susan’s classroom — a stuffed Yellow Labrador puppet named after Evansville.

Three years later, after Susan wrote the first book about EVIE, “Retrieving with EVIE,” published by M.T. Publishing in Evansville, the two decided to use a real dog as the mascot for Keep Evansville Beautiful.

“We knew the power of dogs through our many years of training and showing yellow Labradors at American Kennel Club sanctioned events,” says Susan.
In 2007, the Harps adopted a Canadian-born yellow Labrador retriever, named Asklar Corhampton’s Clean Sweep, or EVIE SUE. Steve trained the dog to pick up litter in just two days.

EVIE’s visits to classrooms and events consist of reading her book, showing her DVD from a partnership with WNIN about litter, singing EVIE’s litter song, taking EVIE’s pledge, and watching EVIE demonstrate how to retrieve litter.

“We are so proud to have EVIE as our mascot at KEB,” says Julie Welch, executive director at Keep Evansville Beautiful. “She inspires thousands of children each year to think about our environment through anti-littering and recycling. Even kids in high school have told us what an impact she had on them when they were in kindergarten or first grade. We are so grateful for her and her parents, Steve and Susan Harp, who are tremendous advocates for our city.”