The First Day of Forever 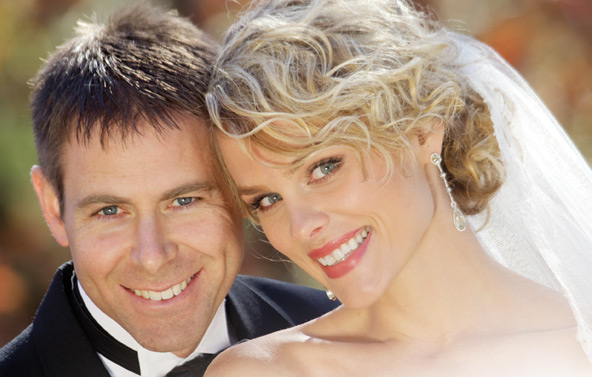 Three recently married couples offer inspiration for the perfect day — and a peek inside their wedding albums.

How they met
As students at Indiana University, then through Best Home Furnishings, a Ferdinand, Ind., company owned by Lacey’s family where Eric works in advertising.

Their vision
An elegant affair with a vintage feel and plenty of tributes to family traditions. The couple married in the same small-town Catholic church as Lacey’s parents, where her grandparents also recently celebrated their 50th anniversary. The wedding party traveled between sites in a caravan of vintage automobiles, and during the reception, the couple used Lacey’s parents’ cake topper and Eric’s parents’ cake knife.

Personal touch
Lacey works as a photographer, so the Vollmers rented a photobooth for the reception. Guests entertained themselves by taking pictures both silly and sweet.

Most memorable moment
The quiet, private time Lacey and Eric shared before the ceremony. “We had all the hustle and bustle of getting ready,” she recalls, “and it was really laid-back and special.”

Married August 12, 2006, at Montage with a reception at The Columbia Club (both in Indianapolis)

How they met
Former Newburgh resident Ashweena, now a pediatrician and assistant professor in medicine at Michigan State University, met Rama, now an associate professor of electrical engineering at Michigan State University, through their families. The introduction was what Ashweena calls a “more modern” version of an Indian arranged marriage — “it’s not like I didn’t have a choice,” she says. The couple met two days before Christmas 2005 and immediately clicked.

Their vision
A formal Indian wedding, which included a three-hour ceremony and hundreds of flowers in the traditional red and white wedding colors. Since the bride and groom both were raised in the United States, their non-Indian friends made up approximately half of the crowd. A program explained the significance of each event.

Most memorable moment
At the reception, two family friends performed a lively Bhangra dance. “It riled up the whole crowd and set the mood for a fun party,” Ashweena says.

Toni and Ken Tadlock of Evansville

Married April 5, 2008, at Neu Chapel on the University of Evansville campus with a reception at Paradise Pavilion in Newburgh

How they met
On the job at ThyssenKrupp Elevator, where Ken is a mechanic and Toni formerly worked as a sales representative.

Their vision
Since the wedding was Ken’s second and the couple was older when they tied the knot, they opted for a small, intimate ceremony followed by a blowout bash with live music by The Pits, a popular Evansville band playing rock music from the 1950s and ’60s.

Most memorable moment
Celebrating with family members including Ken’s father and sister, who traveled from Texas, and Toni’s 93-year-old grandmother, who passed away four months after the wedding. “We wanted people there that we truly loved,” Toni says. “That was very meaningful to us.”

•  Peas in an iPod – How two self-professed geeks planned an offbeat wedding
•  A Groom’s Guide to Weddings – What advice is there for the first day?
•  Picture Perfect – Saying cheese on the big day begins with engagement photos