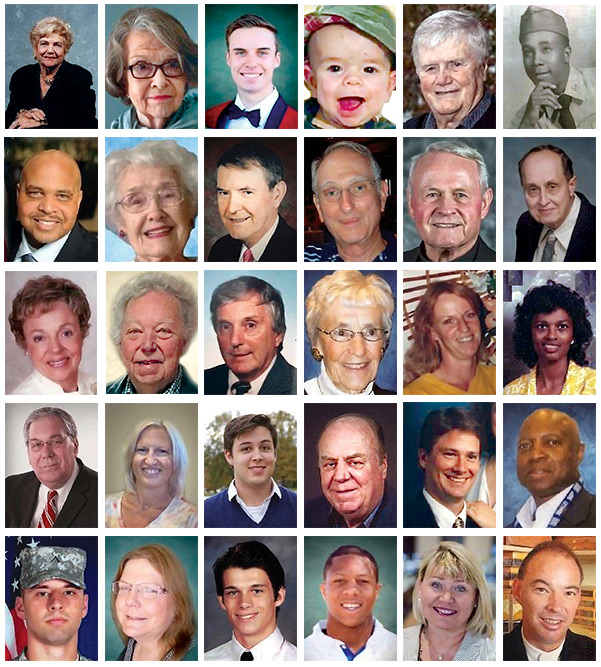 With each passing year, we mourn and celebrate the lives lost of members of the community who made a difference in their places of work, to civic organizations, and to their families and others. We pored through death records and obituaries to find notable men and women who helped shape the Tri-State through their contributions.

Misty battled cancer for six years, all the while staying dedicated to her work as an office manager at Tri-State Ophthalmology, where she worked for 35 years, and devoted to her friends and family. She radiated positivity and strength and always will be remembered for her quick wit, utter altruism, and kind and loving spirit.

Known as “Dot,” Dorothy was a seamstress who created all her clothes and most of her daughter’s. Dot’s outfits were known for making a statement, “a vision of a New York lady on the Evansville scene.” An Evansville native, friends and family describe her as a strong, independent, and courageous woman who lived her life with zest and enthusiasm.

Always known for her fashionable style, Marion was a former model for DeJong’s and Stewart’s department stores. A Newburgh, Indiana, native, she retired from Bootz Manufacturing after 14 years.

An U.S. Air Force veteran of the Korean War, Charles was known as a good cook with a specialty of barbecue. In his younger years, he was a pitcher for the Evansville Tigers, the local African-American semi-professional baseball team.

A graduate of North High School and the Early College program through Ivy Tech Community College, Nicolas had a love of music and video games. Friends and family knew him as a very generous and caring person.

Eugene was a former member of the Fine, Hatfield, Sparrenberger and Fine law firm, which he retired from in 1984. A graduate of Indiana University Business School and Law School, he was a member of the Adath B’Nai Israel Temple and former president of the Washington Avenue Temple and Temple Adath Israel.

Andrew was a member of the U.S. Army for 31 years and also served on the House Committee Chair at the Art Fellwock VFW 1114. He was known for mentoring and training soldiers and was affectionately called Uncle Forrest. He enjoyed dancing, traveling, and being with family and friends.

An Evansville native, Marchelle worked as a plant operator at Alcoa for more than 20 years. She also was a member of the plant’s fire department, where she earned awards recognizing her service to the community during the November 2005 tornado. Marchelle also was known for her work with area 4-Hers as assistant superintendent of poultry.

Cash loved to giggle, smile, and snuggle. Through his battle with a congenital heart defect, Cash made a lasting impression on anyone who met him and amassed a large fan club who followed his journey.

Known for his customer relationships, Bill’s skills in telecommunications saw him through a lengthy career with MCI, AT&T, and WOW before he founded McCormick Communications. He also had owned Wilbur’s Fine Cigars and said it had to be the “greatest job ever.” A graduate of Castle High School, Bill enjoyed the lifelong friends he made in Newburgh, Indiana and later his adopted West Side. “No fun.”

Jerry was the founder and owner of the iconic Evansville restaurant Turoni’s Pizza, which he began in 1964 on North Main Street. Over the years, he expanded the business to locations on the East Side and in Newburgh, Indiana. In 1996, he and his wife Judie added a microbrewery to Turoni’s. Jerry also had a passion for antiques and traveled the U.S. to many markets in search of unique additions to his restaurants.

Paul’s love of movies and the theater business began with his job as a manager at Loew’s Majestic Theatre and later the Victory Theatre. He would later purchase the Victory and open North Park Cinemas. Eventually his theater business would evolve into Showplace Cinemas, featuring eight locations in the Tri-State.

While attending first grade at Evansville’s Stanley Hall Grade School, Anita announced she wanted to be an artist; it was a declaration she pursued through her time at Indiana University and career in New York City. With her degree in Fine Arts, Anita became an accomplished textbook designer, photo researcher, and book editor. For 16 months in New York, she also worked for Marvel Comics.

Bill loved Evansville and was the creator and founder of the well-known EvansvilleWatch social media site, which he established in August 2009. He especially was fond of monitoring local scanners for traffic and weather. In 2015, EvansvilleWatch was voted Best Twitter Account by Evansville Living readers; he received many other awards for his efforts as well. “Our Batman will continue to watch over our Gotham.”

A graduate of the Kentucky Military Institute, Mark began his career in the Vanderburgh County Prosecuting Attorney’s Office. He was an important part of the Drug and Alcohol Deferral Service program. Mark also held the office of County Commission and served two terms on the Evansville City Council. Through his life, he worked on many campaigns and boards throughout the area.

A well-known anesthesiologist, Dr. Drake’s experiences and service in a Mobile Army Surgical Hospital in South Korea provided inspiration for the novel, movie, and long-running TV series M*A*S*H. After his service, Dale and his wife Cathy returned to Evansville where Dale accepted a position at St. Mary’s Hospital (now St. Vincent’s Evansville) — he ultimately would be named chief of anesthesia and practiced until 1985. He continued to practice at Evansville Surgery Center until his retirement in 1997.

A Henderson, Kentucky, native, Herman worked at his father’s furniture store, Alles Brothers Furniture, when he was young. After serving in World War II, he returned to Henderson to run the store. Besides the furniture business, Herman was known for his love of flowers, gardening, and farming.

Following his retirement from Chrysler, Ken and his wife Leanna invested in one of the cornerstone buildings of historic downtown Newburgh, Indiana, beginning the Sprinklesburg Village shop. The couple would later own The Exchange Hotel building on the opposite downtown corner, where Ken operated River Town Antique Mall. Ken also served on many Newburgh boards and on the Town Council. Through the years, Ken was the “chief fish-cooker” at the Newburgh Fiddler Fest and “the old coot” during the HNI Ghost Walks.

A graduate of Harrison High School — where he played football and wrestled — TaRhel enjoyed being outdoors and loved his cars. He worked in production at Berry Plastics and at Krispy Kreme during his high school years.

roud active veteran. He loved people and life and was devoted to his family. Shaun was a member of the Sterling Men’s Club, where he could often be found helping man the grills at the infamous Sterling Men’s Barbeques on Saturdays.

A physical education teacher at Reitz High School, Louise coached women’s tennis, basketball, and track. In 1981, her girl’s basketball team won the state championship. Louise was a pioneer in women’s sports and a legendary tennis player.

Tyna was the co-owner of The Diamond Galleria and was known not only for her passion for the jewelry industry, but for the contributions she and her husband Bert have made to the community through their business. Outside of her work, Tyna enjoyed spending time with her family.

A sophomore at Mater Dei High School, Tanner was a part of the school’s track team and enjoyed video games and music. He was very artistic and loved to draw, but his greatest joy was spending time with friends and family, especially jet skiing with his father.

Jane was dedicated to many area organizations and was involved with the restoration of the Schnee Ribeyre Elliott House in historic New Harmony, Indiana. She also was a lifetime member of the University of Southern Indiana/New Harmony Board of Directors. Jane was proud of her deep Indiana roots — her great-great-great-grandfather was a member of the Robert Owen Society, which arrived in the state in 1824. Her family was her life — she was known to love unconditionally and was a source of encouragement, generosity, and joy.

Hailing from a family of singers, musicians, and teachers, Susie was an accomplished musician in her own right. In 1987, she wrote “Here in Evansville” to celebrate the 175th anniversary of the city’s founding. She also composed a theme song for the University of Evansville — “Basketball Fan” — which was inspired by her time as the “Purple Aces Lady.”

Camden was a recent graduate of F.J. Reitz High School, where he was a two-year starter for the school’s varsity baseball team. He also participated in freshman basketball while in school, but baseball was his passion and he played for numerous teams during his career. Camden was a member of the National Honor Society and enjoyed his time with family and friends.

A longtime West Side barber, Eddie opened his first barbershop in the Howell neighborhood in 1965 and continued Eddie’s Barber and Beauty Shop for more than 50 years. He also was an IHSAA umpire and helped run the Evansville Baseball Umpires Association.

A resident of Mount Vernon, Indiana, Alice was a painter, having studied and graduated from the New York School of Design. Her work was seen in numerous condominium projects and shopping centers in Florida. She and her husband Bob renovated and ran the River House in Evansville. Alice enjoyed working with Operation City Beautiful in Evansville and the city museum. She also shopped for orphaned children each Christmas.

An Evansville native, Drew graduated from North High School and attended the University of Southern Indiana and Indiana University Purdue University Indianapolis before enlisting in the U.S. Army in 2015. Drew was a proud Hoosier and his greatest joy came from his family, especially his son Jack.

Father Kenneth was born in Warrick County and was ordained to priesthood in 1968. He celebrated his 50th jubilee as a priest in 2018. Father Kenneth served many parishes and schools in the Tri-State, including St. Joseph, St. Agnes, Good Shepherd, St. John the Apostle, and St. Boniface parishes and Reitz Memorial and Mater Dei high schools.