The Merchants of Vintage 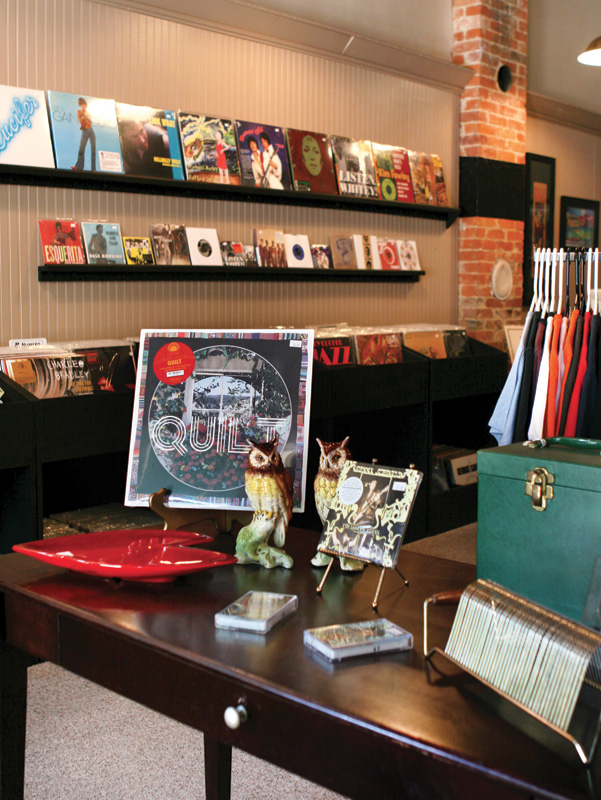 Color and history paint the inside of Heirloom Records & Vintage. On one wall you’ll find a rare James Brown vinyl and a stack of The Talking Heads’ cassette tapes no one ever listened to. Paisley 60s skirts, trendy ties, generation-old leather shoes, and racks of clothing fill the middle, and treasures as quaint as an eggshell blue Eskimo fan line a bookshelf.

From selling vinyl out of a milk crate to a classy storefront on Franklin Street, John Bugg has become a local LP (long play) guru for his successful niche business, Heirloom Records & Vintage. Partnered with Kristen Gubbins, who has been selling vintage clothing and items on her virtual storefront, The Robot Parade, for more than a decade on eBay and Etsy, Bugg’s milk crates have turned into a full-scale pick and sell operation.

Bugg always has been a collector, but it got to the point where his vinyl took up too much room. He shared a table at the Merchant Mall, and once he got over the hard, first-sell nostalgia collectors have to overcome, his milk crates began multiplying. “It’s true that it’s hard to sell pieces of your collection off,” Gubbins says. “But you’re always going to find something to fill it up again.”

Gubbins has been picking old clothing, costumes, and other treasures for years, but, like Bugg, her house became too cramped with The Robot Parade’s merchandise that she started selling it at the Merchant Mall. They met there, and discussed the possibility of opening a store to sell his vinyl and her vintage. When the mall closed in June, their speculations became reality. Bugg found a storefront at 2023 Franklin St., across from the West Branch Library, and within 30 days — with no business plan or major investments — they celebrated Heirloom Records & Vintage’s grand opening on July 7.

Utilizing social media to correspond with other record enthusiasts, Bugg acts as an experienced middleman, going out five times a week looking for records. “It takes time, because I curate what I’m selling more than chain record stores,” he says. Recently, Bugg found a Nat Riggins “Keep on Doing what You’re Doing,” private pressed, $1 record he is hoping to sell on eBay for $275, because there isn’t always a market for certain LPs in Evansville. “Big DJs on either coast like to have them, just for that little bit of sound between tracks,” he says. And now with a storefront, he can build relationships with other collectors. Gubbins says she once found a dumpster-condition Eames designer chair being used to seat a drip bucket, one she hopes to sell for $300.

Gubbins continues to maintain her online outlets, and Bugg utilizes Facebook to share records that he finds. They direct their business mostly to a younger clientele interested in vintage, or the seasoned collector looking for that rare Lightnin’ Slim blues record.

Bugg and Gubbins’ mash-up of ideas weren’t too far apart: they both love collecting things, and why not make money from what you love?