The Name Behind The Corner

If you’ve ever strolled through the artsy Downtown district of Haynie’s Corner and wondered how it got its name, a new history display has the answer.

A locally curated collection of historic newspaper articles and black-and-white photographs details the man behind the cultural neighborhood’s name: George Washington Haynie, a longtime local drug store owner and Evansville public servant from the late 1800s through the 1920s. Throughout the summer, the exhibit is free for public view in the glass cases on the façade of the Alhambra Theatre, 50 Adams Ave. in Haynie’s Corner at the iconic intersection of Second Street and Adams Avenue.

“Haynie’s Corner is such an important place,” says Greene. “And George Washington Haynie was a much beloved man.”

Haynie (1857-1939) was a well-known and respected business owner, public servant, and family man, explains Greene. In addition to running his drug store from the late 1800s to 1928, he served as the commissioner of police, a board member of water works and safety, and president of the Indiana Druggist Association. President Grover Cleveland even appointed Haynie as surveyor of customs for the city. The local leader also was dubbed with the unique nickname, “Mayor of Goosetown,” in reference to the neighborhood’s large population of geese.

Haynie’s drug store was situated on the first floor of a Second Street building designed by Weiss & Harris Architects, with his family home on the second floor above, where he lived with his wife Emma and their son Gilmore. Neighbors became Haynie’s longtime customers, calling him by name, and vice versa. But after his retirement in 1928, he sold the business to fellow Evansville druggist H.A. Woods, and the store was destroyed twice: once by the Ohio River Valley Flood in 1937 and then by a fire in 1944.

In addition to the history display, a plaque in Haynie’s honor was installed in Haynie’s Corner in a ceremony officiated by Evansville Mayor Lloyd Winnecke in May.

Today, Greene believes Haynie would be proud Haynie’s Corner is a family-friendly business and arts district, with hip local eateries and eclectic events, from First Fridays art and music fests to the Funk in the City arts and crafts fair.

“It’s important to remind people how an area can change, and how it takes the community to keep it alive and moving forward,” she says. “No one has worked harder to bring back a neighborhood than the people of Haynie’s Corner.” 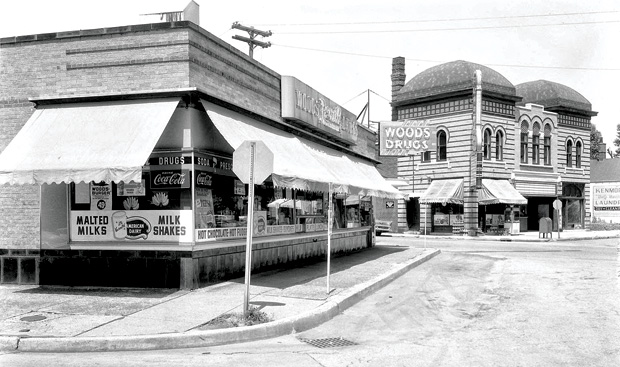 ▲ Above, a historic photo of Haynie’s Corner, which appears in an exhibit currently featured in the glass cases of the façade of the Alhambra Theatre. The theater can be seen to the right in the photo along with Woods Drug Store, formerly Haynie’s Drug Store owned by George Washington Haynie. Photo from from the Thomas Mueller collection at the David L. Rice Library.

For more information about Haynie’s Corner, call 812-431-3835 or visit hayniescorner.com.