The Office of Business Leadership 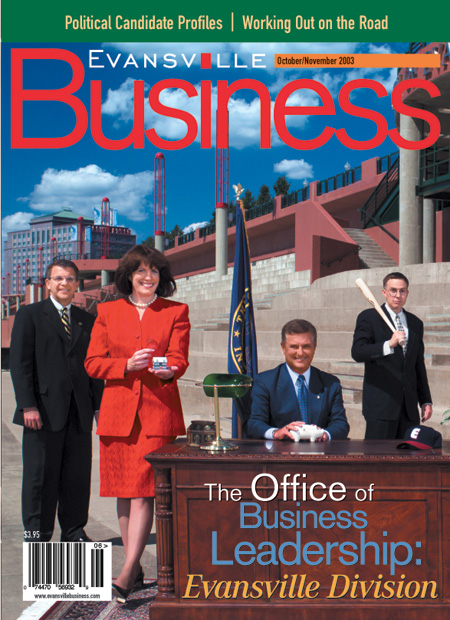 Ten years ago, we hauled a desk and the trappings of an office to Dress Plaza to stage the October/November 2003 issue of Evansville Business — The Office of Business Leadership: Evansville Division. The gatefold cover and story featured nine leaders who shared their ideologies. Ten years down the road, let’s look at where these leaders are today.

1. Lloyd Winnecke was a County Councilman and bank vice president and marketing director who envisioned an Evansville with a can-do attitude. “We need more people involved in government who want to roll up their sleeves and figure out how projects can be accomplished,” Winnecke told us. Today, Winnecke is mayor of Evansville; he is in the second year of his four-year term.

2. Cheryl Musgrave was Vanderburgh County Assessor who brought the records of the office to the Internet. “The focus is to help Evansville and Vanderburgh Country grow,” she told us. Musgrave left Evansville for 18 months in 2007 to serve as commissioner of Indiana Department of Local Government Finance, where she worked with Gov. Mitch Daniels on the state’s property tax restructuring. Today, Musgrave is back in Evansville running her own tax consulting firm.

3. Mike Hinton was President and Chief Operating Officer of Old National Bancorp when he told us, “It would be wonderful to see … more private and public investment so that Evansville’s central business district could realize its potential ….” Hinton resigned his position at Old National Bank in 2006 and today serves as President at Bernardin, Lochmueller & Associates Inc., a full-service survey, planning, engineering, and environmental firm.

4. William C. Bussing III, a lawyer and chairman and owner (with family) of the Evansville Otters, is doing the same work as he was 10 years ago and in 1995, when he and his family established the Frontier League franchise to play at historic Bosse Field. “It’s like hosting a party for up to 5,000 guests, 45 times a year,” Bussing told us.

5. Dan Schenk, Chancellor at Ivy Tech State College, continues in the role for which we profiled him. In 2003, he told us long-term goals included completing the campus expansion of Ivy Tech Community College-Southwest. Schenk was featured on the cover of Evansville Business in the April/May 2013 issue.

6. Marjorie Soyuenc, Executive Director of the Welborn Foundation Inc., spoke to us about the foundation’s work to partner with community organizations to impact Evansville’s education, health care, and social environment. Soyugenc died Nov. 28, 2012. Under her stewardship, the Welborn Foundation awarded more than 400 grants totaling more than $24 million to primarily nonprofit organizations connected to health care.

7. Adrian Brooks, Pastor, Memorial Baptist Church, continues today to serve the large church near Downtown. He also serves as president of the Evansville Police Department Police Merit Commission. Brooks was a staunch opponent of city-county reorganization (which failed at the ballot in 2012) and recently he spoke out regarding a controversial traffic stop involving an Evansville firefighter and a member of his church.

8. Marilee Fowler, Executive Director of the Evansville Convention & Visitors Bureau, resigned her post in March 2010 amid controversy she was being forced out by CVB commissioners for talking to the media about the sports complex she hoped to see built at Wesselman Park. Today, she continues to put heads in beds as President and CEO of the Cedar Rapids (Iowa) Area Convention & Visitors Bureau.

9. Jack Schriber, Supervisor of Fine Arts, Evansville Vanderburgh School Corp., retired in 2007, though he’s not slowed down. In 2010, he and his wife, Sue, were awarded Rotary’s Civic Award. Together, they have put their imprint on nearly every arts endeavor in the community. “I try to lead by example,” Schriber told us.