The SKI to my Heart 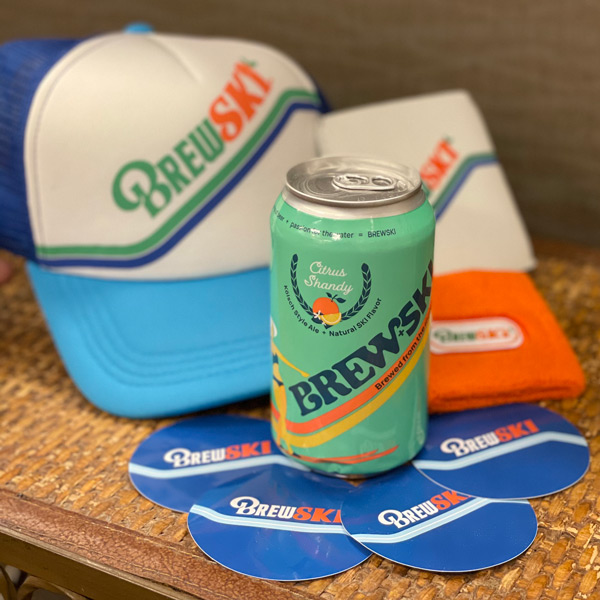 Last week, a plain cardboard box addressed to Evansville Living Editor and Publisher Kristen Tucker was delivered to our office. The branded contents — including two orange wristbands and a bright blue hat that I’m wearing as I type this — came from BREWSKI, a traditional shandy from the Double Cola Company subsidiary Cheers Beverages.

The two 12-ounce, 3.5 percent ABV cans (along with matching koozies and stickers) in our package were first unveiled in 2019 but made their debut in southern Indiana on Aug. 10, 2021.

But why should Evansville be excited about the turquoise canned beer brewed by Big Kettle Brewing in Lawrenceville, Georgia? (Other than providing me with an afternoon of entertainment trying on all of the swag).

The clues are in the name: “brew” and “ski.” The citrus shandy — a beer mixed with a nonalcoholic drink — is 50 percent Kölsch-style ale and 50 percent SKI Citrus Soda.

As an Evansville transplant, I never came to love the taste of SKI that true Evansvillians seem addicted to, nor am I the first in line to order a beer, typically opting for a cider if cocktails aren’t available. But BREWSKI may mark a turning point in my drinking preferences.

The crisp brew is light in both color and taste, yet it doesn’t sacrifice flavor. Met first by a sour fizz and then calmed with a sweet burst of citrus, my taste buds continued to tingle as word of my new accessories and the BREWSKI’s flavor spread around our office.

“It’s light, like a summer shandy or a radler, but even more subtle,” says Managing Editor Jodi Keen. “The citrus flavor hits right on the heels of the hops, mellowing the slightly sour aspect and giving it a more refreshing aftertaste. It’s a good brew for people who are warming up to beer but haven’t fully embraced it. The mix with Ski makes the difference.”

BREWSKI is the first in a line of adult beverages to be unveiled by Double Cola throughout the year. Tri-State residents can find the beer in local Liquor Lockers, Schnucks, and more with BREWSKI’s store locator.

As for the merchandise — we’re keeping the new gear all to ourselves.