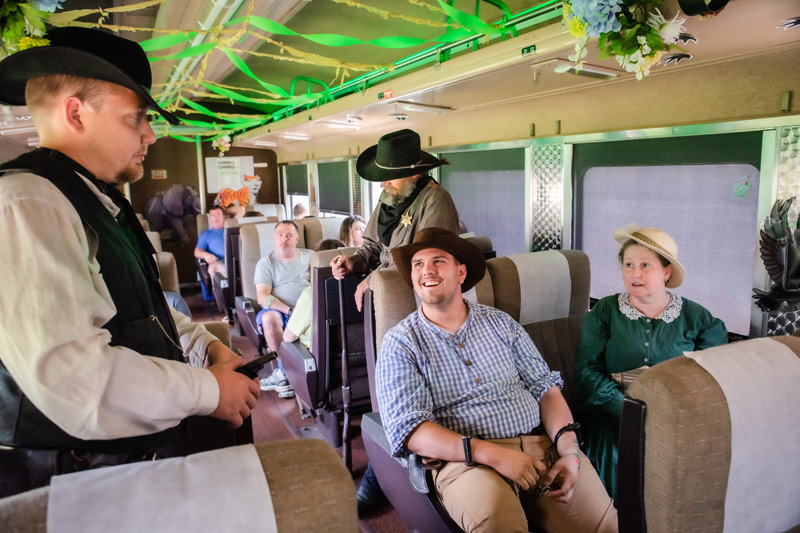 Swaying from side to side like the controlled motion of a pendulum, the Ohio River Scenic Railway train peeled away from the Depot in Tell City, Indiana, as photographer Audra Straw and I watched the small town outside start to blur into lush green foliage.

When we boarded the Outlaw Limited train for our story in the July/August 2021 issue of Evansville Living, we were eagerly anticipating the Wild West-themed experience. Actors with the Cowboy Posse, a volunteer reenactment group based out of LaGrange, Kentucky, portrayed townspeople, a sheriff and his deputies, and an unruly outlaw in handcuffs during the June trip.

While Audra and I stood to explore the train, as is encouraged by staff, the outlaw — played by Sterling Hargrove — begged fellow passengers for a key to his shackles. His pleas for help and the sheriff’s equally convincing reprimands echoed down the train as we stepped into the birthday car at the end of the train.

Dotted with happy birthday signs and colorful decor (although there wasn’t a reserved party on our trip), the art deco car maintained the same vintage feel as the rest of the train. 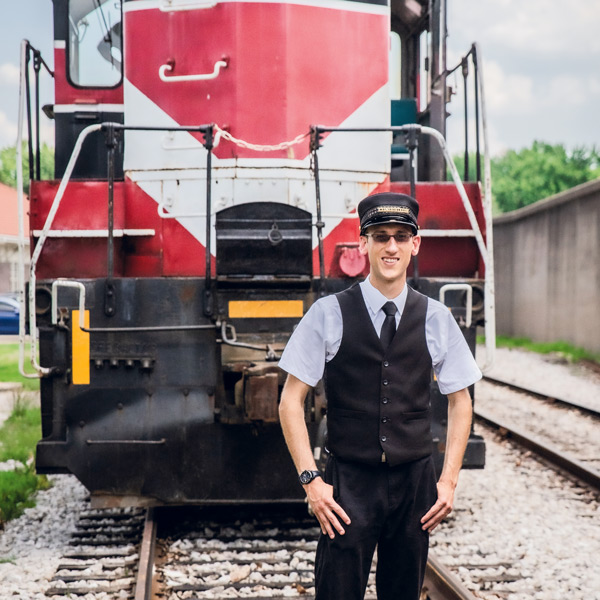 Built between 1949 and 1956, with the exception of one built in the 1980s, the passenger cars are driven by a 16-cylinder diesel electric engine. The “power plant on wheels,” as railway president Logan Day calls it, is housed in a GT-7 model locomotive manufactured in the mid-1950s by Electromotive Division for the Rock Island Railroad.

The stainless-steel exteriors and well-preserved furnishings of the cars made me feel nostalgic for a time I wasn’t alive to see: when the railroad was king of the travel industry. This brand of time travel wasn’t what Day had in mind when he founded the company in July 2019, but he says the response has been “rather great.”

“It’s a unique experience that throws you right back to what travel was like for most Americans up until the mid-1950s,” he says. “We generally see nothing but happy people walking away.”

Originally geared toward freight opportunities, this modern railway shifted focus to align with the Depot’s previous tenants and the Ohio River Scenic Railway’s nonprofit partner, The Scenic Lincoln Railway. In March 2020, the cars and locomotive were assembled and ready for operation, and then immediately stalled by COVID-19. When the first train finally launched on June 20, 2020, Day and his crew rolled into a new world of obstacles. 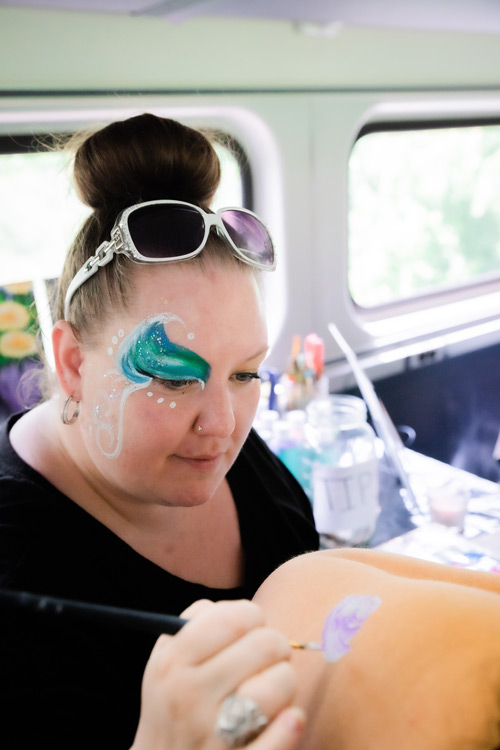 “We’re facing challenges we never expected when we started this business,” he says.

Artist Julie Durbin elaborated on some of these challenges, insisting that I receive a “face” painting while we talked. I rolled up my left sleeve and patted my bicep. Durbin asked me for my favorite color, and within the blink of an eye, purple flowers began appearing on my skin.

“We heard the train was struggling with COVID, and this is our best local tourist thing,” Durbin says, the point of her paintbrush dipping into green paint before she traced a leaf near my shoulder. “Their commitment inspired me. I wanted to help in the way that I could.”

Commitment is what drives Day. While Durbin donates her time, volunteering to paint faces and make balloon animals on some of the train rides, Day and the other owners have gone without pay in order to focus finances on the railway’s expenses.

“You’re committed to the vision,” he says. “You don’t get into it thinking you’ll get paid on day one. Really through the pandemic, we were very fortunate that people still came out and visited.”

A year since its inaugural ride, the train is still gaining steam, with tourists and local adventurers coming out to support it. As Audra and I settled back into our original car, Durbin’s glitter-coated flowers still damp on my arm, I noted some of the Cowboy Posse standing in the aisles; there was a head poking out of every seat in the car.

We reached the halfway point at Troy, Indiana, about five miles from the depot, when the train switches directions, and a startled cry followed by a bang made me jump. The car erupted into action: Someone had responded to the outlaw’s pleas, and he was free.

The struggle that followed involved undercover bad guys overthrowing the sheriff and robbing train passengers, “forcing” our money — which would be donated to St. Baldrick’s Foundation — into a burlap sack. Eventually the train stopped, and passengers were moved off the cars for a staged shoot-out, which the sheriff’s team wins. 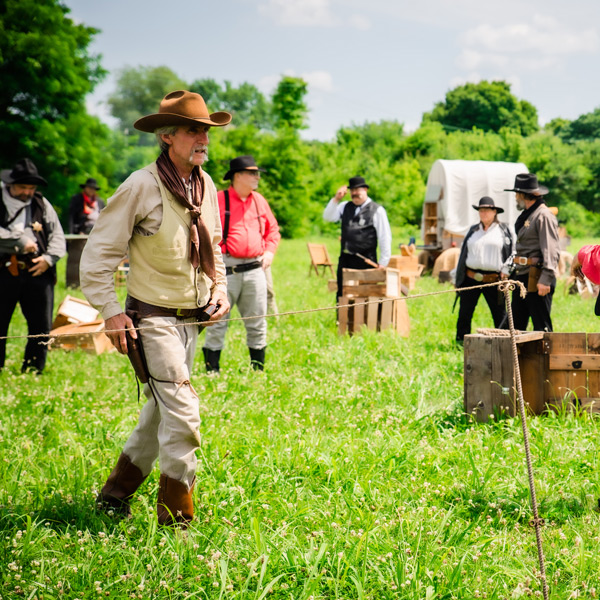 The Outlaw Limited train is one of the many themes offered. This summer, Day hosted a Fourth of July train with a private fireworks show and now looks forward to the holiday season featuring a pumpkin patch train, Halloween ride, Christmas trips with visits from Santa Claus, a Valentine’s Day dinner ride, and more.

“We’ve been really focusing on providing a family friendly, fun, unique experience,” says Day. “And I think we’re excelling in that. We just like to get the word out so that people know that this is something to do.”

Themed and non-themed rides — all in the central time zone — take place at 10 a.m. and 1 p.m., with Saturdays dinner service at 5 p.m. Tickets are $25 per person, and children 2 years and younger are admitted for free.