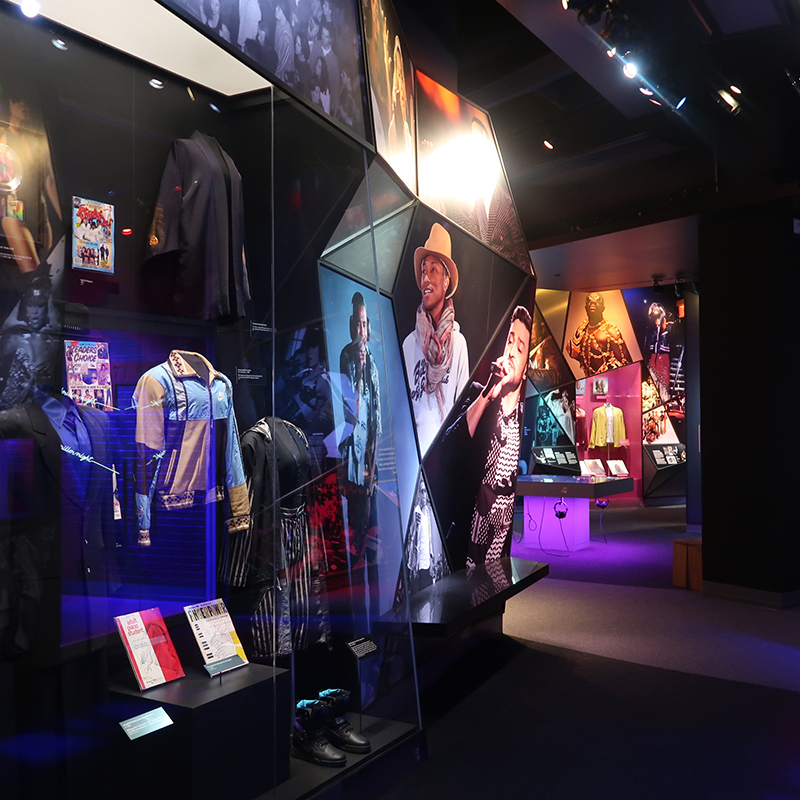 Nashville’s new National Museum of African American Music (NMAAM) is “Out of Sight” — at least James Brown seems to think so. The Godfather of Soul is larger than life in the Rivers of Rhythm Path, his perfectly-pompadoured image projected onto a panorama of screens as he belts out his 1960s hit and performs his trademark smooth, gliding footwork. The 1964 footage is from Brown’s first televised performance.

It’s one of several “takeover moments” that will wow visitors to the 56,000-square-foot museum that opened Jan. 30 in the heart of Music City’s tourist district.

Kick off your visit with a 15-minute orientation film in the Roots Theater that chronicles the 400-year evolution of Black music in America and documents how it branched off into dozens of genres that include gospel, jazz, blues, R&B, and more.

Then, stroll through six galleries organized by era and emphasize historical events, such as Reconstruction and the Great Migration, that influenced the creation of a variety of musical styles.

NMAAM is an in-depth musical history lesson, but it also is big on super-fun, interactive exhibits. Think you could be the next big record producer in the music biz? Try mixing your own beats in One Nation Under a Groove, the R&B gallery. If it’s been a minute since you busted a move, the dance studio offers a digital refresher course. A timeline of popular dances starting with the 1950s allows you to choose your decade. Those who came of age in the ‘90s can relive their club days with Montell Jordan’s “This is How We do It.” Just don’t embarrass your kids.

The Message gallery, a graffiti-covered recreation of the urban decay of the South Bronx of the 1970s, captures the zeitgeist of the birthplace of hip hop and rap. Black children from the blighted borough used music to rail against social injustices, speaking truth to power long before these genres were commercialized.

More than 1,500 artifacts are on view throughout the museum, so see if you can spot something that belonged to your favorite music artists. Special gems include a trumpet played by Louis Armstrong, a gown worn by Whitney Houston, and a Grammy awarded to the scat-singing Queen of Jazz, Ella Fitzgerald.

NMAAM may be the new kid on the block, but it has an old soul. The music that rose from centuries of African American struggle, oppression, joy, and triumph is now the soundtrack of the nation, and what better place to celebrate that legacy than Music City?

EXPERIENCE THE MUSIC
Admission: $13.50-$24.95
Address: 510 Broadway, Nashville, TN
Contact: 615-301-8724
Info: The museum is open only on Saturdays and Sundays throughout February. Due to the pandemic, it is operating at reduced capacity. Pre-purchased, time-slotted tickets are required.
Website: nmaam.org