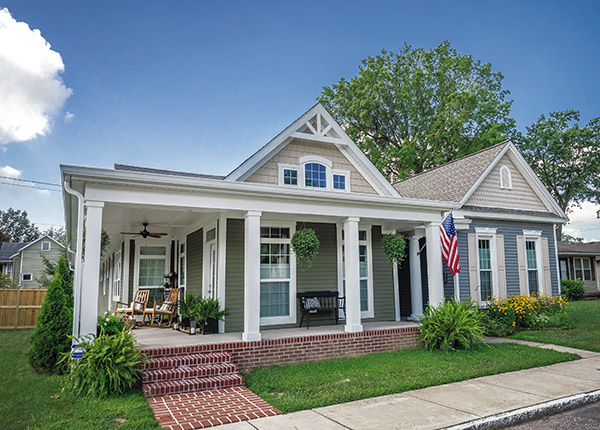 A package deal — when Jill and Tony Hall inquired about the identical homes along East Blackford Avenue in Haynie’s Corner that were for sale, they were told the two were being sold together.

“When we saw them, we started to talk about the thought of living in the Downtown area,” says Tony, an account executive with ONI Risk Partners.

After living many years in a home in the Lincolnshire neighborhood along College Highway, Jill and Tony thought it was time to downsize their living space. After all, their two children were grown and out of the house and the couple wanted to find something more suited to just the two of them.

“We’ve always thought it would be fun to live someplace where you can just walk to different restaurants, shops, and things,” says Jill, who is a real estate agent with Berkshire Hathaway. “And I felt we needed something different and unique when we did downsize.”

The two shotgun homes in Haynie’s Corner seemed to offer just that. With identical footprints, the couple fell for the curb appeal of the twin properties.

“We thought the concept of having two homes side by side would be perfect when our kids came to visit, providing them and us space during the visit,” says Tony. “The proximity of these homes being only a few feet apart was the perfect solution.” 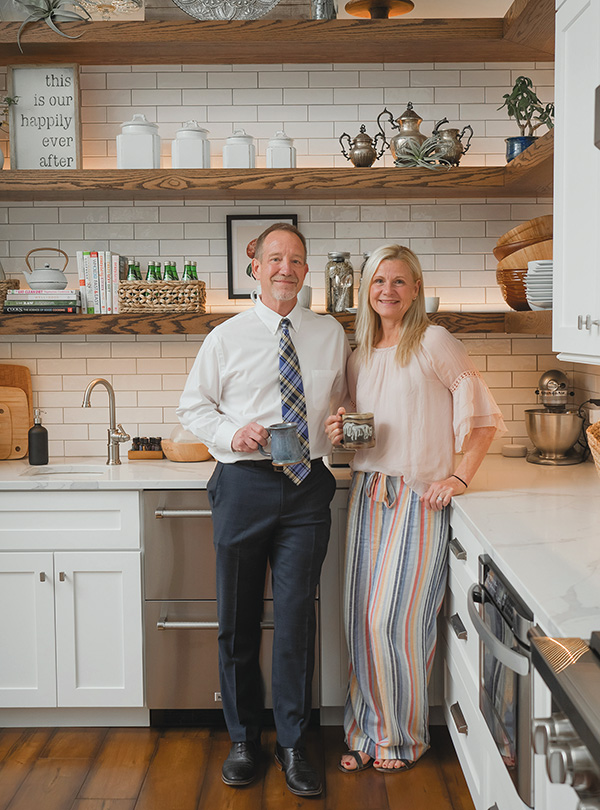 “We loved living at 31 but there were a few missing conveniences. As we started planning for the renovations, we thought of changes that would make the floor plan more attractive and the space more usable,” explains Tony. “We then did a pretty quick pivot and decided to make the home at 33 E. Blackford our new home.”

As inspections began, it became clear Haynie’s Too was going to have to become a clean slate.

“It was necessary in order to replace old rotten studs, the entire floor joist system, and other structural components,” says Tony. “We basically rebuilt the home, but kept many of the external wall studs and roofing system while building on an addition to the rear of the house.”

But renovating a home from scratch — even one that is only 1,200 square feet — brings its challenges. Jill and Tony knew they wanted Haynie’s Too to be the home they would spend the rest of their lives in, so they planned to make the home as close to perfect for them as possible with a deadline of Christmas 2018.

“It was a very stressful experience because we tried to do it so quickly,” says Jill. “But in the end, I feel like trying to do it so quickly actually paid off. We were fortunate enough to have everyone really working toward that goal.”

The couple credits their entire crew for the complete overhaul of Haynie’s Too — architect Pete McCullough helped them plan how to lay out the renovated spaces and general contractor Oleg Keksenko and his crew from D and J Complete Construction, LLC went above and beyond for the Halls.

Brent Memmer of Memmer Tile furnished the tile work including in the new open kitchen. Jeff Haury Jr., who worked late into the night on many occasions, installed new hardwood flooring throughout the home. Lighting was furnished from Illuminating Expressions and kitchen cabinetry and counter work completed by The Dream Shop. Tressa Stieler worked on the painting of the home, and the metal medallions denoting the homes’ names were furnished by Kyle Gabbard of Dynamic Fabrication, LLC.

The result of the work is a one-bedroom, one-and-a-half-bath home that draws on the southern Charleston style. Large windows in the living area, dining room, and master bedroom allow for large amounts of natural light to fill the space.

The vaulted ceilings — a result of removing the ceiling joists and exposing the rafters — expands the entire home’s feel (a suggestion from their inspector Rob Cahill). An open kitchen with a large island counter gives a perfect spot for entertaining.

The master suite includes a full bath along with a walk-in closet and a hidden cellar door. A pantry and laundry room sit just behind the kitchen. The new design also allowed for a cozy nook office for Jill. And though it was thought the front room’s fireplace could not be kept in its original state, the contractors were able to save it. The piece helped keep a historical element of the home, which was built in 1894.

“I love that it is very simple and easy — everything is so easy and compact,” says Jill of their finished Haynie’s Too.

“It’s been an eye-opener for sure, in many ways,” adds Tony.

While the home was not completely finished by Christmas 2018 (a few small touches remained), the crew was able to complete the home to a point where the family could share the holiday in the home.

“Then after the kids left, we moved back into Haynie’s Hangout so everything could be finished, then came back to Haynie’s Too for good in February,” says Tony. 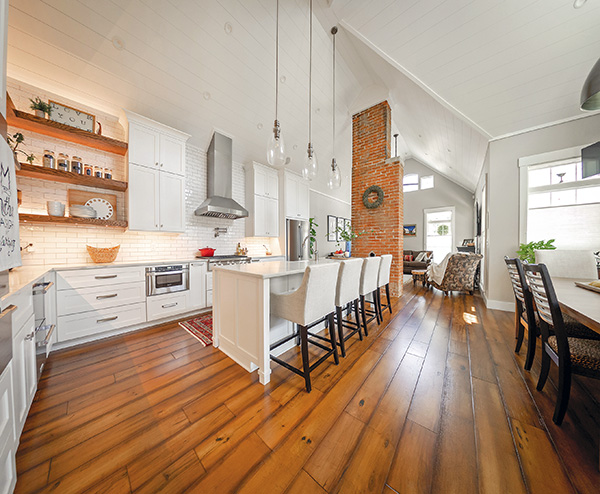 “It was so crazy, but it seemed like it would work and it would be perfect,” adds Jill. “And it really has worked the way we thought it would.”

Once they officially moved into the new house, it was time to make it a home. And for the interior design, Jill relied heavily on her daughter-in-law Abigail Hall. Abigail (“our southern belle,” says Jill) helped the couple add to their Charleston feel through décor choices and landscaping as well, even coming to Evansville from her home in Greenville, South Carolina, to help Jill finish the look.

“Interior design is just a passion that Abigail has and she worked very hard to help us,” she says. “It was a lot of fun and a great bonding experience for us.”

Far from neglected, the Haynie’s Hangout home has become a popular Airbnb spot. When their children are not visiting, Jill and Tony open the home to travelers and they are happy by the response.

Now that the year-and-a-half process is complete and their new home fitted to their liking, the couple feels all the work has paid off in spades.

“It’s very cozy and so comfortable,” says Tony. “Our neighbors are wonderful and Downtown is such an exciting place to live.”

“Some people just feel they have to stay with that traditional new home in a new subdivision when they leave a family home,” says Jill. “But if you step out of the box and do something unique, it makes that move so much better. And that’s what I loved about this really, more than anything I think — it was something to look forward to.”