Jeff Kinney began his coral and marine business like many hobbyists do. He sold pieces out of his personal tank on Craigslist, leading him to his business partner Matt Varble and their eventual shop Whitlyn Aquatics.

The shop, located in McCutchanville, provides hobbyists and other businesses with live coral, saltwater fish, starfish, crabs, snails, tanks, and everything needed to start or grow an aquarium.

As one of the few saltwater aquatic stores in the area, Whitlyn Aquatics services a radius including Indianapolis, St. Louis, and Louisville, Kentucky. For hobbyists in the area, there aren’t many options other than ordering online, which is risky.

“You can be deceitful as a vendor online,” says Kinney. “I feel like we’ve done a good job gaining the trust of the Tri-State.” 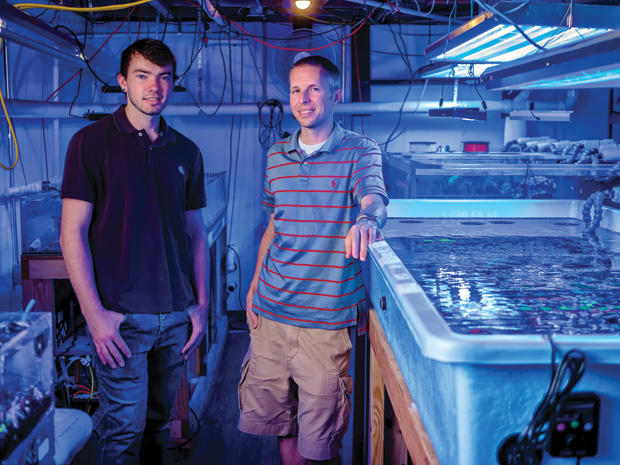 ▲ Above, Matt Varble and Jeff Kinney began their saltwater aquatics shop Whitlyn Aquatics earlier this year. The business partners met when Varble was interested in purchasing a piece of Xenia coral Kinney had listed on Craigslist. Varble never ended up with the Xenia, but instead he and Kinney expanded their personal ventures into Whitlyn Aquatics. Portrait and tank photos by Zach Straw, product photos by Jeff Kinney.

The store, open on Tuesdays, Thursdays, and Saturdays, began in early February but has been online since fall of last year. The gig isn’t Kinney’s day job, however. He also works full-time as a healthcare IT consultant for Innovative Consulting Group.

The business is a true passion project. Kinney and Varble installed all of the plumbing and lighting themselves. The store uses about 2,000 gallons of saltwater and is sectioned into separate tank systems, each needing to be individually maintained and managed.

“So easily you can lose everything in the tank,” says Kinney. “The stakes are so high because my inventory can die. It’s a constant care.” 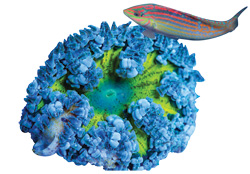 With live shipments coming in from Africa, Australia, Indonesia, Hawaii, and the Caribbean, each order has to be perfectly timed. A shipment from Africa directly goes to Los Angeles, where it must clear through customs. From there, the shipment goes on an overnight flight to Louisville, where Kinney and Varble are waiting to drive it back to their McCutchanville store.

“Part of me feels like there’s some responsibility with this, because one day it might be illegal,” says Kinney. “It might be all dead some day. I’m able to take one piece, keep it alive, and send it out to other people’s tanks. And then they can do the same.”

For more information about Whitlyn Aquatics, call 812-760-2105 or visit whitlynaquatics.com.