Among the activity in Downtown Evansville lies a movement to preserve the buildings and spaces of the area.

From the Greyhound Bus Terminal to the Owen Block at the corner of Second and Chestnut streets, Evansville is seeing a revitalization of some of its vacant, older properties. Scott Danks and the group Professional Plaza LLC have capitalized on a chance to develop one such building in the heart of Downtown.

Administration Building located at 1 S.E. Ninth St. The 42,000-square-foot building closed at a cost of $740,000 and plans for renovation began to take shape almost immediately. Sitting on one-third of the city and county government campus and adjacent from the Civic Center, the building has two floors and a lower level, as well as its own parking lot.

“These are the most exciting times for Downtown in my lifetime,” says Pat Shoulders, a partner at law firm Ziemer, Stayman, Weitzel and Shoulders, LLP in Evansville, who acts as the legal representation for EVSC. “I think the timing, frankly, could not be better. The whole vitality and viability of Downtown is just great and this construction seems to fit the current trend.”

The story of how Professionals Plaza LLC, a private entity, was able to purchase the vacant school corporation building has an air of fate to it and begins almost six years ago. Facing major budget cuts in 2010, former EVSC Superintendent Dr. Vince Bertram and his administration made a decision with the board of school trustees to begin to consolidate some facilities, says Shoulders.

▲ The former EVSC Administration Building sitting on one-third of the city and county government campus in Downtown has been given new purpose thanks to Scott Danks and Professionals Plaza LLC. When Evansville Federal Teachers Credit Union approached Professionals Plaza LLC about placing a Downtown location inside the renovated former EVSC building, the company also expressed interest in naming rights. Photo by Paige Danks. 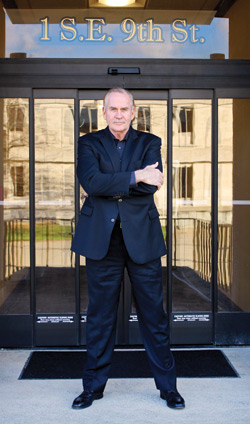 “As a result of that plan, the old administration building was excessed as part of the (move to) what used to be the school corporation warehouse there along Walnut Street,” says Shoulders.

After the move of their administration offices to Walnut Street in 2011, EVSC worked to find a buyer for the former office building, says Shoulders. The corporation was in negotiations with the county government for a time, giving officials the opportunity to acquire the property because of its location on the government campus. There was an interest on the county’s part, but “for whatever reason, the plans were never successful,” says Shoulders.

“We considered alternative plans,” he adds. “We even had developers from Indianapolis take a look at the property in terms of taking it down and making it more parking. They explored it and there didn’t seem to be any thing that could be done.”

The former administration building was listed on the market as a commercial property with Joe Kiefer at Hahn Kiefer Real Estate Services, where it would sit vacant for three years. It would be a chance conversation between Shoulders and Danks that would start the sale talks.

One day the two lawyers, who were each representing clients in a case against one another, walked out of the courthouse and past the EVSC building when Danks, an attorney at Danks & Danks law firm, jokingly asked, “Pat, would the school corporation sell that building to a private developer?”

“When Scott just happened to mention it, I said, ‘Well, let me check first with the school corporation administration and get back to you,’” says Shoulders.

As it would turn out, the corporation was very interested in selling the building and authorized Shoulders to begin talks with Danks. “What you learn is in the world of real estate, the fair market value of a property is what a willing buyer is willing to offer a seller,” says Shoulders. “Scott’s group offered them a price that the board of school trustees was willing to accept and to return to the taxpayers of Vanderburgh County.”

For Danks, his ambition for the development of the plaza is as big as the building itself. He adamantly claims he is not a developer and the time and money used for renovations of the property — now called the Evansville Teachers Federal Credit Union (ETFCU) Plaza — is to help preserve it.

“This building was not acquired for anybody to make money off of,” he says. “It was to preserve and protect the use of the building. Our goal is to just break even with it.”

Danks has spent his career working on the government campus in Evansville, starting as an intern for Judge William H. Miller of the Vanderburgh Circuit Court when he was 18 years old. He’s been in the courts building and Civic Center “my entire adult life as an attorney,” he says, and has a love for “our government campus. I wanted to ensure that the former school corporation building did not fall into the wrong hands.”

The building has not yet been marketed and currently holds two tenants; Danks’ law office Danks & Danks and the Downtown office of Evansville Teachers Federal Credit Union.

“Adding a Downtown location was in the best interest of our members,” says Brent Joyce, vice president of marketing with ETFCU. “The opportunity to work with Professionals Plaza originated early in our process of looking to add a Downtown location. We were excited about their plans for the building, and we seemed to share an excitement about how the joint effort could fit into the Downtown area.”

Not only was the credit union interested in occupying a portion of the new office space, Joyce says ETFCU also expressed interest in the naming rights for the building. With a history beginning in Downtown Evansville and founding connections with the school corporation, he says it seemed a natural fit.

“Working with Mr. Danks, we felt a common commitment to the community. We’re excited about where the project is going and what it’s ultimately going to offer Downtown Evansville,” says Joyce.

The investment placed in the renovation has totaled $5 million and has been no small feat for Danks and Professionals Plaza LLC. Upon first touring the building, Danks says the hallways, rooms, and offices reflected the building’s past as a 40-year old school corporation office. He became determined to make ETFCU Plaza Class A office space in Downtown, including mahogany trim, new entrance doorways, attractive office signs, and luxury public restrooms in his renovation designs.

“We’ve done so much to this building,” he says. “We completely gutted it to the walls. We now have state-of-the art technological capabilities, highly-energy efficient HVAC and lighting systems, outdoor and indoor security systems, as well as automatic doors with keyless access.”

Along with the process of renovating the inside, Danks worked to spruce up the outside of the property as well. All new landscaping was added, including new sod, plants, trees, and an irrigation system. The parking lot was redone as well, and during the process, Danks was approached by a city engineer to add another environmentally-friendly aspect to the grounds. 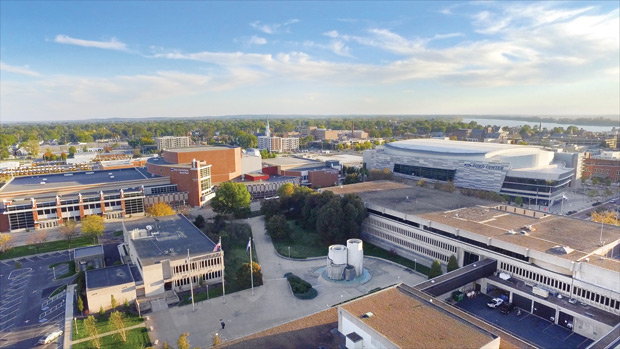 ▲ Sitting adjacent from the Civic Center on Evansville’s government campus, the ETFCU Plaza offers its own parking lot to tenants and visitors. Developer Scott Danks anticipates a restaurant, coffee shop, and fitness center to call the building home as well.

The city approached Danks about a $400,000 grant to install a water retention system to keep rain water out of the city’s combined sewer system, and from flushing the waste into the Ohio River. Danks jumped on board and from there, a 20-foot wide by 20-foot deep pit was built at the back of the parking lot next to Ninth Street.

“It’s filled in with limestone rock and Downtown Evansville sits on a sand bed,” says Danks. “So all that rainwater goes into there and it slowly dissipates out. It’s cool.”

The system collects water from the parking lot, the water run off from ETFCU Plaza’s roof, and from Ninth Street.

Currently, the first floor hallway, bathrooms, and the office space for Danks & Danks and ETFCU is completed. The rest of the space in the building is waiting for the tenants to build out, says Danks. He is looking to fill the space immediately with tenants such as law firms, architects, engineers, or other professionals, but his hope is to find those businesses and individuals who are the right fit for the building.

“We’ve had a huge amount of interest and we haven’t even started marketing yet,” he says. “It’s really the epicenter of Downtown and it’s only going to grow.”

Office space is not the only offering ETFCU Plaza will give Downtown. Danks says he anticipates a restaurant and coffee shop on the first floor, and a fitness center in the lower level of the building. He also has plans with the Arts Council of Southwestern Indiana to host a gallery featuring Tri-State artists.

“So far everything is working out great and it will continue to do so, but initially it was scary,” says Danks. “I had no idea what I was getting into, what the cost was going to be. It’s a huge, huge, huge investment.”

For more information about the ETFCU Plaza, contact Scott Danks at 812-459-1655, email at danks.scott@yahoo.com, or visit professionalsplazallc.com.