Voices on the Speaker 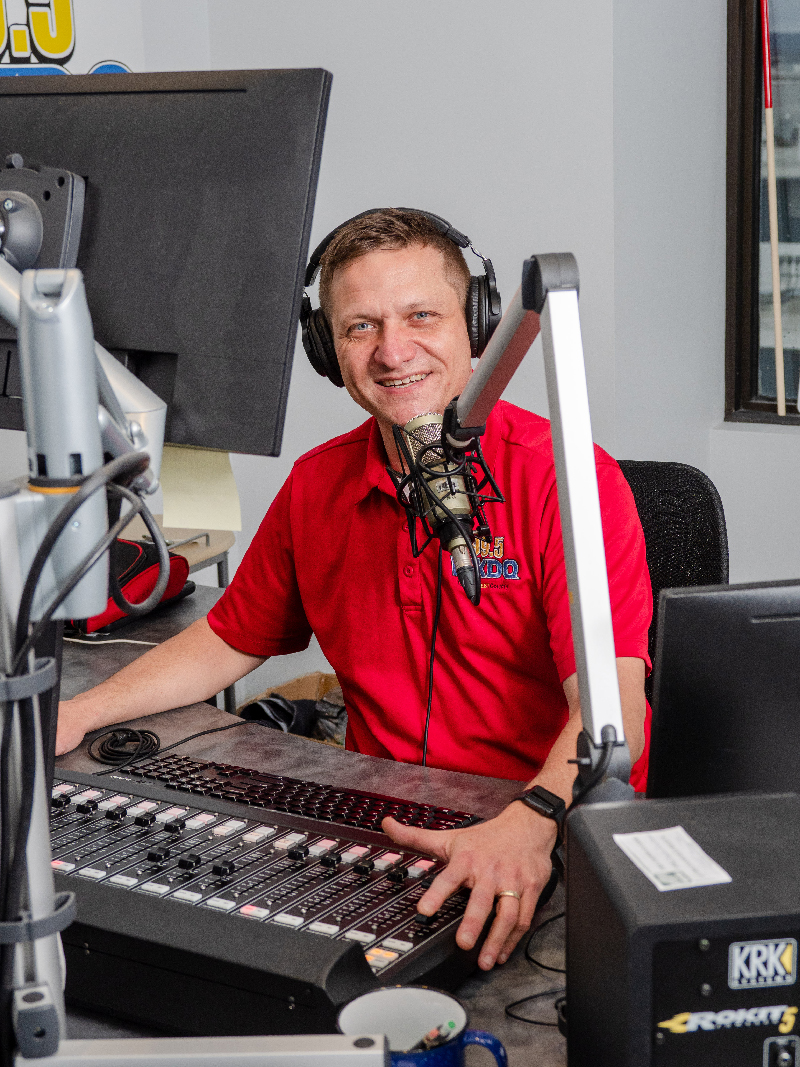 In the February/March issue of Evansville Business, we dived into the history, business, and key factors of radio’s success in the Tri-State. From Midwest Communications on the West Side to Townsquare towering over Downtown in the Fifth Third building, radio stations and hosts in Evansville are well-known. But even if you hear their voice through your speaker every morning or like their posts on social media, you may not know all there is to know about our local DJs. To get to know them better, we went behind the mic with five DJs you know and love. 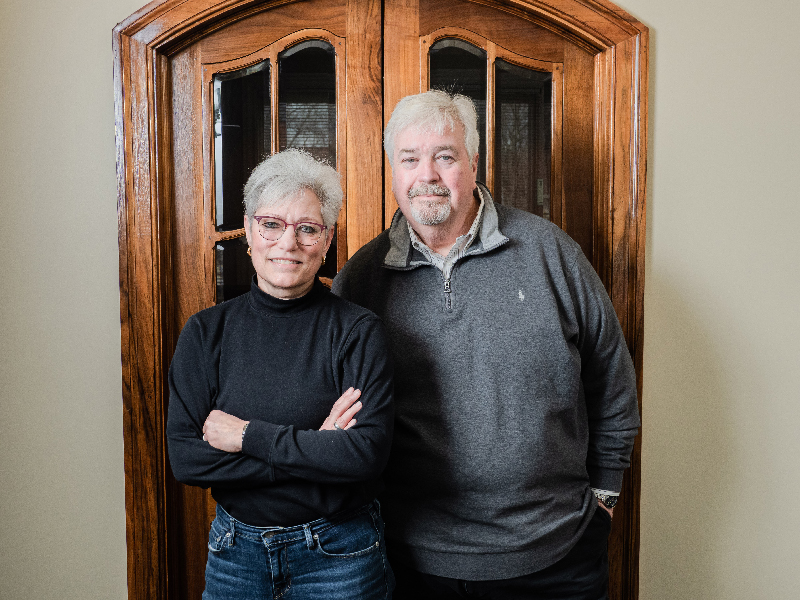 Co-hosts of the 104.1 WIKY Morning Show at Midwest Communications, Dennis Jon Bailey and Diane Douglas have been major players in Evansville radio for 16 years. Self-proclaimed partners in crime, they each still have their own unique stories.

Bailey has been in radio for 47 years, working in major markets such as Boston, Indianapolis, Chicago, and San Diego. He came to Evansville from Cincinnati specifically to work for WIKY, which he says is operated as if it’s in a large market like his previous endeavors.

“I’ve never worked as hard as I have here,” he says.

Douglas is originally from Milwaukee, Wisconsin. She moved to Evansville expecting a two to three year stop on her way to a larger market with more radio opportunities. Twenty years later and she has no plans to leave the River City she now calls home.

“Dennis and I are not from here but we’ve embraced Evansville and embraced the community — it’s our home,” says Douglas. “[The audience] responds to that and there’s a lot of loyalty that comes out of that.”

Besides their on-air dynamic, Bailey and Douglas have found major success through WIKY’s format. A heritage station and the oldest FM station in the Tri-State, WIKY is one of the few remaining stations to function on a combination of music and information broadcasting.

The duo has been nationally recognized — winning a Marconi award in 2011 and No. 1 morning show in the country among several other honors listed in the full radio story (http://www.evansvilleliving.com/articles/making-waves).

“It’s so cliché but I was the one who had a hard time staying quiet in class, the whole class clown thing,” he says. “I would come home and go to my room and turn the radio on and listen to the Sandman (Mike Sanders passed in 2019) or Brian Jackson. Now I have the opportunity to do that in my own way and hopefully somebody’s laughing in the morning.”

A Mater Dei High School graduate who received his bachelor’s degree in radio and TV from the University of Southern Indiana in 2001, O’Bryan started his career straight out of college.

Originally working overnight shifts at 103 GBF, O’Bryan moved to afternoons on Kiss 106 in 2004. He remained with 106 for 14 years working a variety of positions including promotions director and morning show host. He even worked as an afternoon sports show host on 105.3 (WJLT) when it was an ESPN format. O’Bryan finally accepted his current positions in March 2018 and has been ruling the country airways with co-host Leslie Morgan ever since.

“[Radio] gives me the opportunity to hopefully, not to sound too corny, brighten somebody’s day in some way, shape, or form,” he says. “We here at Townsquare make community involvement a major priority for us. Really just making ourselves a part of the community because we all live and work here too.” 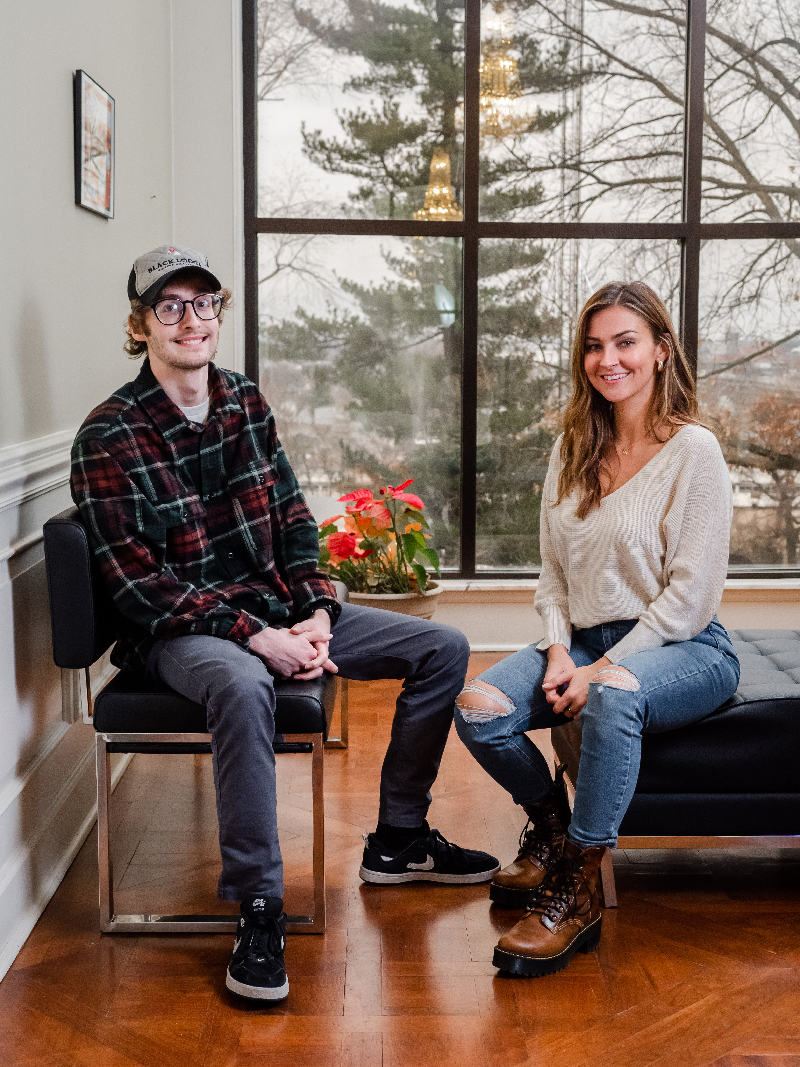 You may not recognize his first name, but Tyler Cooper is one half of one of the Tri-State’s most popular morning shows, Claire & the Hot 96 Morning Show. Alongside Cooper, Claire Ballard — co-host, namesake, and founder of the morning show in its current format — brings the Tri-State all things Top 40.

Both Evansville natives and graduates of the USI, Ballard and Cooper have a lot in common. Despite their slight age difference, they are some of the freshest personalities in the Evansville radio game, bringing fresh perspectives to the airwaves.

“We have big shoes to fill at Hot 96 because there’s been so much big talent doing the morning show here,” says Ballard. “There is something extra cool about being able to do this in your hometown.

Owned by Midwest Communications, Hot 96 is one of the largest signals in the Tri-State and the first station Ballard worked at during her last years at USI in 2008. Ballard, who had originally focused her college years on TV work, became obsessed with radio as an intern. By the time she graduated in 2010 she has already been hired full-time for the night show at Hot 96.

After a three-year stint in Las Vegas working with KWNR, Ballard returned to the radio community that first inspired her and would continue to support her work.

“I realized the reason I got into radio was to be able to connect with an audience and I wasn’t able to do that in that role [in Las Vegas],” she says. “I moved back here and within a year I went into the open morning show position. I think that because it’s a smaller community you do feel like you get to know these people.”

After starting the show in 2016, Ballard went through several rounds of co-hosts, with Cooper guest-starring each morning before his classes at USI where he also worked at 95.7 the Spin, the campus radio station, like Ballard and O’Bryan before him.

“I am by all accounts an introvert and radio had never crossed my mind,” says Cooper. “That being said, I was always intrigued by radio though.”

Cooper switched his major from history to communication studies, eventually changing it again to radio and TV when he was bit by the radio bug at 95.7. He started his career at Midwest in 2017 in the promotions department, but as fate would have it, he would become the last man standing at the end of the morning show’s roster changes. The rest, as they say, is history.

“Growing up on air in a way has been really interesting,” says Cooper. “I turned 21 on air, I literally met my half-sister on the air. Being able to share that journey and connect with other people that’ve gone through the same things is crazy. As cliché as it sounds, building that connection is a really cool opportunity.”