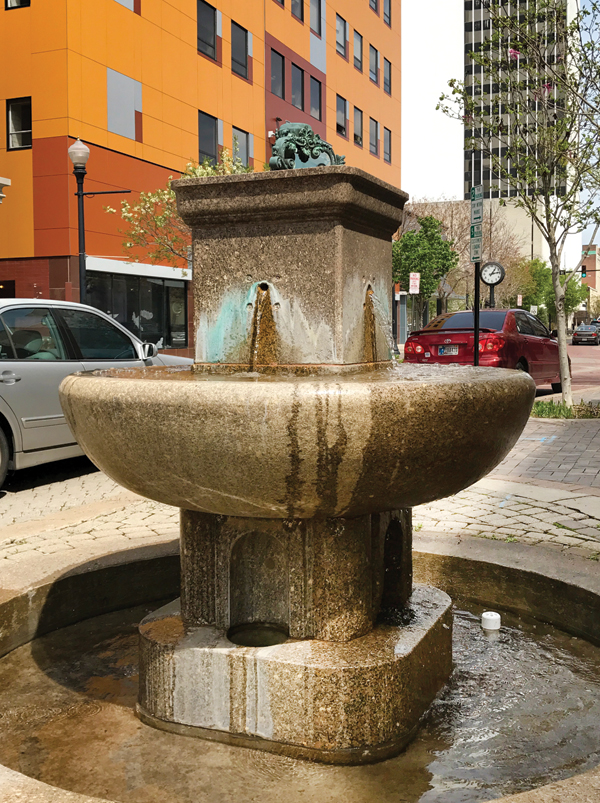 If you’ve been along Main Street Downtown during your hectic lunch hour, you may have seen a marble fountain near the corner of Main and Third streets. If you’re uninitiated in vintage equine refreshment, then you may not recognize it as a horse fountain.

A plaque bolted to the sidewalk near the marble fountain reveals clues to its origin: “1910 Presented by the National Humane Alliance Hermon Lee Ensign Founder.”

According to Department of Metropolitan Development Executive Director Kelley Coures, the horse fountain was built, placed, and dedicated in 1910 near Willard Library and the old Municipal Market on First Avenue. The marble structure was paid for by a generous soap manufacturer named Melser and erected by the humane society of the time, led by Dr. Abraham Owen, for whom the recently renovated apartments The Owen Block are named.

In service until 1956, the fountain was moved into storage at the museum while the intersection at First Avenue was rebuilt. It was relocated to its current position in 1971 after the Main Street Walkway was constructed. Today, the fountain may show its age in wear and color, but it still stands ready to accommodate the next thirsty horse that may wander by.