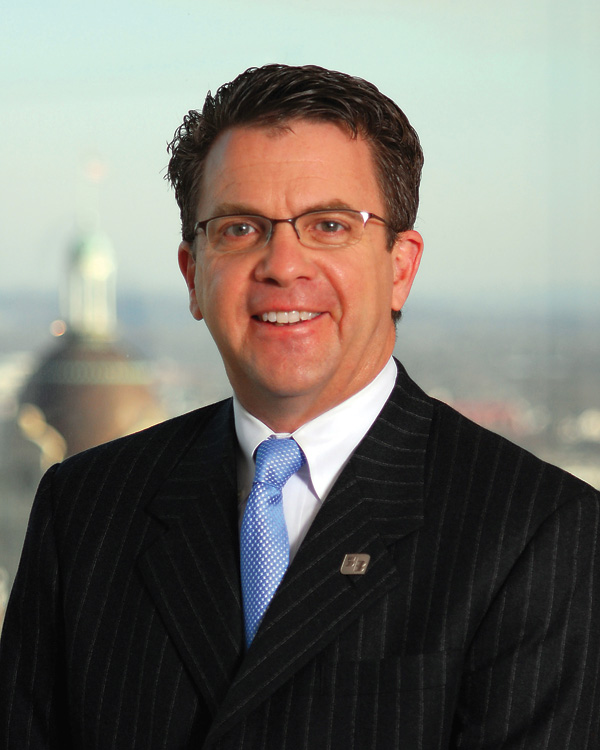 Have you heard? Evansville’s building a new arena Downtown. It’s a big deal. Such a massive undertaking has opponents and proponents. Though we are halfway through the completion of the 11,000-seat project, let’s assume the proponents are right, and hundreds of new jobs are on the way. Now what? We asked several business leaders that very question. How can we be proactive to ensure the Tri-State continues to see economic prosperity? They told us… 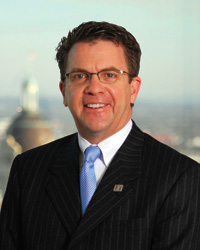 Evansville native Lloyd Winnecke has worked at Fifth Third Bank for 12 years, previously spending 18 years in the television industry. In January 2009, he took office as a Vanderburgh County commissioner. Winnecke is a longtime advocate for consolidation of the city and county governments, a move he believes will spur economic growth.

Definition of city progress: New employment opportunities for the community as well as new amenities that improve the quality of our lives.

On Evansville’s greatest strength: Our workforce. Time and again, if you talk to companies looking at coming to Evansville, they are impressed by the number of quality workers available for their prospective facilities. It’s an educated workforce; it’s a workforce that has outstanding work ethic.

On areas to improve: The multiple layers of government. Hopefully that will change in the not-too-distant future. If you’re looking at bringing a company to our community, there are a lot of layers of government to go through, even on a preliminary stage. That becomes an impediment; it just creates additional steps in a process that already is cumbersome.

On how to change: By combining city and county governments and creating a single point of leadership, I think it only will enhance our economic development opportunities. At this time, the best estimate is that it would be on the ballot in 2012. 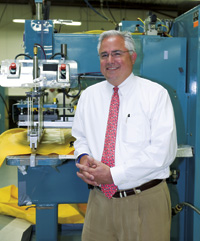 Harrison High School graduate Pete Mogavero has been employed for 23 years with Anchor Industries, an Evansville-headquartered company producing fabric products such as tents and awnings for recreation, industry, and the United States government. Mogavero’s travels around the country give him insight into what other cities have done to encourage economic growth.

Although Pete Mogavero leads Anchor Industries, a company located north of the city’s center on U.S. Highway 41, he looks to Downtown as a catalyst for continued economic prosperity. Mogavero says his definition of progress is a growing employee base and a vibrant Downtown that attracts people both for working and living, and he likens Evansville’s potential to the renaissance of Chattanooga, Tenn. — another river city with an industrial past. Last year, Bloomberg Businessweek magazine reported that Chattanooga was one of just three American cities (the others were Milwaukee and Ventura, Calif.) to add jobs downtown from 1998 to 2006. The city’s population also grew nearly 10 percent from 2000 to 2008.

He’s found that many of our city’s strengths — affordable cost of living, short commutes, relatively low crime — are attractive to prospective Anchor employees. His biggest concern about doing business isn’t locally based; it stems from what he believes to be excessive spending and taxation by the federal government. “Some companies,” he says, “are hanging on by their fingernails.” 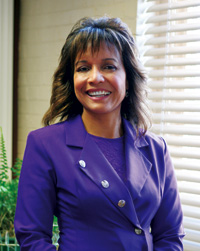 Maura Robinson, a native of Venezuela, has lived in Evansville for 34 years. Sixteen years ago, she founded her consulting and training business that specializes in multicultural training. This year, she’s pursuing a new way to change the city: She’ll be on the November ballot for the position of Vanderburgh County auditor.

When Maura Robinson accepted a contract from the city to create awareness of the 2010 census, she encountered Evansvillians from a spectrum of economic and cultural backgrounds. Despite the differences, “people are here trying to make Evansville better,” she says. “Everyone has something to give.”

That sense of community has kept Robinson in Evansville for decades. Still, she sees room for improvement in several areas: keeping the future generation of business leaders in Evansville; providing amenities for young, single professionals; encouraging small business development; and recruiting and retaining people of diverse backgrounds.

The latter comes down to what Robinson calls a true intentional purpose — and she says it must start at the top of a company and trickle down to all employees. “Are you really trying to attract people who are diverse?” she says. “If you are, when I come to your city or your business, do I see people who look like me? Part of that intention as a community is what we want to project.”

Another passion of Robinson’s is furthering the development of small businesses, including minority business enterprises and women’s business enterprises (MBEs and WBEs). For women and minorities, securing funding is a challenge, Robinson says, as is the opportunity to bid on contracts. But she believes that small businesses will flourish in the coming years. “As people get displaced by attrition or jobs get eliminated, there’s going to be a need to reach out to these businesses to support corporations,” Robinson says. “If you hire a consultant to work for you, you don’t have to pay that consultant benefits. So companies really are taking a different look at small businesses for survival.”

For 36 years, Norman Miller has worked in Evansville. The native heads the local operations of a longtime investment firm. Once located Downtown for 30 years, he moved Northwestern Mutual Financial Network: The Evansville Group to the East Side near the intersection of I-164 and the Lloyd Expressway, an area Miller believes could become the center of Evansville. The city still needs a prosperous Downtown, he believes, and with new developments such as the arena, that area is on the right track.

Definition of city progress: Paying jobs and opportunities for our children to stay in this community.

On Evansville’s strengths: In the recent economic meltdown, Evansville didn’t melt down like other communities did because we have a diverse economy and employment base. And, we’ve had some good leadership on the public side of the equation and the private side that have interacted well with the public. There are leaders who recognize that if we aren’t green and growing, we are brown and dying. They have and are trying to get the community to have — what I would describe as — a can-do attitude, evidenced by the new arena.

On areas to improve: Anyone trying to bring prosperity and change to our community has to understand that we always will have what I define as DOVEs: people “Devoted to Opposing Virtually Everything.” Whether it was Casino Aztar, the arena, the bike path, the Riverfront — there are people who always will oppose those things. That’s just a part of a process, yet we should be devoted to growing and making this a great place to have a great standard of living.

On how to change: It needs to be an open dialogue, a recognition it does take a public and private partnering — an abundance mentality that is purveyed through everyone’s actions. If a new employer comes in or existing business wants to make a change and needs a city or county permit, regionally we’ll need an attitude that doesn’t build up barriers and fences. 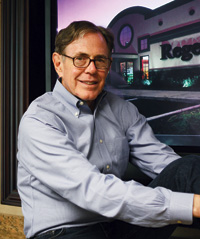 Jim McKinney, an Evansville native, returned to his hometown in 1977 after working in New York, Detroit, Chicago, Indianapolis, and Pittsburgh. The well-traveled businessman landed that same year at Regency Properties, a commercial property company he now leads. Based in Evansville, Regency develops properties in six states: Alabama, Illinois, Mississippi, South Carolina, Kentucky, and, of course, Indiana.

With his company headquartered on the East Side, Jim McKinney would love to see other company headquarters in any part of Evansville. Though McKinney welcomes jobs when companies open operations in the area, it “means we are the ‘hired hand,’” he says. Evansville is an attractive place to do business, he says: a good labor pool, a sound state government, and a convenient cost of operation. But, “true wealth is to be the intellectual capital that is developing and evolving a business,” says McKinney, pointing to Evansville-based Berry Plastics, one of the largest privately owned businesses in Indiana, as one example. Berry currently is undergoing a $150 million expansion in Evansville. That’s an “intellectual capital investment” in our community, McKinney says.

He wants Evansville to have a culture that nurtures small companies to become the next big enterprise. One of the best ways to attract CEOs to the community? CEOs “wish to be in a community with which they identify. They see a diverse culture. They see a culture that has arts, an outstanding educational system, and a connectivity with the rest of the world,” McKinney says. “For us to attract headquarters, we have to be a place CEOs want to live. That will cause vitality and growth here more than anything else.” 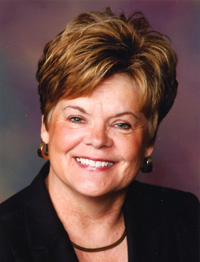 Evansville native Vicki Snyder was named principal of Signature School in 2001. A year later, the school — once a half-day program for Evansville Vanderburgh School Corporation students — became a full-time charter school. This year, Signature School was ranked seventh on Newsweek’s list of America’s top high schools. Snyder’s career in education has shown her what young people need to become leaders.

On how Evansville educates: Charter schools are designed to be schools of specific purpose, and we honed in immediately on global education. We felt that was going to become a very important component in educating the (leaders) of tomorrow. When you look at the K-12 aspect, there are choices both in public and parochial institutions, as well as the private schools. Then, the University of Evansville and University of Southern Indiana add to the overall strength of what Evansville has to offer.

On areas to improve: Making sure students are well prepared for post-secondary aspirations. I read that something like 80 percent of future jobs will require some kind of college education. In Indiana, the percentage of adults with college degrees ranks among the lowest in the country. (We need) high expectations, offering college prep courses and courses such as Advanced Placement and the International Baccalaureate program.

On areas of increasing importance: (At Signature School), there’s a great deal of emphasis on writing, critical thinking, and analysis — projects that take kids outside their comfort zone and make them aware that there’s a large, intricate world out there. You have to listen to other people’s opinions and be able to weigh and sift through all the information that comes your way.