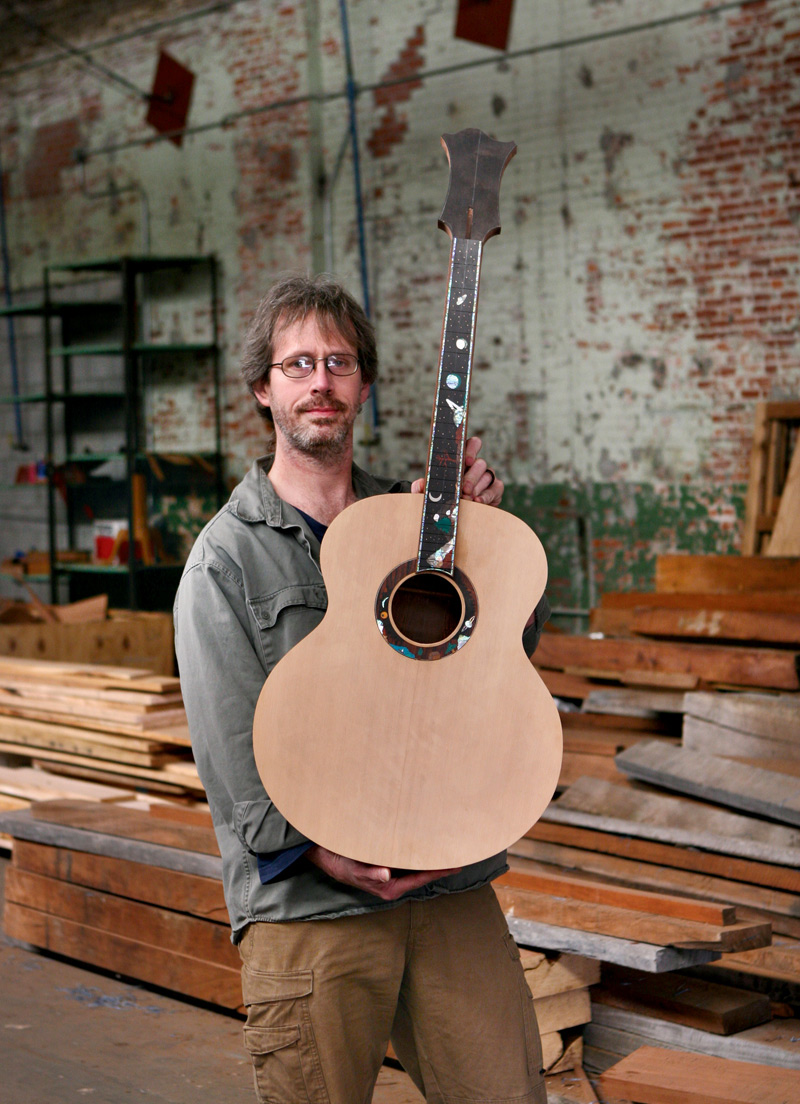 Some people have one “Who” moment. Evansville resident Todd Hubbard has been lucky enough to have three.

Hubbard owns Hubbard Guitars, 813 E. Franklin St., where he builds and sells handmade acoustic and electric guitars. A 1992 graduate of the Roberto-Venn School of Luthiery in Phoenix, Ariz., he founded his business in Evansville in February 2012.

The 45-year-old has long had an interest in music. His first guitar was a Sears acoustic that his father gave him when he was 10, and he’s been playing ever since.

“Even when I was in the military, I was still building guitars,” Hubbard says. He did one tour with the U.S. Army in Bosnia and two tours in Iraq, serving from 1998 to 2006. It was while Hubbard was in Bosnia around April 2000 that he received a handwritten letter from Pete Townshend, the guitarist for The Who. The letter was in response to Hubbard’s offer of a handmade guitar. While Townshend declined, “it was the most polite no I have ever gotten.”

Then, on Nov. 12, 2012, Townshend was on NPR’s “Talk of the Nation,” a radio show, taking calls from fans describing their favorite “Who” moment.

“I called in and told my story and thanked him for returning my letter,” says Hubbard. He added that Townshend’s handwritten letter, delivered while Hubbard was in the midst of fighting a war, had made a big impact on him and his fellow soldiers.

That’s when Hubbard realized that Teen Cancer America and Teenage Cancer Trust could benefit from the donation of his handmade guitar. Teen Cancer America is a charity devoted to improving the lives of teenagers and young adults with cancer. Teenage Cancer Trust is a charity based in the United Kingdom with a similar purpose. Townshend and Roger Daltrey, the founder of The Who, are the driving forces behind both organizations.

After completing the guitar, Hubbard drove it to Louisville on Feb. 16, the night The Who was playing in the KFC Yum Center. “I received a backstage pass, and I got to meet Pete Townshend and Roger Daltrey … and we talked about things that the Teenage Cancer Trust is doing,” says Hubbard, “I gave them the guitar, and they both signed it for the auction that will be held on a later date.”

“The experience of meeting them was just fantastic,” Hubbard says. “Their positive energy is just phenomenal, and it’s contagious.”

He adds that he was inspired to auction off the guitar because he knew it was for a great cause.“My goal is to progress the art form and pass it on to those who want to learn luthiery,” Hubbard says. “If I can better myself and someone else at the same time, you bet I will do that.”