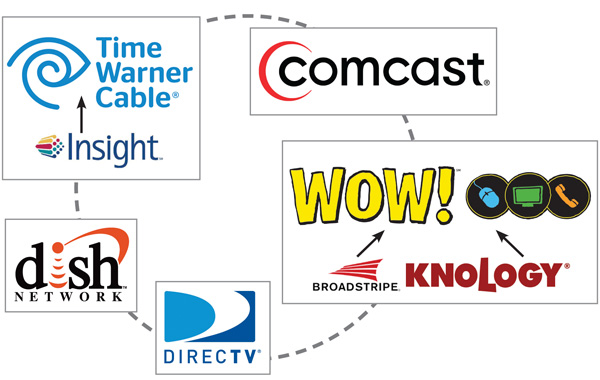 Entertainment comes at a cost. Whether consumers want 200 channels, digital video recording options, or great customer service, they choose the most accessible and reasonably priced cable or satellite service available to them. In the case of cable, households often are limited to one or two provider options.

Time Warner Cable connects more than 15 million customers in the U.S., with networks in Newburgh, Madison, Terre Haute, and many other Indiana towns. On Feb. 29, TWC increased its Indiana presence by purchasing Insight Communications for $3 billion, adding more than 760,000 former Insight customers in Evansville, Kentucky, and parts of Ohio. The acquisition, announced this past August, now is in full swing, but what does this mean for customers with Insight-branded cable boxes whose company no longer exists?

Mary Jo Green, TWC vice president of communications of the Midwest, says the integration process of Insight into TWC will take time. “Our networks are still separate, but we will eventually have former Insight customers on our cable platforms,” she says. With today’s technology, software in cable converter boxes can be automatically updated with new channel lists, on-screen guides, and service packages, though TWC’s forthcoming plans still are unspecified. “With a merger,” says Joni Howell, executive director of the Indiana Cable Telecommunication Association, “customers will have access to different products and services than with a smaller cable company.” (Both Insight and TWC have been longstanding members of the ICTA, an association that represents the cable industry in the Indiana General Assembly and works with the Indiana Utility Regulatory Commission.)

This acquisition process has precedence. WOW!, a cable provider that services Michigan, Illinois, Ohio, and Indiana, purchased Broadstripe’s Michigan customer base and systems on Jan. 14, and announced a purchasing agreement with Knology for $1.5 billion on April 18. The Knology acquisition adds more than 300,000 customers to WOW! in the Southeast, giving them a total of 800,000.

“As big as Knology is for us, Insight is that much larger for TWC,” says WOW!’s chief marketing officer Cathy Kuo. Knology’s vice president of sales and marketing Royce Ard says the two companies are a great fit for each other. “The acquisition gives us more reach and the ability to be more cost-efficient with customers,” he says.

WOW! plans to upgrade Broadstripe’s high-speed Internet in 2012, and add more HD networks to Broadstripe’s channel line-up by changing it to an all-digital format. WOW!’s acquired customers in Michigan will eventually see new logos appear on Broadstripe uniforms and trucks as the re-branding process sets in.

Green says the main advantage of merging smaller companies into larger ones — Insight into TWC, Knology into WOW! — is better economies of scale. “With a larger company you have more negotiating power,” Green says. “It’s like buying in bulk; you get a better discount if you buy 20,000 uniforms than if you buy 2,000.” By purchasing Insight, TWC can use its acquired leverage to attract new customers already attached to Insight’s former networks.
According to Howell, it doesn’t make business sense for a cable company to build a whole new network — which takes millions and millions of dollars — on top of a competitive one. “Even if you get half of the customers, it doesn’t justify it,” she says.

Howell says that in the past, a small town would reach out to a cable company, such as Comcast, and the mayor and cable company would agree upon a rate. This would effectively give that company exclusive rights (a monopoly) in that community. “Evansville, because of its condensed market, has never had this problem,” Howell says. Fortunately, the 2006 telecommunications deregulation bill got rid of cable franchises all together, removing exclusive cable provider rights in towns and increasing competition, allowing customers more choice in who they connect to.

Satellite systems have a different solution to the cable problem. The two main players — Dish Network and DirecTV — avoid the geographic reach dilemma all together. “All Dish needs is an unobstructed view of the southern sky,” says Aaron Johnson, Dish Network communications manager. According to Johnson, households only have so many cable providers they can connect to, but satellite companies install their own equipment, and homes don’t need to be pre-wired. A satellite can be rigged atop an RV in the desert, while running a cable may be expensive and impractical.

The cable industry paired against satellite companies creates broad, healthy competition. But, regardless of the recent acquisitions, the choice of cable providers remains relatively open for local customers. Comcast and WOW! are prevalent in the Evansville area, but now that Insight has more leverage — and the potential for more consumer options with TWC at its wheel — Evansville’s current cable cartels may see some tough competition in their future.