Wisdom from ‘The Woz’ 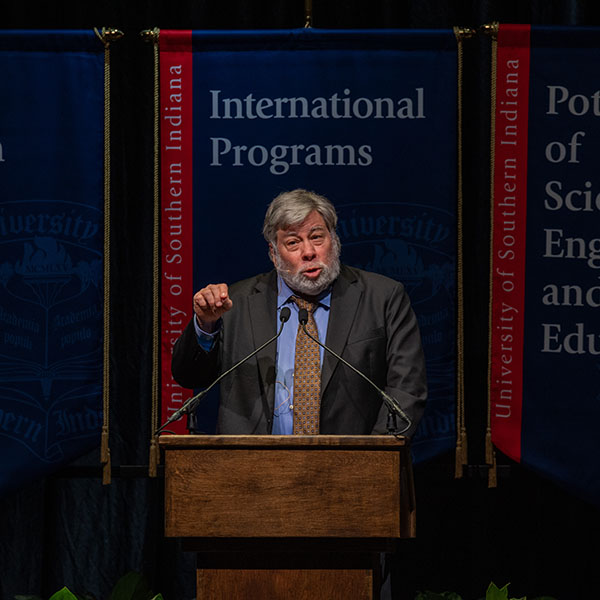 Fast-talking and curious-minded Steve “The Woz” Wozniak, co-founder of the Apple Computer Company, took an awed audience on a whirlwind tour of his life as a futurist and meeting Steve Jobs, his thoughts on the environment and space junk, and his formula for life: happiness = smiles – frowns.

Taking center stage in the University of Southern Indiana’s Screaming Eagles Arena on March 30 as the fifth speaker in the Romain College of Business Innovative Speaker Series, Wozniak revealed that jokes and having fun were the motivation behind his genius inventiveness that began as a boy when he and his neighborhood chums rigged wires between their houses to buzz each other late at night.

The self-taught computer guru — there were no textbooks on the subject available during his youth — came of age during the dawn of personal computers. At a time when only the government and mega corporations could afford the information behemoths, Wozniak dreamed of one day owning his own personal computer.

A mathematically minded, self-claimed geek, Wozniak set his sights on becoming an engineer like his father and built his first computer, a rudimentary storage device, while still in the single-digit age group. Later, he advanced to a binary eight-bit processor that he and co-inventor Bill Fernandez named the Cream Soda, which was destroyed when a reporter interviewing them tripped on the cord and fried it.

Wozniak said he doesn’t have it in him to regret yesterday’s woes; he is too busy “dreaming outside the rules” and imagining the next “What If.”

Wozniak and Jobs met through Fernandez, and their relationship continued as Wozniak went to work as an engineer for Hewlett-Packard after dropping out of the University of California, Berkeley after one year. He said Jobs didn’t have his computer-building skills but was a charismatic front man who sold an idea (a single-player Pong game) to Atari (where Jobs worked) and needed Wozniak to create. A four-day deadline had Wozniak working nonstop, which led to an ingenious breakthrough idea during a sleep-deprived state: a video game in color.

Turning the world on its head and making things fun is central to Wozniak, who described himself as a “nonprofit person.” Together, the two concepts led him to give away his designs for personal computers to his friends in the 1970s Homebrew Computer Club (of which Jobs was a member) and help them build their own PCs. More recently, he fulfilled a dream to be a teacher by creating an online educational technology service for students, which he ran for eight years.
Between these two periods of his life, Wozniak was a loyal employee to Hewlett-Packard with a desire to make things for “normal people” that drove his vision for computers to evolve from punch-card coding to personal devices consumers could type directly into. He and Jobs were busy developing and perfecting their ideas, one he took to HP multiple times, but HP declined to pursue it. Wozniak said he didn’t want to leave HP or climb the corporate ladder to so-called success; he wanted to engineer computers. It was only when a friend pointed out he could be an engineer and earn money that he quit HP and formed the Apple Computer Company with Jobs.

Wozniak said his and Jobs’ desires to create personal computers were founded on different dreams: Jobs yearned for greatness, while Wozniak wanted to equal the playing field between the disabled and able. He joked that his aspiration to develop a device that sighted the blind resulted in the reverse effect, blinding the sighted as so many people today walk around staring down at their phones.

His fun-loving nature and propensity to joke led Wozniak to craft an identification card he used when boarding planes claiming he was employed by the “Department of Defiance,” which once got him detained by the U.S. Secret Service. He later completed college under the name Rocky Raccoon Clark, earning a diploma bearing the moniker.

During Wozniak’s evening at USI, it was sometimes hard to tell if he was joking as he sounded circular and self-contradictory, saying, for example, that Elon Musk was a four-letter word to him and then confessing he owned a Tesla.

That perhaps is the beauty and one of the wonders of the human mind — the capability to simultaneously hold two contradictory beliefs — such as when Wozniak jokingly quipped, “I think the people who brought us electronics should be killed or made to live with them.” Despite his tongue-in-cheek observation, it’s doubtful any of us want to roll back time when minds like Steve Wozniak are busy dreaming up a different tomorrow.

This article and photos were provided by the University of Southern Indiana.