Young at Art exhibit celebrates the next generation of Evansville artists 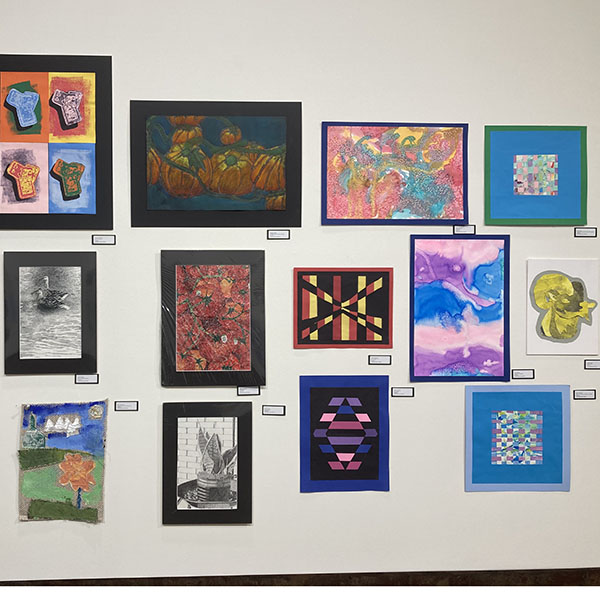 Peering into the windows of the Arts Council of Southwestern Indiana right now, you’re likely to see a rainbow-colored giraffe, a watercolor superwoman, and a house built on paper cups. Through April 1, more than 200 works of art from local kindergarten through eighth grade students are on display as part of the annual Young at Art exhibit. Gallery Director Andrea Adams says this is one of her favorite events of the year because of the creativity.

“If you look closely at every single piece and really analyze the details and look for creativity, you realize how free these little people are, in such a way that adults aren’t,” Adams says. “Sometimes their ego or fear of vulnerability gets in the way, but these kids are so able to be free with their color, their content, and just their ideas. That strikes me the most.”

The Arts Council accepts submissions from local teachers, individual households, homeschool students, and parents for the exhibit. This year’s Young at Art reception on March 12 welcomed more than 400 people in a two-hour window because each artist had their own “entourage,” Adams says.

Adams describes the exhibit as celebratory and says the impact on the community has been terrific.

“They get so happy,” Adams says. “We’ll be in our offices and hear the door open, followed by a little squeal because they see their work.”

Setting up for an annual show with more than 200 art pieces can be a logistical challenge. Adams says she groups the art by school and then spaces it out, sometimes needing to set everything on the floor to map it out.

All forms of media are accepted in the annual exhibit; the gallery is teeming with color and imagination. For example, Leo Robinson, a 7-year-old first-grader at the Montessori Academy of Evansville, created a sculpture of a plaster “baboonyasnake” — pronounced “buh-boon-yah-snake” — a life-size snake with a spotted body and a larger-than-life head and eyeballs.

“First, I glued and taped foil into the shape of a snake, then I covered it in plaster cloth strips, then I painted it,” he says. The project took him a couple of days from start to finish.

Some of the pieces of artwork also are for sale. Students had the option of listing their art for sale during the exhibit, and participating pieces have a price included with their information.

“Some of these kids, I think, might end up being on the walls in our local gallery and museum spaces as an adult,” Adams says. “So, it’s very exciting to see them flourishing and learning what it feels like to have their work shown.”